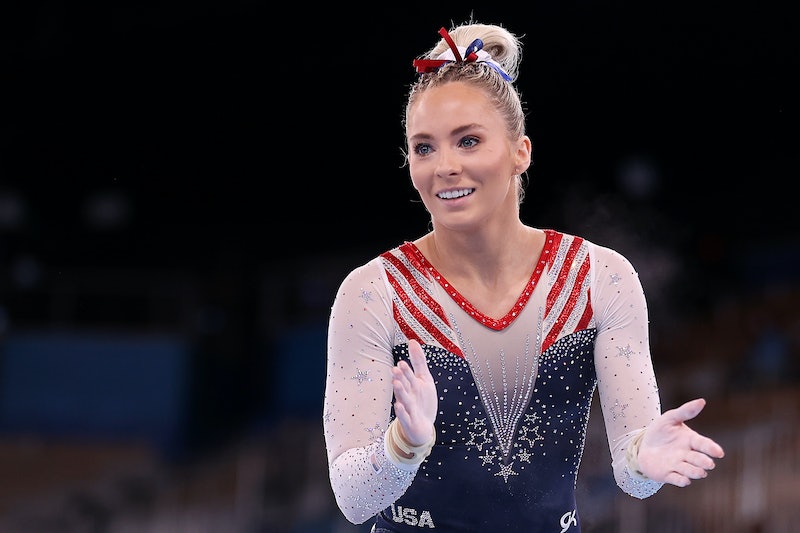 Five years after serving as an alternate in the 2016 Rio de Janeiro Games and one week after bidding an emotional goodbye to both the Tokyo Olympics and her elite gymnastics career, MyKayla Skinner got to live out her dream on her sport’s biggest stage. She had finished fourth behind teammates Simone Biles and Jade Carey in qualifying on July 25, meaning the two-per-country rule would keep her out of the event final. Just days later, though, she was tapped to step in for Biles in the event final — and she came away with the silver medal.

The 24-year-old gymnast’s path to the podium wasn’t easy. As an alternate for the U.S. women’s artistic gymnastics team at the Rio Olympics, Skinner never had the opportunity to compete or medal. Then, while training for Tokyo in January, Skinner contracted COVID-19 and was hospitalized with pneumonia. Her illness resulted in a month-long absence from training, per the New York Times. Yet even with these setbacks, the gymnast managed to make the U.S. Olympic team for the first time in June. Her role as an individual event specialist, however, meant she was not a part of the four-person team that won a silver medal on July 27, so it looked like her shot at Olympic hardware was gone after qualifying.

As Skinner was preparing to fly home to Arizona on July 27, her friend and teammate Biles made sure she knew to stay in Tokyo, per ESPN. Having withdrawn from the team final, Biles wasn’t sure she’d be able to compete in her event finals. She made the final call to opt out of the individual vault event and have Skinner replace her on July 30. Skinner went on to perform two strong vaults the next day, finishing only behind Brazil’s Rebeca Andrade, who beat her 15.083 to 14.916, according to Yahoo Sports.

After winning her medal, Skinner celebrated her Olympic accomplishment on Instagram, writing that there were many times she considered quitting “the last 2 years and throughout my entire gymnastics career.” She went on to note that the sport is hard “on your body and mind” but she’s “grateful I never gave up and that so many of you never gave up on me.” She added, “Unfinished business… FINISHED.”

“This has seriously been such an honor to be able to step in for Simone and be able to win this medal,” Skinner said on Sunday, Aug. 1, per ESPN. “To be able to do this for myself, and [I’m] so grateful for the opportunities to come back after being an alternate in 2016 and having [had] COVID and pneumonia and all the setbacks I have had.”

The week had been full of ups and downs for Skinner, who was distraught after failing to qualify. “It was devastating,” she said, according to Yahoo. “It took two days before I was like, ‘OK, I’m good, I did my best.’” Once Biles pulled out of the competition, it also took Skinner a moment to get back into a competitive headspace. “I thought, ‘Oh my gosh I am going to be competing again,’” she said. “To be able to change my mindset has been a little bit difficult.”

Many of Skinners’ gymnastics peers congratulated her on her long-awaited feat, including Biles, who shared a photo of her teammate winning the medal to her Instagram story. Biles wrote, “GO @mykaylaskinner2016 I’m so freaking proud of you.” Fellow Olympic medalists Laurie Hernandez and Jordan Chiles also congratulated Skinner, posting a photo of the gymnast accepting her medal to their own Instagram stories.

With the Tokyo Olympics behind her, Skinner is finally ready to say goodbye elite gymnastics. Her plan is to retire and move back to Arizona with her husband, Jonas Harmer, with whom she hopes to start a family, according to the New York Times. “I’m sad, but it’s time for me to move on with life,” she said. “I’m ready.”

More like this
The 2023 Super Bowl Commercials Feature A 'Breaking Bad' Reunion & Missy Elliott
By Alyssa Lapid
Twitter Is Shook As Tom Brady Holds Back Tears Announcing His 2nd Retirement
By Marina Watts
David Beckham’s Controversial Qatar Deal Skyrocketed His Net Worth
By Catharina Cheung
James Cameron May Come To Regret His 'Titanic' Door Experiment
By Stephanie Topacio Long
Get Even More From Bustle — Sign Up For The Newsletter
From hair trends to relationship advice, our daily newsletter has everything you need to sound like a person who’s on TikTok, even if you aren’t.