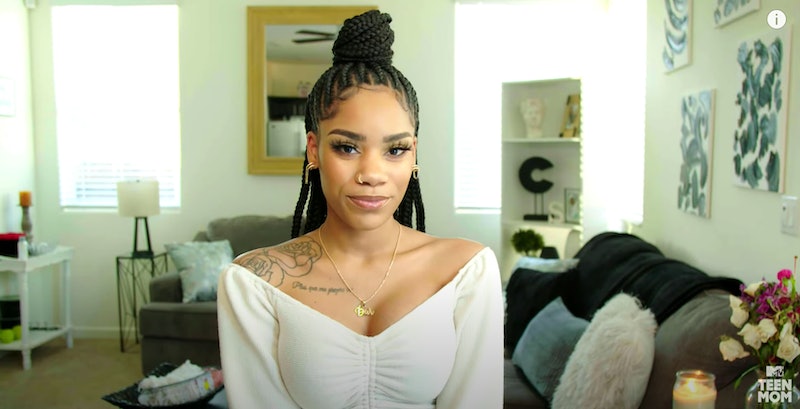 When Teen Mom 2 returns for a new season on Tuesday, there will be a new addition to the cast: 24-year-old Ashley Jones, who previously starred on Teen Mom: Young and Pregnant. She joins the show after original cast member Chelsea Houska announced her departure in late 2020, writing on Instagram that she and her husband Cole DeBoer wanted to focus on “developing our brand and taking things to the next level with new endeavors and expanding family businesses.”

Fans will get better acquainted with Jones — who has an adorable 3-year-old daughter named Holly — over the course of the season, but there are a few things to know about her going in. Her Instagram page is filled with pictures of the people most important to her, including her daughter, her family, and Holly’s father, Bariki “Bar” Smith. The latter is notable because Ashley’s on-again, off-again relationship with Bar was documented extensively during her time on Young and Pregnant, and a People-exclusive teaser for Teen Mom 2 shows him proposing to Ashley for the third time (the two previously broke off an engagement on Young and Pregnant). “I've messed up the other ones and I want to apologize and tell you that I appreciate you. You've been with me through a lot. I appreciate you for standing by me,” he says before getting down on one knee and opening up a ring box. “I would like to ask you again, will you marry me?”

The clip doesn't show Ashley’s response to the proposal, but a video Smith posted on Instagram in November speaks for itself: it features Ashley showing off a diamond ring on her left hand alongside the caption “I’m marrying her y’all.”

The couple hasn’t spoken much about wedding plans, but in a recent interview with Us Weekly, Ashley was clear that she’s not looking to give Holly a younger sibling anytime soon. “As of right now, I’m content with the one kid that I have,” she said. “I am a very school-driven person and like to be in school. I see myself being in school for a very long time.” She went on to explain that having two kids would require a level of “selflessness” that she wasn’t ready for.

“It’s really a 24-7 job,” Jones told Us Weekl of being a parent. “Even when my daughter was in Hawaii for a week with her grandmother, I couldn’t sleep. I was, like, physically getting sick without my kid. … I didn’t see a single friend. I didn’t have a single drink. I was stressed about my child, and she didn’t even care to talk to me on the phone. She was in my head 24-7. I was concerned for her well-being. And that’s what being a parent is.”

See more of what Ashley is like as a mom when Teen Mom 2 premieres on May 4.

More like this
Rachel Fuda Gave Birth Just Weeks Before 'RHONJ' Season 13
By Brad Witter
Brianna Revealed Why 'The Bachelor' Premiere Was Tougher For Her Than You Saw On TV
By Brad Witter
This 'Bachelor' Contestant Already Has A Lot In Common With Zach
By Grace Wehniainen
Yes, That's Christina From 'The Bachelor' In Taylor Swift's "Fifteen" Music Video
By Brad Witter
Get Even More From Bustle — Sign Up For The Newsletter
From hair trends to relationship advice, our daily newsletter has everything you need to sound like a person who’s on TikTok, even if you aren’t.