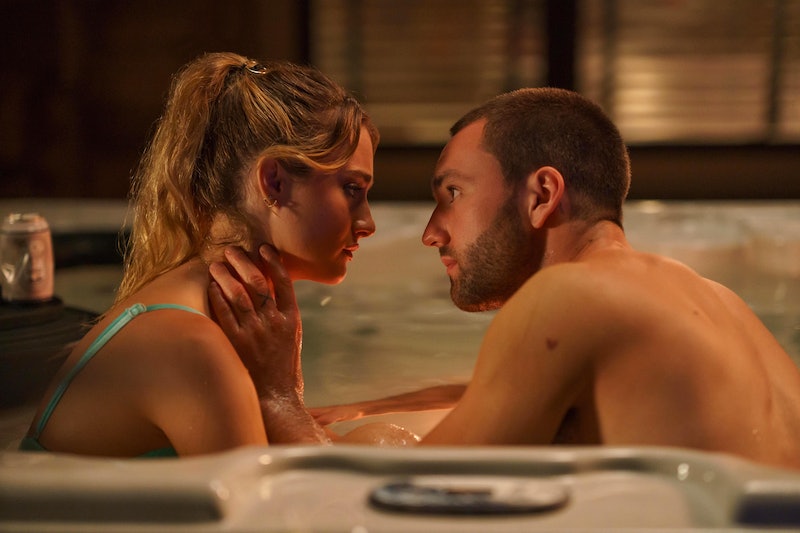 Tell Me Lies is the tale of a toxic relationship that goes on for far too long. It follows Lucy Albright (Grace Van Patten) and Stephen DeMarco (Jackson White), who fall in love in college and can’t break the cycle of needing each other, even when terrible secrets — like the unsolved death of their friend — threaten to keep them apart.

Based on Carola Lovering’s novel of the same name, showrunner Meaghan Oppenheimer told Bustle that she made “a lot of changes” to fill out the story for the show. “The structure is pretty different. I had to add a lot of plot,” she said. “The book is wonderful, but it's extremely internal. It's a lot [of] what people are thinking, and you have to find a way to externalize that.”

As a result of these changes, it wasn’t immediately clear whether there would be a Tell Me Lies Season 2. Lovering never wrote a sequel novel, but Jackson White told Popsugar that the show is "completely different" from the book. "I would love to do even more work on those people," he added, referring to Lucy and Stephen.

Grace Van Patten agreed there’s more to explore with Lucy and Stephen’s stories. "We're just waiting," Van Patten said. "Season 1 ends in such a way where there's so much to be filled in, and I would love to see what happens within those eight years, because as of now, it's a mystery." She also told Deadline that “it’d be cool if Lucy ends up as Stephen’s boss,” or “some dynamic where Lucy’s in charge but not in a relationship way.”

Of course, there have been shows that continued past their source material — hello, Big Little Lies — and it looks like Tell Me Lies will be one of them. The series was officially renewed for a second season on Nov. 29, Variety reports. Here’s everything we know so far.

Alongside Van Patten and White, we can expect Lucy and Stephen’s cast of friends to return: Bree (Catherine Missal), Pippa (Sonia Mena), Wrigley (Spencer House), and Evan (Branden Cook). We’ll also likely see CJ (Jessica Capshaw), Lucy’s mom, as the penultimate episode featured a major confrontation between the two of them. We might also see Diana (Alicia Crowder) and Drew (Benjamin Wadsworth) again, though their return would definitely spell more drama for Lucy and Stephen.

Season 2 could explore Lucy and Stephen’s messy lives after college, as it appears Season 1 doesn’t move beyond that time period, other than with the brief flash forward to Bree’s wedding.

There are also several plot lines that get set up in the penultimate episode. Drew is investigated by campus police after Lucy drops a note in the dean’s office that reads, “Ask Drew Wrigley about the night Macy Campbell died.” The note, which Lucy sent to protect Stephen, kicks off an avalanche of events. Drew becomes paranoid and starts a fight with his brother at a party, which leads to Wrigley falling off the balcony and breaking his leg. Wrigley accuses Pippa of sending the letter, and they break up. And then Pippa confronts Lucy, suggesting that Lucy can’t think straight when it comes to Stephen, and as a result, she can no longer trust her.

We also see Stephen drive out to where Macy died. He briefly sobs while looking panicked, suggesting to the viewer that he definitely knows more about what happened that night than he’s letting on. But he also seems pleased by the end of the episode, suggesting he may now be fine with letting Drew take the fall for whatever he did. In the first episode, we saw that Wrigley gets too drunk at Bree’s wedding after someone mentions his brother, so we can guess that whatever becomes of Drew isn’t good.

Finally, we see Lucy confront CJ about her cheating on Lucy’s dying father. While they seem to get close to reconciling, Lucy becomes angry when Stephen arrives, and it’s clear CJ doesn’t like him. When CJ reveals that she’s back with the man she cheated with, Lucy explodes and storms off. With both this confrontation and the one with Pippa, it’s implied that being around Stephen has made Lucy a more volatile and untrustworthy person — which definitely doesn’t reflect well on their relationship going forward.

As the series was just renewed, it’ll probably be a while before we see Lucy and Stephen again. Most Hulu dramas tend to take a year between seasons, so the earliest premiere date could be fall 2023.

This post will be updated as more information about Tell Me Lies Season 2 becomes available.

More like this
Everything To Know About 'And Just Like That...' Season 2
By Jack Irvin and Grace Wehniainen
'The Crown' Season 6 Has Suspended Filming "Out Of Respect" For The Queen's Death
By Bustle Staff
Pamela Anderson's Sons Brandon & Dylan Have Their Own Hollywood Careers
By Arya Roshanian
Netflix Shut Down 'Bridgerton' S3 Rumours About A “Very Dark” Storyline
By Bustle
Get Even More From Bustle — Sign Up For The Newsletter
From hair trends to relationship advice, our daily newsletter has everything you need to sound like a person who’s on TikTok, even if you aren’t.

This article was originally published on Oct. 26, 2022