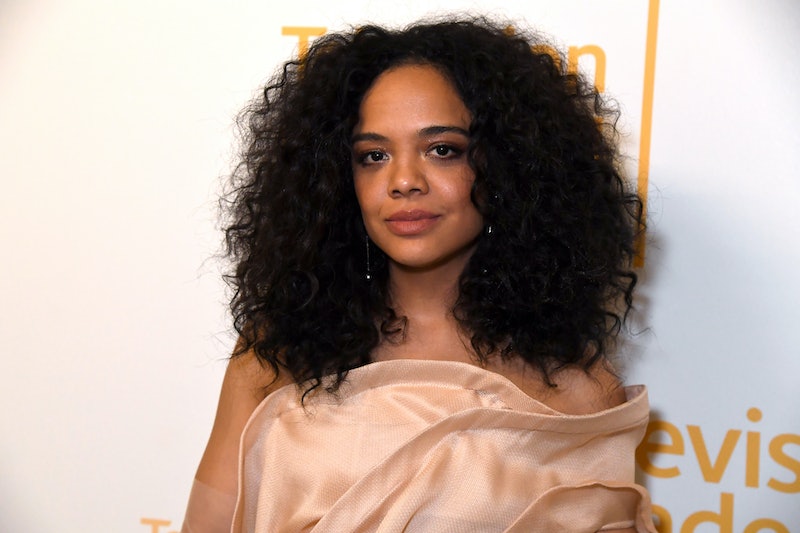 In an event that she called the "only way to end" 2020, Tessa Thompson revealed that she got into a car accident on New Year's Eve. The Sylvie's Love actor recounted the collision during an appearance on Jimmy Kimmel Live! on Thursday, Jan. 7, revealing that it was actually somewhat of an enlightening experience. Always the optimist, Thompson also expressed gratitude for simply being alive after the tumult of last year.

"I have been staying in [during the pandemic], although for New Year's Eve I was like, 'What could be safe?' I could drive from my house to one other house,'" Thompson recalled. "So I drove up a mountain to go to a cabin, and I thought, 'This will be totally safe because I won't see anybody,' but I got into a car accident." The actor said that the driver who collided with her — one in a "big monster truck" — had been "very lovely in the end," and that fortunately, neither of them was hurt.

"I feel like I'm used to car accidents because I was born and raised in Los Angeles, so it feels like accidents are my birthright," Thompson quipped. "I've had many of them, but this was a pleasant one. I think after this year, there's such gratitude at being alive. It was sort of the sweetest, loveliest accident of all the ones I've had, in a way.” She added, "Also, it made total sense. The only way to end this year would be to get into a car accident."

Thompson also touched on starring opposite Kerry Washington's husband, Nnamdi Asomugha, in her new Amazon Prime romance drama film, Sylvie's Love. "Kerry and I are friends," Thompson said. "And actually, Kerry and I were doing a movie I think when they first were falling in love." Though she didn't specify what movie, she and Washington both starred in 2010's For Colored Girls a few years before the pair's nuptials.

In any case, Thompson's titular role in the Amazon film has been heralded by critics and viewers alike. The film follows the summer romance between the daughter of a record store owner (Thompson) and an aspiring saxophonist (Asomugha) in 1950s Harlem. In an interview with IndieWire last month, Thompson reflected on how the film pays homage to Black actresses of the past. "It's not lost on me that I literally would not be able to do what I do now if there weren't all of those women before me," she said. "Sylvie's Love likes imagining what kinds of stories could have existed had Hollywood been more interested at the time in all these incredible women of color."