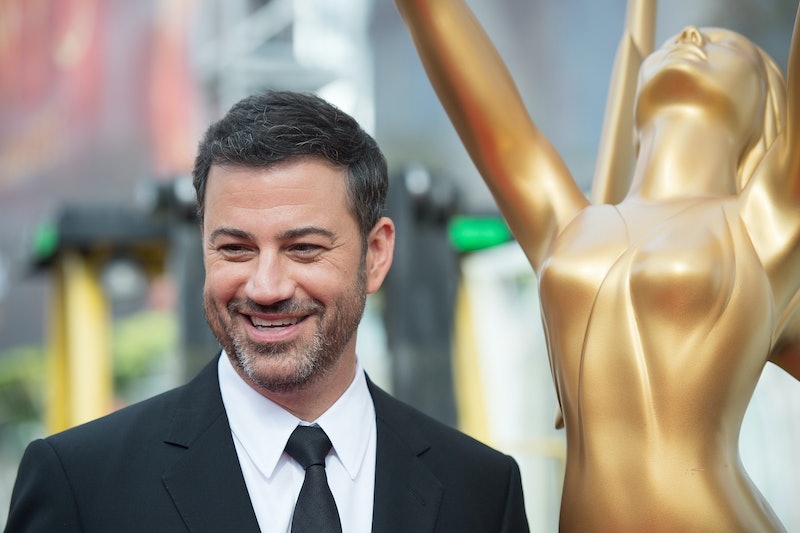 Meme-able audience reactions, standing ovations, and red carpets are not COVID-friendly, but for the 2020 Emmys, the show must go on. As such, the 72nd Annual Emmy Awards, hosted by Jimmy Kimmel will air live on ABC on Sunday, Sept. 20, but they're going to be very different than what we're used to. Producers are trying to keep the award show as normal as possible, even if nominees are at home in pajamas instead of in full glam somewhere in Los Angeles.

If the 2020 Emmys go well, they could become the blueprint for all of the big 2020-2021 award shows — most notably the Golden Globes and the Oscars. If they go terribly, well, that will shape award season in a whole other way. Here's everything you can expect from the new, quarantine-style Emmys, and what it might mean for award shows to come.

The Emmys will indeed air live on Sunday — or at least, as much as they can be. Kimmel will be hosting live from the Staples Center, which was reportedly chosen due to its vast size, allowing crew members to work more safely under COVID-19 health guidelines. Several nominees and presenters will appear live as well, although which ones have not yet been confirmed, and they'll be broadcasting from all across the country.

Emmys executive producer Reginald Hudlin told Variety that Kimmel and crew are embracing the challenges that come with doing a live broadcast amidst the COVID-19 pandemic. "Jimmy loves to work live, and we love to work live," he said. "This is a show that will still very much be, whenever and however possible, a live show. There’s a lot of challenges that come with doing a live show in a COVID environment. But we’re not running from those problems, we’re embracing them."

Will There Be An Emmys Red Carpet?

The Emmys will not have a red carpet this year — not even a virtual one, like the recent MTV Video Music Awards. According to Variety, when Emmys producers decided to not let many people in the Staples Center besides Kimmel and required crew members, they also nixed ideas for a red carpet and arrivals pre-show, choosing instead to focus on the actual ceremony. "Ultimately it felt like we should stick to what’s on our plate and get that done," Hudlin said.

There will be an Emmys pre-show, hosted by Jeremy Parsons and Makho Ndlovu, streaming live from 7-8pm ET, courtesy of Entertainment Weekly and People. According to EW, fans watching the pre-show can expect interviews with Kimmel and a handful of nominees.

Will Acceptance Speeches Be Pre-Recorded?

For the Creative Arts Emmys, all nominees were asked to pre-record acceptance speeches, with only the actual winner's speech going live on the air. However, this will not be the case for the big show. Nominees have already been warned that the show will go live from their respective homes or locations should they choose to participate in the big night, meaning all speeches will be made live. But fans shouldn't expect technical glitches or buffering to get in the way. Producers are aiming to equip each nominee with a high-definition camera to use if they win, which will be run by Emmys crew or family members, depending on their comfort level. Sites like Zoom, Skype, and FaceTime are, for the most part, forbidden. "We’re not trying to make the Zoomies," producer Ian Stewart told Variety.

Despite the circumstances, Emmys accountants will not let producers see the winners before their names are announced on television, meaning that if a winner decides not to give their speech live, they may not be able to deliver one at all. "We thought maybe this year was an extraordinary situation, but unfortunately there’s no leeway on that," Stewart said. "We will find out when everyone else finds out. Which is the right way to do it, it’s just annoying."

Is There A Dress Code?

Given that most nominees and presenters won't actually be present at the Staples Center, the need for heels, gowns, and velvet tuxes has diminished significantly. Luckily, the show is leaning into this new development, rather than trying to force a dress code. In a letter sent to nominees, executive producers and Kimmel told nominees who wanted to appear on camera that they could wear whatever they feel like.

"Our informal theme for the night is 'come as you are, but make an effort,'" the statement read, according to People. "If you want to be in formal wear, we’d love that, but equally if you’re in the UK and it’s 3am, perhaps you want to be in designer pajamas and record from your bed!" Some nominees like Jennifer Aniston are already preparing their looks. "Now, I’m just gonna have to figure out what MASK I’M GONNA WEAR," she teased while acknowledging her nod for The Morning Show on Instagram.

While the full presenters list has yet to be revealed, ABC has announced that Oprah Winfrey, Gabrielle Union, America Ferrera, Issa Rae, Anthony Anderson, Lena Waithe, and J.J. Watt will present at the Emmys, with more names to be announced later. Producers are reportedly hoping to have some presenters appear live from the Staples Center, but are preparing for others to do it remotely.

Will The Emmys' "In Memoriam" Tribute Be Live?

One thing that can likely be pre-recorded with little complaint is the Emmy's annual "In Memoriam" tribute, honoring the many actors and entertainment figures we've lost in the past year. ABC has announced that H.E.R. will take on this year's special In Memoriam performance, but did not reveal whether the number would be live from the Staples Center or taped beforehand.