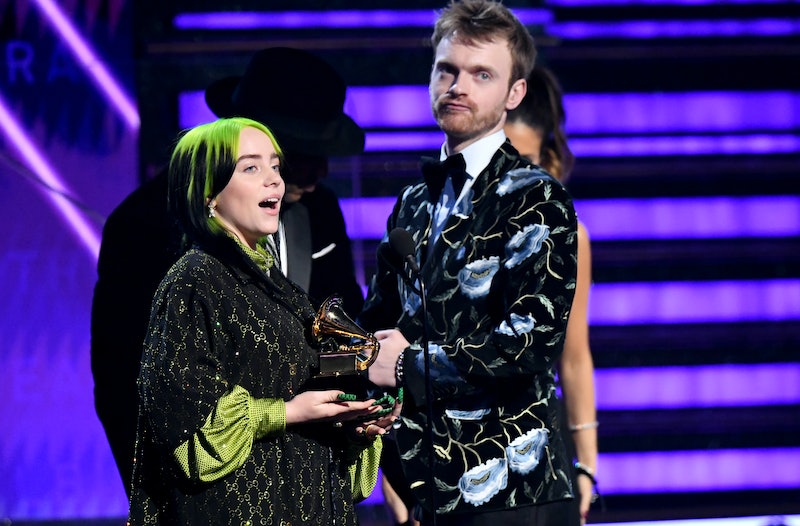 There wasn't much to do this past year amid the ongoing coronavirus pandemic, but at least we had good music. Sadly, we'll have to hold off on celebrating some of our favorite songs and albums because the 2021 Grammys have officially been postponed. On Tuesday, Jan. 5, the Associated Press confirmed that the event would not take place on Jan. 31 as originally planned — and it's all because of a recent surge in COVID-19 cases in Los Angeles.

The star-studded event was set to take place at the Staples Center at the very end of the month, and in November, it was announced that Trevor Noah would be the host. However, with COVID-19 cases still on the rise, the Recording Academy decided to push the ceremony to March 14. Still, the new date has brought with it a new challenge, as the Screen Actors Guild Awards are also slated to take place that same night, which could prevent stars from attending both ceremonies.

"We are extremely disappointed to hear of the conflicting date, March 14th, announced today for this year's Grammy Awards telecast," SAG-AFTRA told Entertainment Tonight in a statement, after news of the postponement broke. The organization — who announced the date for the SAG Awards back in July — also explained that they will be "in contact" with the Recording Academy to speak about the conflicting dates, which means that there's still a possibility that the date could change once more.

Per the Hollywood Reporter, many precautions were put in place so that the event could be safely held this month. For example, only presenters and performers would be allowed in the arena and there would be no audience or nominated artists in attendance. Unfortunately, the city's recent rise in coronavirus cases has left the Grammys organizers with no choice but to hold off for a while longer.

According to the New York Times, Los Angeles' weekly average of new cases per day is at 16,193, which is the highest it's been yet and roughly 12 times higher than the weekly average from Nov. 1. The paper also reported that more than 21,000 COVID-19 patients were in the hospital on New Year's Day in California, which was 26 percent more than there were just two weeks ago. Per a New York Times database stat published on Dec. 29, the state has had more than two million confirmed cases and 24,331 deaths in recent weeks.

On Monday, Dec. 28, Gov. Gavin Newsom said during a press briefing that the stay-at-home orders would remain in place for Southern and Central California even though they were set to expire. "Things, unfortunately, will get worse before they get better," he said before commenting on the hospitals in the region being overwhelmed. "Routine E.R. care is being slowed," he said. "The impact of this pandemic is being felt on the entire hospital system, and could impact each and every one of us — God forbid."

Although the Grammys won't be happening this month as music fans had hoped, they still have a lot to look forward to whenever the awards show can be held safely. This year's performers have not yet been announced, but Beyoncé earned a whopping nine nominations while Taylor Swift, Dua Lipa, and Roddy Ricch trailed closely behind with six each. Billie Eilish, Doja Cat, Megan Thee Stallion, Justin Bieber, Noah Cyrus, Lady Gaga, and Phoebe Bridgers are among the other stars recognized by the Recording Academy this year.