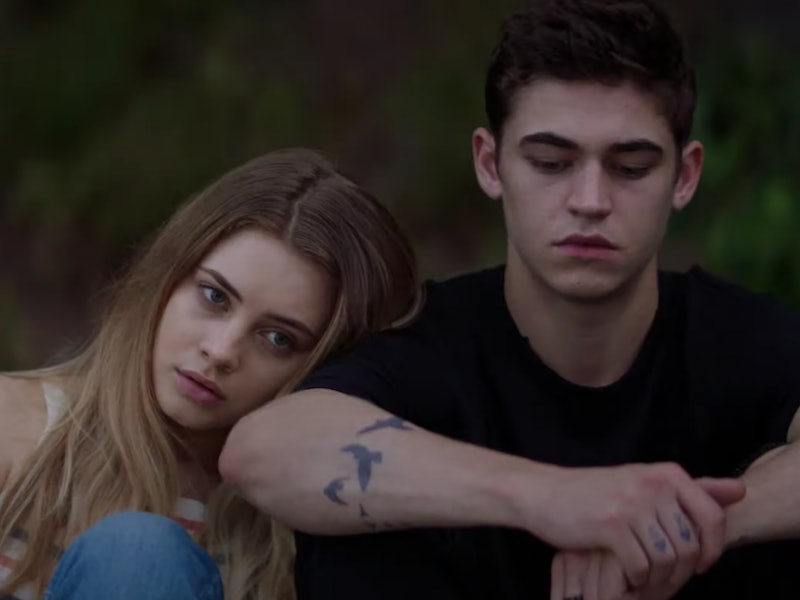 The film adaptation of Anna Todd's After took audiences by storm in 2019, and its sequel is now headed to a screen near you. So now is the perfect time to catch up on the After We Collided book ending, because the film comes to U.S. theaters and video-on-demand on Oct. 23. Spoilers for After We Collided ahead.

After We Collided is the second of five novels in the After series, which centers on young lovers Tessa and Hardin. The series began as a 2,500-page Harry Styles fanfiction on Wattpad, which Todd edited for print after signing a book deal with Gallery Books, an imprint of Simon & Schuster. The biggest change? Transforming Styles into Hardin Scott: the brooding, rough-around-the-edges Brit that college freshman Tessa falls in love with.

The novel picks up where After left off — the heartbreaking revelation that Hardin only dated Tessa to beat his friend Zed, who bet that Hardin couldn't get Tessa to sleep with him. The bad boy has fallen in love with the good girl, but she can't bring herself to trust him yet. The couple get back together and break up again several times over the course of the novel, as Tessa learns about Hardin's sexual history — which includes a sex tape — and finds herself drawn to Zed. Nothing steamier than kissing happens between the two of them, but a Hardin-Tessa-Zed love triangle develops, nonetheless.

After a lot of scenes featuring Hardin's drinking problems and violent tendencies, the tensions in the love triangle come to a head. Zed interferes in his friend's communications with Tessa, causing a fight to break out. Hardin learns that Tessa has kissed Zed, and he seeks him out. After Hardin puts Zed in the hospital and gets himself arrested, Tessa must act as a mediator to convince her boyfriend's victim not to pursue assault charges against him.

The bumps and crags in Tessa and Hardin's relationship flatten out for a while, and couple are still together at the end of the novel. As with After, however, the After We Collided book ending leaves off on a major cliffhanger. The novel ends with Tessa spotting her father — whom she had previously heard was moving to their area — living on the street.

The After We Collided movie may make a few changes to this chapter of Tessa and Hardin's story, however. The trailer focuses heavily on Trevor, Tessa's new co-worker, played by Dylan Sprouse (Banana Split). In the novel, Trevor develops feelings for Tessa, and at one point Hardin even believes she's sleeping with him, but he's less of a presence in their lives than Zed. Will Tessa and Trevor have a steamier set of interactions in the film adaptation of Todd's novel? You'll have to watch to find out.

After We Collided comes to U.S. theaters and video-on-demand on Oct. 23. The film stars Josephine Langford (Wish Upon) as Tessa, Hero Fiennes Tiffin (The Silencing) as Hardin, and Samuel Larsen (Glee) as Zed. Langford and Fiennes Tiffin have signed on to film the next two films in the series, After We Fell and After Ever Happy, which are slated to premiere in 2021 and 2022. No film adaptation for Before, the fifth book in Todd's series, has been announced at the time of this writing.

More like this
Your Guide To Watching 'Everything Everywhere All At Once' In The UK
By El Hunt and Sophie McEvoy
'Mayfair Witches' Already Changed 2 Major Characters From The Books
By Grace Wehniainen
The Razzies Set Age Limit After Backlash For Nominating A Child For Worst Actress
By Radhika Menon
Yes, You Can Stream ‘To Leslie’ In The UK Now
By Sam Ramsden
Get Even More From Bustle — Sign Up For The Newsletter
From hair trends to relationship advice, our daily newsletter has everything you need to sound like a person who’s on TikTok, even if you aren’t.