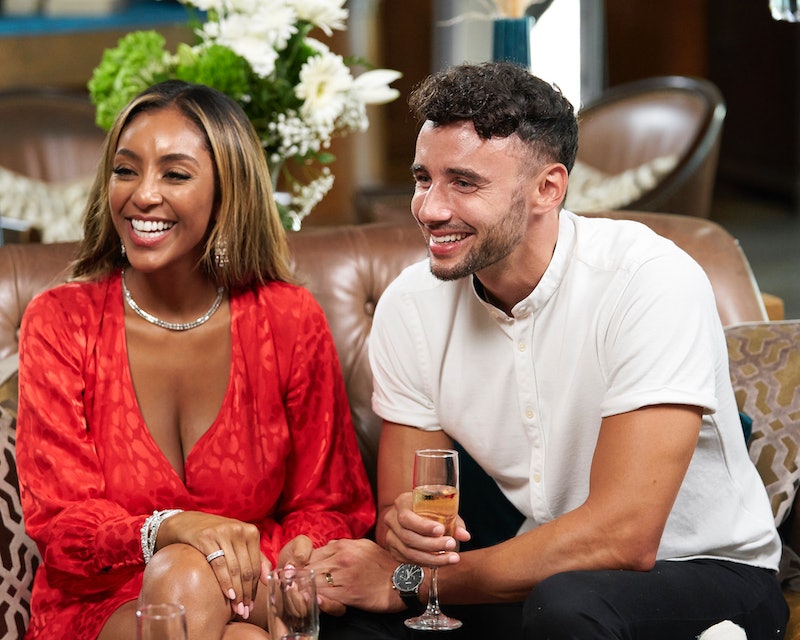 Viewers did not foresee Bachelorette frontrunner Brendan Morais' self-elimination in the penultimate episode of Tayshia Adams' finale, but it happened. The divorcée explained that he just wasn't ready to propose again, citing a need to heal after the fallout of his first marriage. After his emotional departure, Brendan chatted about the decision with Rachel Lindsay and Becca Kufrin on their Bachelor Happy Hour podcast — and admitted to "self-sabotage" and regret over how things had unfolded.

"I came to the realization that I don't know if I'll be able to get down on one knee at the end of this," Brendan said on Tuesday, Dec. 22, adding that Tayshia is "perfect" but that he had more healing to do than he had originally thought. "I most certainly self-sabotaged. I brought this upon myself and I definitely have certain regrets as far as — not necessarily something I did or said — but regrets as a whole that it didn't play out a certain way."

An unamused Rachel agreed that he should have regrets about how things went down. "I hear you, but everyone knows what this show's about," she said. "Every time you accepted a rose at the rose ceremony, that's one step closer to you moving towards an engagement." The former Bachelorette added that there "are no tricks" here, maintaining that it's a cop-out to cite his hometown and that particularly awkward Neil Lane date as factors behind his decision. "It sounds like you were never ready for this," Rachel added.

"As a whole it would appear to be a selfish move on my part on how things ended," Brendan said when pressed by Rachel. "I was trying to be as selfless as possible as far as not taking this to the end with Tayshia and informing her of this and not being the last guy and dropping this bomb on her then."