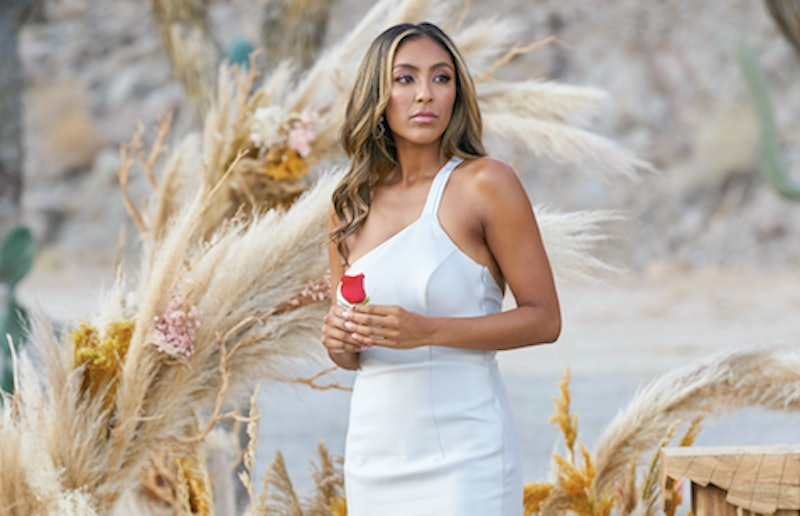 The Bachelorette's ultra-fast timeline may not have fazed Dale Moss, but for one of Tayshia's contestants, the pressure to propose was just too much. During the Monday, Dec. 21 episode, Brendan Morais decided to go home before his fantasy suite date with Tayshia after he realized that he just wasn’t ready to get down on one knee.

Like Tayshia, Brendan got married and divorced at a young age. But whereas that experience gave Tayshia more confidence about their relationship — she even admitted she felt that Brendan was "it" for her after their first one-on-one — it made Brendan have doubts about whether he was ready to propose. That was only compounded when Tayshia took him to look at engagement rings with Neil Lane during their fantasy suite date. And when they sat down for dinner, Brendan admitted that he wasn't as ready to get married again as he originally thought.

"I’m not gonna lie, this has been challenging the past couple of days and past few weeks for me," he said. "When I came here, I thought I was ready [to propose] and I knew I was ready in my own mind." Brendan then explained that his desire to settle down and have a family kept him from realizing that he hadn't fully healed from the trauma of his divorce. "There’s a big part of me that’s still broken. There’s a big part of me that still needs time to heal ... I think there are pieces of myself that I need to pick up."

While Brendan said he could see a future with Tayshia, he ultimately realized that he wasn't in the same place as her. "All I want is to give you my whole heart, but as I sit here today, my heart isn’t whole," he admitted. "It really breaks my heart because you deserve a man that is complete. You deserve a man who is healed from his past and unfortunately, right now, I'm not that man."

Tayshia responded with grace, telling Brendan that she understood where he was coming from. "A younger version of me would have been pissed off at you, but I know what you’ve gone through," she said, holding back tears. "As much as I would love to be with you at the end of all of this, if you’re not ready, that’s not for me to push you to do." However, she was clearly devastated by the breakup, revealing that she had envisioned herself choosing Brendan since the very start of her season. "Brendan is definitely someone I saw a future with and I really thought I was going to be with him," she said. "I really thought I was going to end up with him. Since our first one-o- one, he’s the one that made me put my walls down. I just felt safe with him."

Tayshia wasn't the only one who was heartbroken by the breakup, as Brendan had no idea how strongly she felt about him. "Tayshia told me that she really could picture me as her husband at the end of this, that she really could picture a life with me. That’s the first time that she has expressed that to me, so it makes it that much harder," he said as he drove away. "Me not being ready comes at a huge price. I’m giving up the opportunity to have a relationship with Tayshia, and ending something really special before it started."