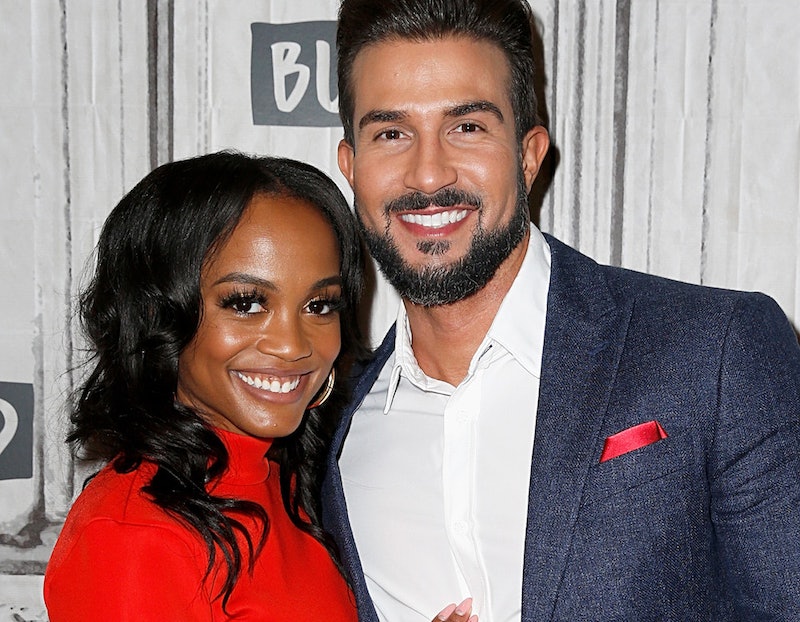 Long-distance relationships require a lot of work, but former Bachelorette Rachel Lindsay said she and husband Bryan Abasolo are doing just fine on the marriage front. Rachel, a correspondent for Extra in Los Angeles, and Bryan, a chiropractor in Miami, both recently opened up about their bicoastal marriage during an interview on the "Dr. Abs Healthcast" podcast on Wednesday, Oct. 21. While their marriage is admittedly not very traditional, Rachel explained that the two are ultimately working towards a larger goal: family.

"I didn't move to L.A. because I just love the city," Lindsay said, addressing her husband in the podcast. "You're focusing on your practice and building it to a place you want it to be, and I am here in L.A. working for Extra and doing other things, and we're doing this to eventually bring ourselves together." She added that the two "have a timeline for ourselves," and despite the distance, they "know where we're going, we know where we're headed and we know what we're trying to build as Abasolos."

Although their long-distance relationship might contradict what she previously said about not putting a career over husband on The Bachelorette, Rachel wanted to set the record straight. "I can see from the outside looking in how it's like, 'Wow, when Rachel was on the show she talked about not wanting to put her career over her husband,' but the thing is, I'm not putting my career over my husband," she said. "I'm putting my family first. Part of that is putting us in a position to succeed and put our family in the best position."

Bryan echoed his wife's sentiments on the podcast. "For me, I want you to go do your thing in L.A.," he said. "I want you to be as successful as possible. You're killing it right now, and I love it."

Rachel and Bryan tied the knot in August 2019 after meeting on Rachel's season of The Bachelorette two years prior. The couple opted for an intimate, untelevised wedding, but shared a few first-look photos with People from the ceremony at the Royalton Suites Cancún in Mexico. Before the big day, Rachel — who first appeared on Nick Viall's season of The Bachelor — opened up about her instant connection with her now-husband in an interview with E! News. "We just connect in a certain way," she said. "My journey with Bryan has been surreal, in the sense that I never, coming onto the show, thought I would meet a Bryan ... So, it's just been a really beautiful surprise."