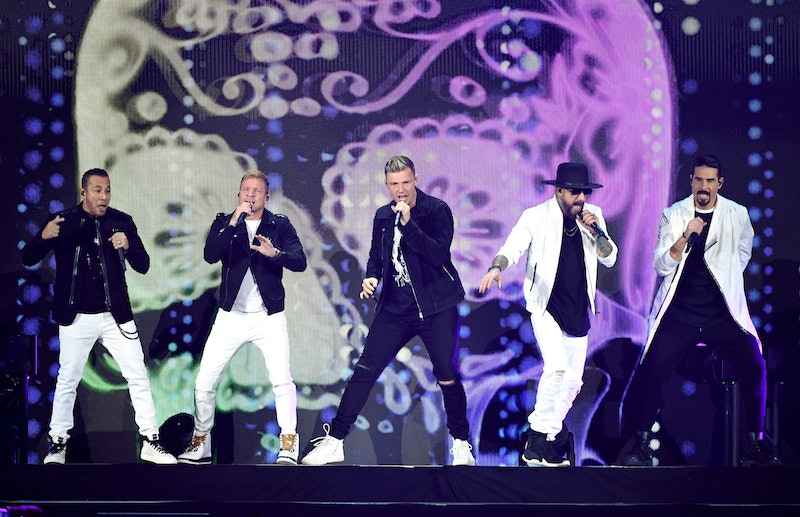 There’s no boy band rivalry here. The Backstreet Boys want *NSYNC to be guests on their new radio show — and our ‘90s boy-band-loving hearts are squealing. The group composed of Nick Carter, AJ McLean, Brian Littrell, Kevin Richardson, and Howie Dorough launched a radio show, All I Have to Give Radio, on Apple Music on Aug. 18 to give fans some much-needed quarantine joy. The show will explore their respective careers, share stories from yesteryear, and even feature some ardent fans.

As for dream guests, however, Carter told Cosmopolitan in a new interview that it would be “a lot of fun” to have fellow boy band *NSYNC (composed of Justin Timberlake, JC Chasez, Chris Kirkpatrick, Joey Fatone, and Lance Bass) appear as guests. "I was supposed to do an interview with Chris Kirkpatrick a few months ago! I'm great friends with Chris, Joey, and Lance [and] all of them, honestly,” Carter revealed. “We all have great relationships with those guys, and I think it would be a lot of fun to bring them on.”

Carter also admitted that “nobody knows what's gonna happen with the show” right now since “it’s like an experiment.” Though he still maintained that it could “grow and turn into something that people truly enjoy,” and, “at that point, heck yeah, I'd bring in the *NSYNC guys.” He added, “For the fans' sake, yeah — that would be awesome.” We concur, it would be awesome.

Carter also revealed another key piece of information during the interview: the Backstreet Boys have recorded a new, not-yet-released acoustic album — however, everything’s at a standstill due to COVID-19. “I don't know if we can do something with that,” Carter said of releasing album. “Before the pandemic, we were right in the middle of touring for DNA — that was our first number one album in a while and people were super excited about that,” Carter said. “The pause will continue until everything is safe again.”

The boy band released DNA, their tenth studio album, in January 2019. A month after its debut, DNA topped the Billboard charts and gave the band their first No. 1 hit in over two decades. They kicked off their DNA World Tour in May 2019, which had originally been scheduled to span America, Europe, Asia, and Australia and conclude in September 2021.

In an interview with Bustle back in February 2019, the Backstreet Boys reflected on their success and celebrated the role that nostalgia has afforded it. "We've embraced who we are. We embrace what we represent. We embrace the certain amount of nostalgia that comes with us," Carter said. "And with that, we're able to take that power of knowing ourselves and then use it in a way to evolve and to grow, by adding new music at the same time."