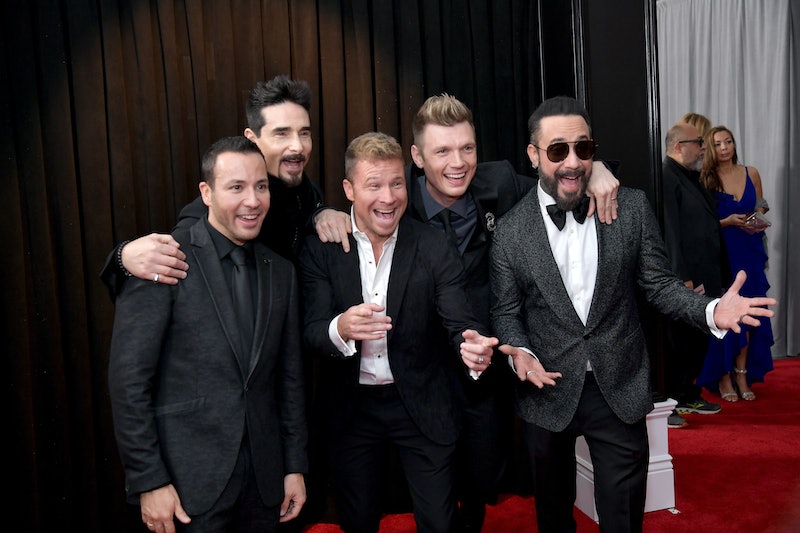 On Feb. 4, 2019, the Backstreet Boys' new album, DNA, topped the Billboard charts. It's the band's first No. 1 record in almost two decades, according to Rolling Stone, and their third total, following 2000's Black & Blue and 1999's Millennium. While it's tempting to declare that DNA's success means "Backstreet's Back," the fact is, to quote one of their hit songs, they were "Never Gone." DNA isn't a comeback album, but proof that the Backstreet Boys have finally found their place as fully-grown adult boy banders.

When I meet with the guys at their label's New York office, a few days before the album's release, my fangirl heart immediately recognizes them as the heartthrobs I grew up watching on TRL. But the Backstreet Boys — Nick Carter, 39; Howie Dorough, 45; Brian Littrell, 44; AJ McLean, 41; and Kevin Richardson, 47 — have no delusions about their ages or the fact that their success as a band relies partly on a healthy dose of nostalgia. "We've embraced who we are. We embrace what we represent. We embrace the certain amount of nostalgia that comes with us," says Carter. "And with that, we're able to take that power of knowing ourselves and then use it in a way to evolve and to grow, by adding new music at the same time."

It's a balance the group is ready to take on the road. After they wrap up their "Larger Than Life" Las Vegas residency in April, they'll hit the road for the DNA World Tour — their biggest in 18 years. It's bound to be way different than their tours in the past; after all, the album is a far cry from the tunes that made them pop stars at the turn of the millennium. Combining several different genres, from country to EDM, DNA "represents our influences," says Richardson.

But, as McLean points out, the album also feels familiar, going "back to those harmonies" OG fans love so much. The third track, "Breathe," is even entirely a capella, a style utilized by the band often in the late '90s. Still, despite these throwbacks, there's no denying that BSB has changed over the decades. Take their most recent single, "No Place." Although the ballad sounds like their 1997 hit "As Long As You Love Me," Littrell says they couldn't have recorded the song in the '90s. On the track, the Boys sing, "I've been all around the world, done all there is to do / But you'll always be the home I wanna come home to." It's a romantic sentiment only fitting for people with families and long careers; the guys' kids were even featured in the "No Place" music video.

"You know, when myself and Kevin and Howie were sharing an apartment together, yeah, I wouldn't sing about ‘No Place,’" says Littrell with a laugh. "We're all fathers and we have a reason to go to work every day, we have a reason to love and be passionate about what we do."

Even the fact that the band chose to feature their families in a music video shows just how much has changed over almost three decades. Back in the '90s and early '00s, at the height of their fame, the guys were often told to hide personal romantic relationships in order to appear available to fans. "Our managers would tell us, 'Yeah, you have to not have a girlfriend,'" Dorough recalls, with McLean adding that they'd have to get off of their tour buses separately from their partners, as to not appear coupled up. Littrell sums it up: "It sucked, to be honest with you."

Now that the men have grown up and settled down, though, the pressure to conceal their personal lives has disappeared. In fact, these days, they share more of their lives than ever — only instead of it being revealed via invasive paparazzi, it's on their terms through videos like "No Place" or their various social media accounts.

Yet the Boys all have different approaches to how much they choose to share. "Nowadays, people can get caught doing anything. And it can really take a toll on their careers," Dorough says. In 2001, in the wake of 9/11, Richardson was asked how he felt in the wake of the attacks and said, "I just think we are a little bit of an arrogant nation; and maybe this is a little bit of a humbling experience," as reported by NBC News.

Looking back almost 20 years later, Richardson says he understands the consequences for upsetting people, even unintentionally, on such a mass scale. "There were radio stations saying that they were going to have a Backstreet Boys album burning and CD burning," he recalls. "I was asked how it made me feel, and I expressed how it made me feel. And a lot of people didn't like that... so, you just have to be prepared for the consequences, 'cause people aren't going to see eye to eye for everything you have to say."

McLean agrees, but he adds that he sees the band's platforms as an opportunity. "You are put up on the pedestal," he says. "So, you can use that for good... or for evil! I think we always try to use it for something good." One of the ways the group uses social media for good is to keep their relationship with fans strong. Over the years, the Boys have gone through ups and downs — Carter identifies the six years after Richardson left the group in 2006 and before he returned in 2012, as full of low points, and, more seriously, there was also the sexual assault allegations against Carter in 2017, for which he has denied and was not charged — but one thing that hasn't changed is the loyalty of the BSB fandom, Although the singers admit that the rabid energy of their largely female fans has calmed down significantly since the band's heyday in the '90s, that's not necessarily a bad thing.

"There's a different level of respect," McLean explains, noting that one perk of aging in a boy band is that their fans have also matured a little bit. Most of the guys are pretty relieved by this development, though McLean is quick to point out that they still get the mobs running after them from time to time. "Which is awesome. I mean, what guy wouldn't want a bunch of girls yelling at him?" he says. "Let's just call a spade a spade. It's fun — still."

The days of people taking over Times Square to celebrate an album release and a chance to catch a glimpse of the Boys on TRL may be long gone, but that doesn't mean that fans aren't still showing up when it counts. DNA becoming the band's first number one album in almost 20 years proves it, as does the fact that the guys are embarking on their biggest world tour in years. As it turns out, life for an adult boy band can actually be pretty good.

More like this
The First Trailer For 'That '90s Show' Includes So Many Nods To The Original Series
By Jack Irvin, Alyssa Lapid and Grace Wehniainen
Marcus Mumford, Open Book
By Ilana Kaplan
How The Thanksgiving Episode Of 'Gossip Girl' Changed Pop Culture History
By Gabrielle Bondi
Paris Hilton’s Tweet About The 2006 “Holy Trinity” Photo Will Make You Feel Old
By Marina Watts
Get Even More From Bustle — Sign Up For The Newsletter