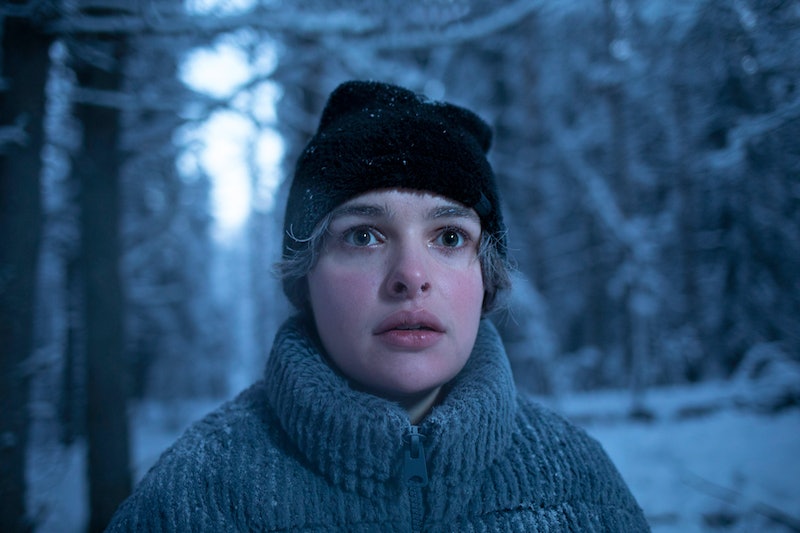 Premiering in the United States on Feb. 22, HBO Nordic's Beartown brings Fredrik Backman's bestselling novel of the same name to the small screen. The series stars Miriam Ingrid (Get Ready with Me) as Maya, a teenager who is raped by an older boy — the star athlete of the local hockey club her father manages. With the 2020 series finally landing on this side of the Atlantic, now is the perfect time to revisit the Beartown book ending, which looks 10 years into the main characters' future. Major spoilers for Beartown follow.

"Late one evening toward the end of March, a teenager picked up a double-barreled shotgun, walked into the forest, put the gun to someone else’s forehead, and pulled the trigger." So begins Fredrik Backman's 2016 bestseller, Beartown. Set in the eponymous small town, called Björnstad in the original Swedish, the novel centers on six teenagers whose lives are all intimately connected to the local hockey rink.

Maya, the 15-year-old daughter of the Beartown hockey club manager, spends her time playing guitar, hanging out with her BFF, Ana, and crushing on Kevin: the 17-year-old star of Beartown's junior hockey team. Kevin's best friend is Benji: a closeted gay boy whose hockey skills are good enough to go pro.

Maya's childhood friend, Amat, is in love with her and also plays on the junior team. He becomes friends with Bobo, a large hockey player with a tender heart, after the party at which Maya is attacked. Amat's best friend, Zacharias, isn't as talented a player as the others, but proves himself to be a loyal friend.

After Beartown wins its semifinal match, Kevin throws a house party to celebrate. Drunk and nursing a mutual attraction, he and Maya head upstairs to smoke pot and get some privacy. She consents to kissing, but when she refuses to take things further, Kevin rips her clothes, chokes her until she begins to black out, and rapes her.

Meanwhile, Amat's busy asking after Maya when Ana tells him that she's in Kevin's bedroom. He walks in in time to see his teammate taking advantage of Maya. Amat's entrance distracts Kevin and gives his victim time to escape, but not without the marks of his violence.

Maya's accusation and Amat's testimony are enough to get the star player arrested ahead of the finals, but not enough to convince local police to prosecute. Beartown begins to turn against Maya and Amat, and things get worse when the junior team — missing its star player — loses the finals. When several hockey players attack Amat, Bobo comes to his rescue. And as the town divides itself over the issue of Kevin's crime, Benji severs all ties with his former best friend.

On a snowy night, Maya steals a shotgun and ammunition from Ana's father and leaves a simple note in its place: "Happy, Ana. In ten years' time I see myself being happy. You, too." She confronts Kevin at the jogging track, and he does not try to run, though he does plead with her to spare his life when she puts the gun to his forehead. She pulls the trigger, only to reveal to her rapist that the weapon was never loaded.

Ten years later, Kevin and Maya run into one another again. They don't speak, but the encounter prompts Kevin to explain to his wife how he knows Maya, now a famous musician, and what transpired between them.

The season after they lose the finals, four hockey players — Amat, Benji, Bobo, and Zacharias — are charged with teaching younger children to skate at the ice rink. "In ten years' time," we're told, "two of them will be playing [hockey] professionally. One will be a dad. One will be dead."

Unfortunately, it's Benji, the boy with "sad eyes and a wild heart," who will die. Although we aren't given many details about the young man's death, Backman writes of "a hockey puck on a gravestone in Beartown," inscribed with the words, Still the bravest bastard I know. — a variation on something the boys' coach used to say to Benji. A watch, presumably the one a very young Benji once stole from his coach, rests beside the puck.

HBO Nordic's Beartown premieres in the United States on Feb. 22.

More like this
Netflix Shut Down 'Bridgerton' S3 Rumours About A “Very Dark” Storyline
By Bustle
Bill & Frank’s 'The Last Of Us' Episode Has Twitter Emotionally Wrecked
By Alyssa Lapid
Melanie Lynskey Plays A “Ruthless Leader” In 'The Last Of Us'
By Brad Witter
Linda Ronstadt’s “Long Long Time” Plays A Pivotal Role In The Last Of Us
By Brad Witter
Get Even More From Bustle — Sign Up For The Newsletter
From hair trends to relationship advice, our daily newsletter has everything you need to sound like a person who’s on TikTok, even if you aren’t.