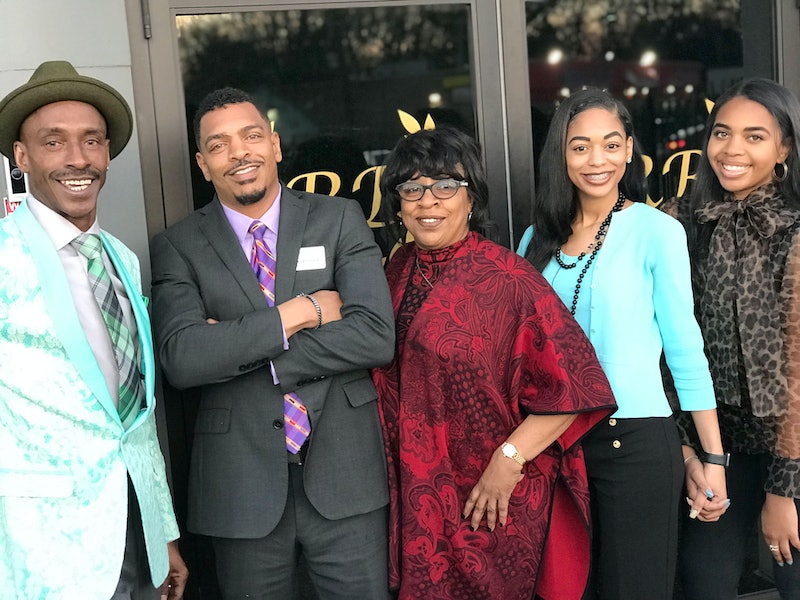 One of Netflix's latest offerings may prove to be anything but dead on arrival. Buried By the Bernards, which lands on the streaming network Friday, Feb. 12, introduces the Bernard family and a comedic look inside their R. Bernard Funeral Services home. Netflix describes the business as "unorthodox," and from the looks of the official trailer, the Memphis, Tennessee family could be characterized just the same.

Buried By the Bernards appears as a follow-up to the family's popularity stemming from a 2017 appearance on the Steve Harvey Show and for their headline-making drive-thru window viewings. A viral commercial in which a dead body rises from a coffin to complain about his own funeral costs further cemented the Bernards' eventual celebrity status. Memphis-based television station WATN reported that the national recognition gained from these events "caught the attention of a producer," and thus Buried By the Bernards was born.

The Bernard family patriarch, Ryan Bernard, previously told WATN, "We didn't want any type of part of that. They [producers] just told us, 'Hey, we're going to make this into a comedy — your uncle Kevin and your mom. This is going to be a comedy, and we're going to focus it on the family and not the business.'" He continued, "We thought that was a great idea, so we just went with it because this is us every day."

Here's everything you need to know about Buried By the Bernards and the entrepreneurial family before they become your new Netflix favorites:

What is Buried By the Bernards about?

Buried By the Bernards features Ryan Bernard, owner of R Bernard Funeral Services, and his eclectic family as they help families grieve while operating their affordable funeral business. Season 1 of the new series includes eight episodes, and production for the show "nearly wrapped its entirety" before the COVID-19 pandemic gripped the United States in 2020.

In the WATN interview, Ryan said, "I have a whole new outlook on real actors and actresses, having to be on set at certain times of the day. It was like a second job — it was a second job. Wardrobe changes, doing makeup. Stuff like that, I'm not used to."

Who else is in the Bernard family?

Aside from Ryan, the show also stars his hilarious mother, Debbie Bernard, his two daughters, Deja and Raegan, and his uncle Kevin Miller. Fans of the Bernards' viral commercial may remember Kevin as the body in the coffin brought back to life.

Judging by the trailer, Kevin and Debbie could be the breakout stars of Buried By the Bernards. In it, Ryan likens his mother to a dictator, so you can expect her strong personality to be a focal point. But in her defense, Debbie declares, "I'm your mama. I'm the boss. After I die, I'm still the boss."

Will there be a Season 2?

As novel as this show may seem, a reality series about family-operated funeral businesses, such as Family Plots, The Casketeers, Funeral Boss, and Best Funeral Ever, is hardly a new concept. However, the latter two shows centered around Black families and signifies a pattern Decider took notice of in 2017: "Black-owned funeral homes where dying is viewed not as bleak but as a heavenly homecoming."

Best Funeral Ever lasted just one season, and only six episodes of Funeral Boss have aired since its premiere in 2013. It's too soon to know if Netflix will order a second season of Buried By the Bernards, but if the trailer is any indication, viewers are in for an enjoyable and offbeat take on families and funerals.