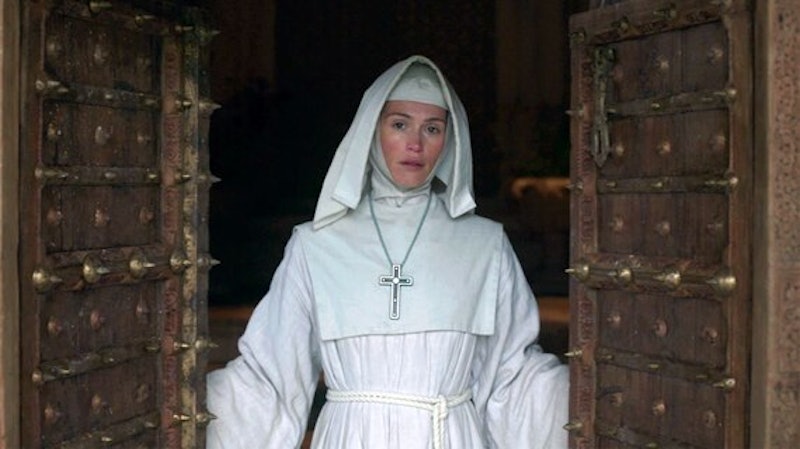 Dubbed a "bizarre and exquisite little novel" by The New York Times upon its release in 1939, Rumer Godden's Black Narcissus tells the story of Anglo-Catholic nuns who travel across India to establish a mission — the Convent of St. Faith — in the Himalayas. Godden's novel was last adapted into the 1947 film of the same name, and now Black Narcissus will return to a screen near you as a miniseries from FX and the BBC. For those looking for a refresher on the book, read on for a breakdown of Black Narcissus' book ending. Major spoilers for Black Narcissus ahead.

Black Narcissus opens with a group of nuns from the Order of the Servants of Mary traveling across British India from Darjeeling to the fictional Mopu Palace, where General Toda Rai has offered them the room they need to establish a convent, school, and hospital. One brotherhood of missionary workers has already failed to set up shop at Mopu before the sisters arrive, and Mr. Dean, the Englishman responsible for bringing them provisions, bets that the nuns will depart the Himalayas within a year.

Seemingly true to Mr. Dean's prediction, the small contingent of nuns struggle to adapt to their new lives. Their leader, Sister Clodagh, is a young sister superior whose only source of guidance comes in the form of letters from the priest and Reverend Mother in charge of her order. The wildness of the Himalayas tests Sister Phillippa, who leaves the Convent of St. Faith when she finds that the landscape distracts her from her duties.

As Sister Clodagh wrestles with what might have been, had she married her old flame instead of entering the sisterhood, Sister Ruth grows increasingly infatuated with Mr. Dean, much to his chagrin. Resentful of Sister Clodagh's authority and what she perceives to be Mr. Dean's affections for the sister superior, Sister Ruth makes one final attempt at seducing the Englishman, leaving the convent in secret. After Mr. Dean spurns her, Sister Ruth returns home in a fugue state.

Back at the convent, the nuns have been searching for Sister Ruth, but to no avail. As morning dawns, Sister Clodagh goes outside to ring the Angelus bell. On the slick precipice of Mopu Palace, Sister Ruth attacks the sister superior in a rage. In the scuffle, the attacker loses her footing and falls onto the cut stakes of bamboo below. She dies before anyone can come to her aid.

As Mr. Dean predicted upon their arrival, the nuns leave Mopu just as the rainy season rolls in. Although Sister Adela, who came to Mopu to replace Sister Phillippa, insists on treating the convent's failure as a learning experience, Sister Clodagh cannot help but focus on her personal failures — to Sister Ruth, both in her service to God and in her death, as the local residents have made a shrine of her grave to appease what they see as a restless, vengeful spirit; to the local residents, for taking their school and hospital away from them; and to Kanchi, her Indian student, who is destined never to marry her lover, but to live as his concubine.

The last time Sister Clodagh sees Mr. Dean is when she asks him to care for Sister Ruth's grave, just before the nuns depart for Darjeeling again. From Godden's novel:

"He looked away from her and down at his hat, the old Feltie she knew so well. 'I'll try,' he said, and it was then he added: 'But it's best for you to go and try not to remember it. No one can stop them doing their poojah to the grave. I'll try all the same.' Then he said again: 'Good-bye, Sister Clodagh,' and went out to his pony.

"That was the last sight she had of him, as he rode away sitting loosely in his saddle, his legs dangling, his shirt tails and his hat brim flapping against the summer sky, and Phuba running beside him at a steady jog trot, his pig-tail slapping his thighs as he ran."

Black Narcissus miniseries premieres Nov. 23 on FX. Written by Life in Squares screenwriter Amanda Coe and directed by A Quiet Place cinematographer Charlotte Bruus Christensen, the new adaptation stars Gemma Arterton (Vita and Virginia) as Sister Clodagh, Aisling Franciosi (The Nightingale) as Sister Ruth, and Alessandro Nivola (American Hustle) as Mr. Dean. The Reverend Mother Dorothea will be portrayed by the late Game of Thrones and Avengers star Diana Rigg, in one of her final performances.