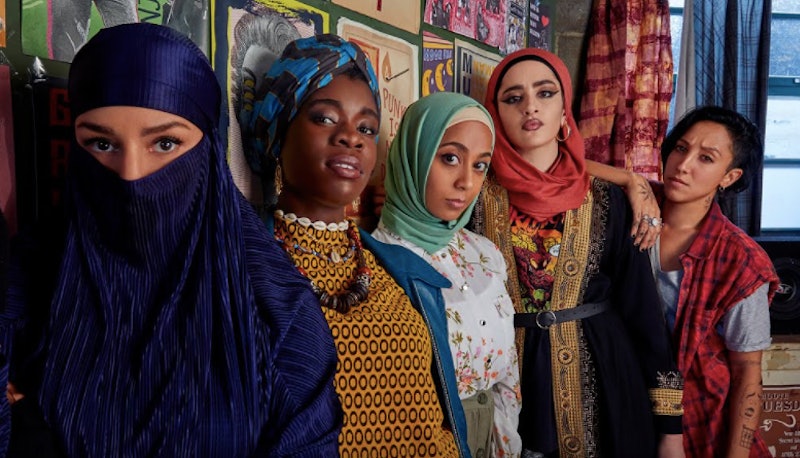 First came Chewing Gum, then Derry Girls, and now we have We Are Lady Parts. Never one to shy away from us strong female leads, Channel 4’s latest offering promises a fresh perspective on life as a creative, ambitious young Muslim women. Written and directed by Nida Manzoor (Doctor Who, Enterprice, Hounslow Diaries), the new musical comedy follows a Muslim female punk band called Lady Parts and explores sisterhood, belonging, and finding your voice. Although the series will air as a Peacock original in the U.S., it was first commissioned by Channel 4 in 2019 after a pilot episode was released. So, here’s everything you need to know about We Are Lady Parts.

What Is The Plot Of We Are Lady Parts?

The six-part comedy draws from Manzoor’s own experiences of cultural collectives and artists. An unapologetically bold comedy, We Are Lady Parts follows the band as they recruit their lead guitarist and try to get their first proper gig. Featuring original punk songs and surprising cover tracks written and adapted by Manzoor and her siblings, the series celebrates the richness and diversity of contemporary London. As described by Channel 4, the comedy is ultimately “about funny women with real agency, forging their own lives and identities in a world determined to do it for them.”

Who Is In The We Are Lady Parts Cast?

Is There A Trailer For We Are Lady Parts?

Channel 4 and Peacock released the trailer earlier this month, generating a lot of excitement on social media.

Described as “a confused mix of hash anthems and sound girl power,” in the opening of the trailer, Lady Parts are a visibly Muslim group, sporting different hijab styles whilst rocking out on stage in true punk fashion. And the actors actually play their instruments themselves, adding to the authenticity of their characters’ portrayals.

Despite it being only 50 seconds long, the trailer give us a glimpse of the hilarity to come.

When Will We Are Lady Parts Premiere On Channel 4?

The series is set to be released this spring, but no official premiere date has been announced yet. Bustle has reached out to Channel 4 to find out more details and I’ll be sure to let you know as soon as we hear anything.

More like this
Everything To Know About The 'Daisy Jones & The Six' TV Series
By Maxine Harrison and Brad Witter
'Consent' Is Not Just One Person’s Story, But Hundreds
By Shahed Ezaydi
Wait, Is 'Happy Valley' Not Actually Over?
By Darshita Goyal
Twitter Simply Couldn’t Cope With The ‘Happy Valley’ Finale
By Sophie McEvoy
Get The Very Best Of Bustle/UK
Sign up for Bustle UK's twice-weekly newsletter, featuring the latest must-watch TV, moving personal stories, and expert advice on the hottest viral buys.