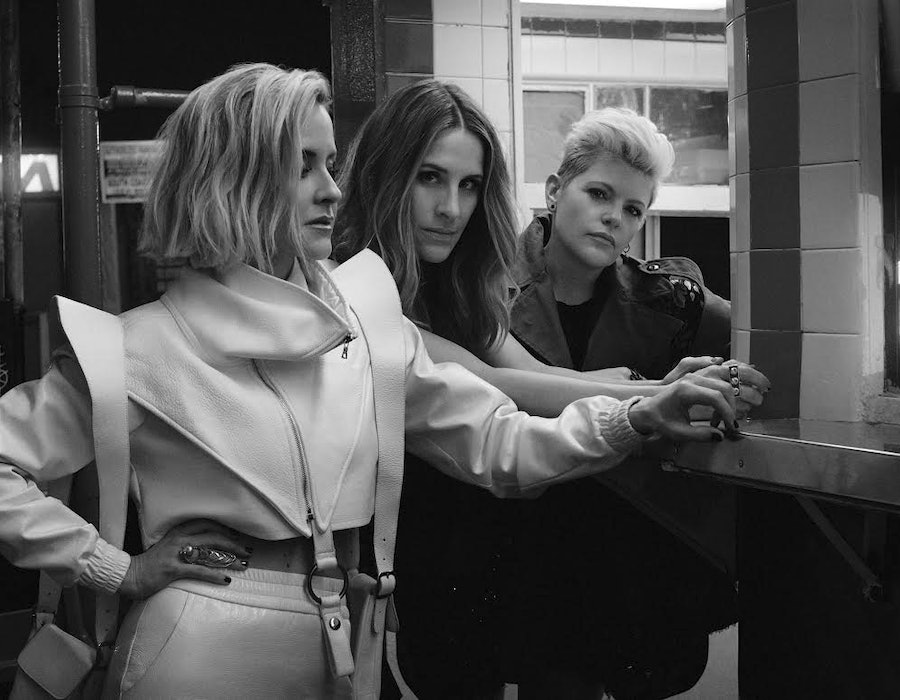 The artists formerly known as the Dixie Chicks have wanted to change their name for a long time. “We wanted to distance ourselves from ‘Dixie’ since the [Bush] controversy,” The Chicks lead vocalist Natalie Maines tells Bustle. Though early aughts fans took more issue with the use of “chick” than “dixie,” the band members weren’t immune to the latter’s association with slavery and the Confederacy. “It started feeling gross back then and we tried to start using ‘DCX’ or ‘The Chicks,’” Maines explains. But with all the clout the band had already built up, the abbreviated monikers didn’t catch on. In the years since, the band members continued to ask themselves if people would even care about a name change anymore. But the decision became an easy one this June. As the country became enveloped in a racial justice reckoning following the death of George Floyd, and Confederate monuments were toppled across the South, NASCAR’s official banning of the Confederate flag was the moment the band knew it was time to change their name for good.

Now, The Chicks — singer Natalie Maines, banjo player Emily Strayer (née Robison), and fiddle player Martie Maguire — are reintroducing themselves to fans with their first new album in 14 years, Gaslighter. And despite the name, as well as a scathing Trump-themed lyric video, the album isn’t a jab directly targeted at the president. Still, that didn’t stop the internet from speculating about the album title’s meaning following the release of its biting title track in March. Do a little bit of digital digging, though, and lines like, “Boy, you know exactly what you did on my boat,” quickly make clear that the track is about Maines’ turbulent divorce from her ex-husband, who owned a boat called the Nautalee. But regardless of who the track is about, its lyrics prove that though The Chicks’ name has changed, they still aren’t ready to make nice.

Since the 1998 release of their major-label debut Wide Open Spaces, The Chicks have masterfully toed the line between country and pop, embodying a feminist presence that was the antithesis of the beer-guzzling, pickup truck narratives considered staples on country music radio stations. Instead, The Chicks modeled themselves after pioneering country stars like Dolly Parton, Loretta Lynn and Shania Twain; played Lilith Fair, and recorded defiant songs like 1999’s “Goodbye Earl,” which detailed vengeance on a fictional abusive husband and sparked anger from men. (Never mind that men have made murder ballads for years sans criticism.) The Chicks, now emblems of a rebellious sisterhood, would go on to win a slew of Grammys and headline arenas. Then that infamous incident from 2003 happened: Prior to America’s invasion of Iraq, Maines told a London audience she was "ashamed the president of the United States is from Texas." Backlash immediately followed in the press and on the charts, where their No. 1 single “Travelin’ Soldier” trickled off the Top 50 after being removed from radio playlists as the industry turned their back on the band.

“Nobody would play that song,” bandmate Martie Maguire says of “Travelin’ Soldier.” “Everybody was saying that we didn't support the troops and that was a huge head-scratcher, ‘cause we were like, ‘Well, wait a minute. We're the ones that are actually worried about them being in harm's way.’” Following what they refer to simply as ‘the controversy,” the band released one more album, 2006’s critically acclaimed Taking the Long Way. Then they largely disappeared from the spotlight.

But now The Chicks have returned with Gaslighter, their eighth studio album. With their emotionally revealing Jack Antonoff-produced record, the band has not only stuck to its country roots, but delivered on raw balladry and pop-leaning anthems. The album, which is more melancholy than it is uptempo, very much speaks for itself, in part because the trio can’t really talk about the personal aspects of it. (Maines’ ex attempted to bar the music from being released because he was concerned about it violating a confidentiality clause in their prenup.) But that didn’t stop The Chicks from telling their story the way they intended, unafraid to bruise any fragile male egos in the process. While Maines’ divorce was finalized in December, The Chicks have remained tight-lipped on any specific references on the record. Yet clearly woven throughout the tracks are allusions to divorce, family, infidelity and heartbreak. “Five divorces between the three of us,” Strayer says. “It's a subject matter we're all very well versed in.”

On songs like “Sleep At Night” (“My husband’s girlfriend’s husband just called me up / How messed up is that / It’s so insane that I have to laugh”) and political anthem “March March,” Maines lets out an exhilarating roar. The latter was inspired by the trio attending the March For Our Lives protest in 2018. “It was after the school shootings, and we went to D.C. with our families and marched,” Strayer recalls. “That was the first time I'd ever done that, and it was life-changing.” While “Travelin’ Soldier” was once merely misconstrued as taking political aim at Bush instead of paying tribute to the military, “March March” is a direct hit at the Trump administration and the failure to protect our citizens.

While The Chicks are releasing Gaslighter in a different era than their previous work, country music still has a long way to go in working to better represent and champion women. Only 10% of songs on country radio are recorded by women, and most of them aren’t played during peak listening hours. Discovering new female artists on the air isn’t easy, considering radio remains cutthroat: There are even hidden rules stations have about playing two songs by women back-to-back. The lack of female representation in radio reinforces the narrative that women are meant to compete and that there’s only room for one female artist. “The fact that country radio doesn't embrace female artists to the degree that they need to right now is so sad, especially since I feel like country female artists are doing [the more] interesting work right now,” Strayer says. “All the guy songs sound the same to me.”

“Five divorces between the three of us,” Strayer says. “It's a subject matter we're all very well versed in.”

In addition to the misogyny on country radio, The Chicks believe the genre is also overdue for a reckoning with its inherent racism. The “yeehaw agenda,” which raises awareness of Black country music and culture, has been around for decades, finally hit its peak last year courtesy of Lil Nas X and Beyoncé. But despite the blockbuster success of Lil Nas X’s “Old Town Road,” it was removed from Billboard’s Hot Country chart for “not embrac[ing] enough elements of today’s country music to chart in its current version,” according to the outlet. Strayer also recalls the criticism Beyoncé received after performing her country-infused Lemonade track “Daddy Lessons” with them at the 2016 Country Music Awards from viewers who questioned whether or not the song was “country” and spewed racism. (Beyoncé would later release a remix of “Daddy Lessons” with The Chicks.) “When we played the CMA Awards, some of the things that people were saying on the chat board about Beyoncé, it made my stomach turn,” Strayer says. “I just can't believe we still live in a country that breeds that type of thinking.”

Though the band never wants to come across as preachy, they plan to spread their gospel for the long haul. And finally, The Chicks are in good company: More women in country music have been sharing their political opinions and revolting, with everyone from Mickey Guyton and Kacey Musgraves to Maren Morris and the Highwomen tackling more complex women’s storytelling while confronting racism and homophobia. “Music used to be this place for fun, but it is also a great art form for being political, being opinionated, having a point of view,” Maines says. Thanks to The Chicks, that is.

More like this
Britney Spears Is About To Make Her Music Comeback With Elton John
By Jake Viswanath
Bridgerton’s Simone Ashley Stars In ODESZA's "Love Letter” Music Video
By Radhika Menon
5 Times Blue Ivy Has Been Featured In A Beyoncé Song Or Music Video
By Radhika Menon
An Ultimate Guide To The Music Of 'Rap Sh!t'
By Brad Witter
Get Even More From Bustle — Sign Up For The Newsletter