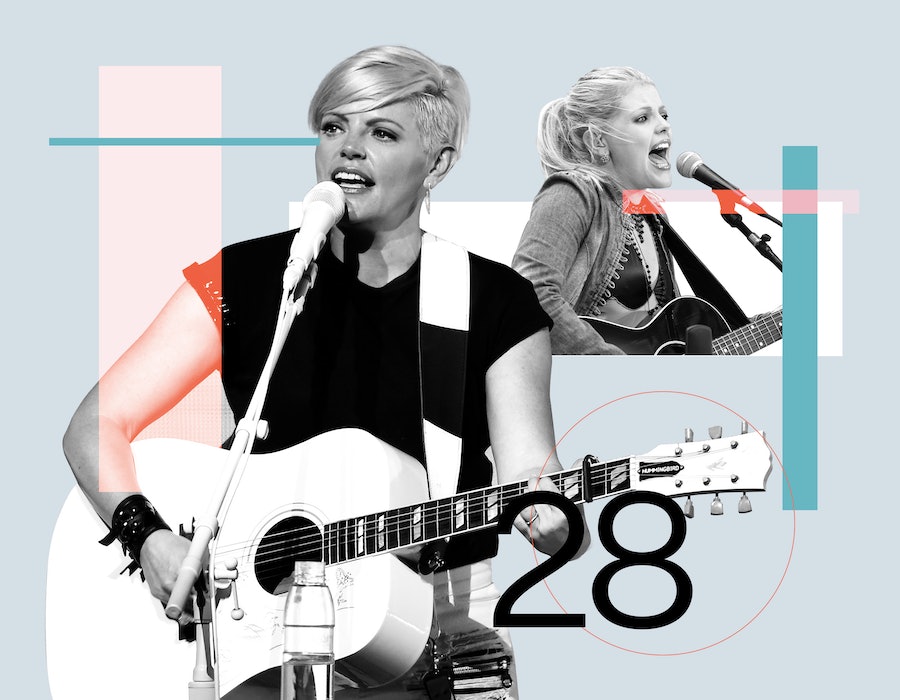 In Bustle’s Q&A series 28, successful women describe exactly what their lives looked like when they were 28 — what they wore, where they worked, what stressed them out most, and what, if anything, they would do differently. This time, The Chicks’ Natalie Maines reflects on the year of what she calls “the controversy.”

Natalie Maines was recently watching Taylor Swift’s Netflix documentary Miss Americana when she saw Swift’s team advise her to stay silent about the midterm elections. “I was shocked at how many people were telling her not to [speak out],” Maines, 45, tells Bustle. “I would have never had a boardroom of people [telling me] if it's OK for me to do something. I would give them the finger.” But Maines’ freewheeling, no f*cks attitude is exactly why Swift — who was warned “Don’t be like the Dixie Chicks” — was afraid to raise her voice in the first place.

In March 2003, when Maines was on the cusp of 28, she told concert goers at the Shepherd's Bush Empire theatre in London that she and The Chicks (then known as the Dixie Chicks) were against the Iraq War and were "ashamed" President Bush "was from Texas." A week later, America invaded Iraq and they began receiving death threats, people burned their albums, and the band was “canceled” long before Twitter was around for #TheDixieChicksAreOverParty to trend. But what upset them most was how quickly the country music industry — which exiled them from radio stations dedicated to the genre — turned its back on the band. So much so that The Chicks still don’t feel like they’re part of the country community.

The “controversy," as Maines refers to it, has dogged them for nearly two decades and has served as a cautionary tale for rising country stars ever since. But now The Chicks are back with their first new album in 14 years, Gaslighter, in the midst of our nation’s reckoning with institutionalized racism. “We never thought about it in those terms but it's very interesting to hear Maren Morris or Kacey Musgraves or other women in music saying that we paved the way for them to feel confident that they could speak out and have a point of view and voice it,” she says. “And I think it’s extra great that [Taylor Swift] is getting political now because it doesn't come naturally for her to tell people, ‘F*ck you, I'm not going to run it by the board.’”

Below, Maines reflects on the Top of the World tour, posing naked, and her only regret from 2003.

We started the year by singing the national anthem at the Super Bowl. We were America’s sweethearts. We were so patriotic. Then just a few weeks later, the controversy happened. The first month was an emotional whirlwind. I wanted to bury my head in the sand. I wanted to stay in Europe forever but [my bandmate] Emily's personality was more like, “We gotta get back to the States and fix this.”

Then we went on the Top of The World tour, which was ironic. Because we were not on top of the world. But it was one of my favorite tours of my career. We stayed very insulated and had people around us protecting us and sheltering us so that we could do our job and not get overly stressed out or worried. And we already had the craziest, loudest, Taylor Swift-volume fans but on that tour, it was just three times louder. I felt more connected to them than I'd ever felt before.

What else was going on in your personal life that year?

I had to move. That was one thing from the controversy, I didn’t feel safe living in the center of Austin anymore because people knew where I lived. So I moved 40 minutes outside of Austin. And I got pregnant when I was 28 as well. My son was born in July of '04.

2003 was also the year that you and your bandmates posed naked for the cover of Entertainment Weekly.

People were going on TV calling us “Dixie Sluts.” Disgusting. So we loved that photo shoot [where we painted those insults on our bodies] and we were all about it. [Our publicist] Cindi Berger tried her best to talk us out of it. She was like, “Paint different words! Not Dixie sluts!” We were like, “This is what they're calling us Cindi! We're just telling the truth!” She really thought it was going to be the voice that never ends.

Is there anything you would tell yourself to do differently then?

I would tell my 28-year-old self, “Make no apologies.” I did a half-*ss apology on Diane Sawyer. I would tell myself, “Don't do that. Do not cry on Diane Sawyer. Wait another week before you do this interview because you're too raw.” I saw [the clip] in our documentary [Shut Up & Sing] and I remember feeling surprised at what a baby I looked like. I was watching myself on TV, just thinking, ”Oh, you poor girl, you have no idea what is about to happen.”

Would your 28-year-old self ever believe we’d live in a time where celebrities are free to speak out?

I have thought about what would have unfolded with us in this day and age. I think I would have just been able to tell everyone to f*ck off and get on with more important things. Now you don't have to go on Diane Sawyer to tell the world [what you want to say], you can just do it in a tweet or Instagram post or whatever.

"I remember feeling surprised at what a baby I looked like. I was watching myself on TV, just thinking, 'Oh, you poor girl, you have no idea what is about to happen.'"

We were at the Academy of Country Music Awards via satellite remote and Toby Keith had just started putting up an image of Saddam Hussein's head on my husband's [with me] on the big screen behind him at his concerts. The hate was disgusting. So we thought it would be a really funny inside joke to have the girl who did our clothes on tour make an “FUTK” shirt for me to wear during the show that night. But everyone knew exactly what it meant and they started bringing FUTK signs or making their own shirts.

Has there been a moment in your career where you felt like you made it?

The week that we had with Beyoncé preparing for our CMA performance. To witness that kind of superstardom was like watching the greatest documentary for a solid week. Everything was so different. We have a dressing room that has like shitty pipes and drapes. Meanwhile she's got a warehouse [for a dressing room] that’s designed beautifully. Then she walks in and is a down-to-earth Texas girl, just like we are. There's nothing diva-ish about her personality, but her world is the most diva thing I'd ever seen. It was awesome.

More like this
At 28, Sharon Horgan Was Hoping To See Damon Albarn At The Pub
By Samantha Rollins
Everything To Know About Taylor Swift’s 10th Studio Album, 'Midnights'
By Grace Wehniainen and Jake Viswanath
Lizzo Twerks While Playing James Madison's 200-Year-Old Crystal Flute Onstage
By Radhika Menon
Twitter Is Freaking Out Over Rihanna’s 2023 Super Bowl Halftime Show Announcement
By Stephanie Topacio Long
Get Even More From Bustle — Sign Up For The Newsletter