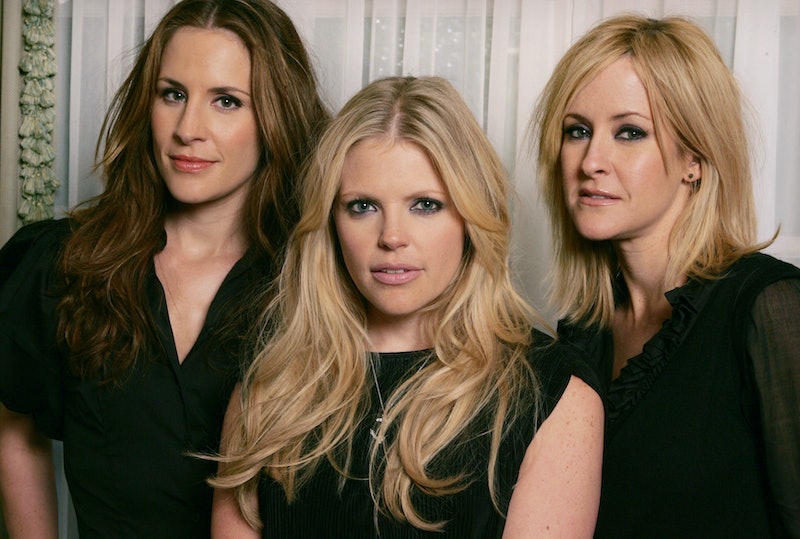 Sometimes, in order to make real social progress, you have to make some unexpected changes. The Dixie Chicks have announced they're changing their name: the country band will now go simply by The Chicks. While no official explanation has been given, the move comes in the wake of Black Lives Matter protests against police brutality around the world, which has inspired the entertainment world at large to reassess how they've perpetuated systemic racism.

The Chicks got their original name from an album and song they were inspired by, Dixie Chicken by Little Feet. But the word "Dixie" comes from the Mason-Dixon Line, which separated slave-owning Southern states from free states in the North before the Civil War. Although "Dixie" is used as a slang term to describe modern Southern states, it's also still often associated with slavery, prompting calls from some fans for the band to change their name.

The band's YouTube and social media accounts, as well as their official website, have all been updated to the new moniker. As pointed out by BuzzFeed, the cover art for their highly anticipated comeback album Gaslighter was also edited to reflect their new name. The Chicks have not publicly commented on the news, but their website does share one strong statement: "We want to meet this moment."

To mark the occasion, The Chicks released a new song, "March March," a menacing, slow-burning political anthem inspired by protests for much-needed social change. The accompanying lyric video splices together footage from the March For Our Lives, the Woman's March, and Black Lives Matter protests, concluding with the names of George Floyd, Breonna Taylor, and numerous other victims of police brutality displayed onscreen.

The Chicks' decision to ditch "Dixie" follows fellow country band Lady Antebellum, who changed their name to Lady A earlier this month. They got rid of the word "Antebellum" due to its connection to the pre-Civil War era, often called the "golden age of slavery," which the band said they had not considered when choosing a name. "When we set out together almost 14 years ago, we named our band after the Southern 'Antebellum' style home where we took our first photos," the band wrote. "We are regretful and embarrassed to say that we did not take into account the associations that weigh down this word referring to the period of history before the Civil War, which includes slavery."

Hopefully the decision made by Lady A and The Chicks set an example for artists everywhere and make it clear that the music world must be considerate and inclusive to all.