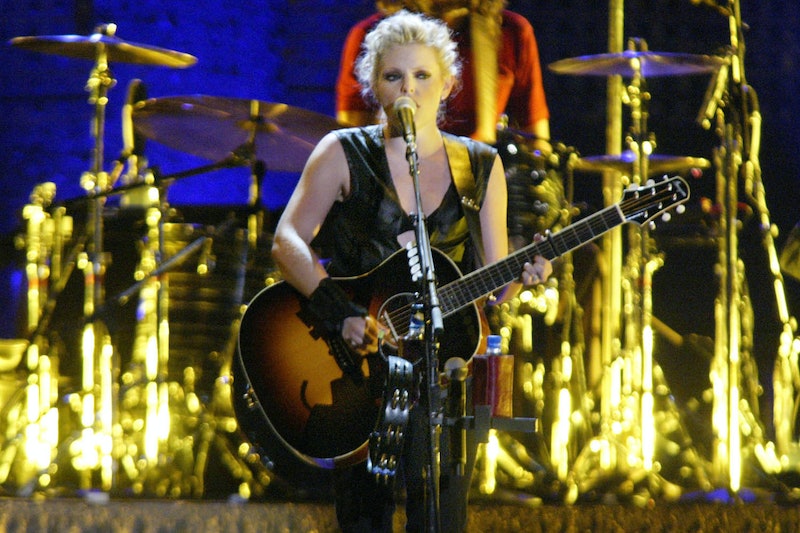 Not only are The Chicks back with a new name, the iconic country group returned with their explosive new album, Gaslighter, a collection of raw, intimate break-up anthems. One song in particular piqued fans' interest when lead singer Natalie Maines menacingly sang about the "Tights On My Boat," apparently left by another woman. Sadly, for fans wondering who those tights belonged to, the answer might be disappointing. The Chicks' Natalie Maines revealed the "tights" on her boat don't exist in a new interview with Howard Stern on Monday, July 20, as reported by Billboard.

During Maines' appearance on his SiriusXM show, Stern got right down to business and asked if Gaslighter was written about Maines' divorce from ex-husband Adrian Pasdar. (The two were divorced in 2017 after 17 years of marriage, and share two children.) "Everyone is drawing from their own lives when they're contributing lyrics, but, yes, I was definitely the one going through it at the time," she said, noting that there were many co-writers that contributed to the album, including Teddy Geiger, Justin Tranter, Julia Michaels, and producer Jack Antonoff. When he finally mentioned what we all want to know about, a.k.a. the tights, Maines simply laughed and confirmed that the incident in question never actually happened. "I hate to disappoint, but that's not true, that's just fun," she said.

Although the tights may not be real, the song apparently does have some truth to it. When Stern's co-host Robin Quivers asked Maines how she made the tale up, she clarified one aspect of the story. "I didn't say there wasn't a boat involved, I'm saying there weren't tights," she retorted. Maines added that she signed an NDA that prevents her from speaking about her divorce, so legally, she can't confirm there was a boat, nor can she talk about any real specific inspiration of the album. "It's just not true that it's all about me, but I was the one going through it... I wonder if they'll play this conversation in court?," she wondered aloud.

Proving her point, Maines did cop to having one strong inspiration in the studio: Miley Cyrus. When talking about how she worked with producer Antonoff, Maines admitted that she often liked to "steal" from the "Can't Be Tamed" singer's groovy beats. "So I always have things I like, I usually steal from Miley Cyrus... just her beats, like not her melody," she clarified. This isn't the first time she's been influenced by Cyrus, as The Chicks also covered her smash hit "Wrecking Ball" back in 2014. Perhaps it's time for them to finally collaborate on a country anthem?