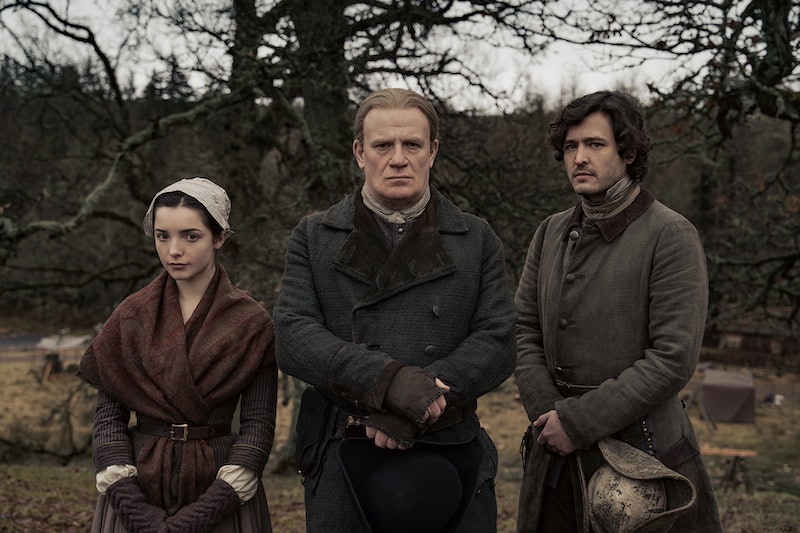 Some new characters are coming to Fraser’s Ridge in Outlander Season 6: the Christie family, comprised of patriarch Tom and his kids Malva and Allan. Tom shares a past with Jamie (Sam Heughan) — they were both imprisoned at Ardsmuir, which was shown in Season 3 — and heads to Fraser’s Ridge with his children after hearing the popular rumor that Jamie has offered to help former Ardsmuir prisoners settle down. But it’s not long before Tom and his family start causing trouble for Jamie, Claire (Caitriona Balfe), Brianna (Sophie Skelton), and Roger (Richard Rankin).

“It's a really interesting dynamic to bring a whole new family into the family and see how that goes,” Skelton told Entertainment Tonight. “The Frasers themselves seem to be more of a unit this season. There's no kind of inner quarrels, [so] it's now them dealing with other people coming in and unsettling from within.”

Here’s everything to know about the newcomers.

Who is Thomas Christie?

Played by Welsh actor Mark Lewis Jones (The Third Day, Carnival Row), Tom is a very devout and fundamentalist Protestant, which immediately puts him at odds with the Catholic Jamie and 1960s time-traveler Claire. “He feels he's so righteous and right about everything that he's doing, and he has God at his back. And Jamie has trouble dealing with that too, because he knows that Tom's coming to from a good place, he's just not always doing the right thing,” executive producer Matthew B. Roberts told ET. “That's what gave him trouble at Ardsmuir, and I think that Jamie's hoping against hope that Tom has changed over the years.”

He hasn’t. Tom wields his conservatism like a cudgel, and his differing views from Jamie and Claire throw the leadership of the town into question. His arrival “really signals the beginning of this sort of unraveling of the Frasers' popularity at the Ridge, and also the status quo,” Heughan added. “The Christie family as a whole are not the neighbor you really want. Jamie is quite forward-thinking, quite a modern man, but I think there are people that obviously would have their feet stuck in the past and would follow Tom Christie and his teachings.”

Who is Malva Christie?

Malva Christie is played by Jessica Reynolds, a relative newcomer whose past credits include The Curse of Audrey Earnshaw and My Left Nut. At the start, Malva is in awe of the progressive Claire, and she becomes Claire’s second surgery assistant at the clinic — causing some rivalry with Marsali (Lauren Lyle). But fans of Diana Gabaldon’s books know that Malva is at the center of a very dramatic plot line involving Jamie and Claire that’s likely going to take up a good chunk of Season 6.

“Malva is this very curious, intense character and Claire is in some ways really taken by her,” Balfe explained to Den of Geek. “Claire can see that hunger, desire and eagerness to expand her mind and expand her knowledge. She knows that she’s under a very oppressive father and a very oppressive brother. Claire really feels for her and wants to take her under her wing, which of course may or may not cause her some pain further down the line.”

Who is Allan Christie?

Finally, Tom’s son Allan is portrayed by Alexander Vlahos, who played Mordred on Merlin and Monsieur Philippe d'Orléans on Versailles. “Those of you who have read the books know that Allan has a very dark history,” Vlahos said in an Starz video preview of his character. “But he’s also trying to find his way in the world. He’s come over to Fraser’s Ridge to try to take a claim of a little bit of his own manhood, trying to emulate his father, trying to follow in his father’s footsteps.”

More like this
'Stranger Things' Season 5 Will Echo Season 1 In A Key Way, The Duffer Brothers Confirm
By Kadin Burnett and Sophie McEvoy
‘Squid Game’ Creator Hwang Dong-Hyuk Just Dropped A Major Season 2 Tease
By Brian Anthony Hernandez and Bustle Editors
Everything To Know About 'Westworld' Season 5
By Sophia Moore
What's New On Netflix: A Third '365 Days' Movie & Lili Reinhart’s New Film
By Arya Roshanian
Get Even More From Bustle — Sign Up For The Newsletter