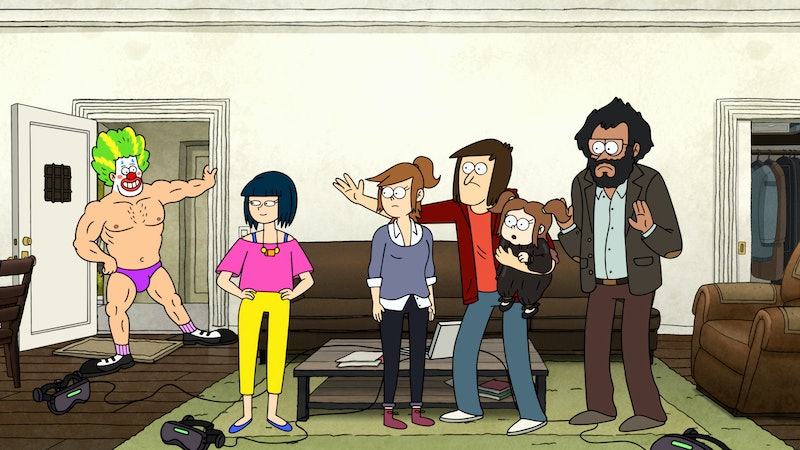 The first teaser for Regular Show creator JG Quintel's adult animated comedy Close Enough debuted in 2017, when the series was slated to air on TBS. Three long years later, the show will finally premiere on HBO Max, and the Close Enough voice cast has the star power to make the wait worthwhile. In addition to Quintel adding his own voice into the mix, two Orange is the New Black alumni also get in on the animated action.

The "surreal animated comedy" centers on a married couple, their five-year-old daughter, and their two divorced best friends/roommates all living together on the East Side of Los Angeles. As the characters navigate "that transitional time in your 30s when life is about growing up, but not growing old," they juggle work, kids, and pursuing their dreams "while avoiding time-traveling snails, stripper clowns, and murderous mannequins," per the new streaming service.

Although time-traveling snails are an obvious work of fiction, Quintel based Close Enough on his own real-life experiences. "As we were wrapping up Regular Show in 2017, I was looking for new ideas," he told Animag. "The first show coincided with me having a job and being out of college, and Close Enough is about getting married, starting a family, trying to buy a house. It’s about transitioning from being just yourself and doing whatever you want to taking care of other people in your life." The building featured in the show even has the exact same floor plan as the first place he lived in LA.

Below, meet the actors and characters from his fictionalized reality.

HBO Max describes Emmy winner Quintel's character Josh as an "eager and optimistic" husband, father, and "future world-famous video game designer." Until he makes it big with games like Ladder World and Clap Like This, however, the patriarch with a "golden retriever-like attitude" is stuck in his "soul-deadening day job" at the TV-installation company Plugger-Inners.

Best known as the lead in 2014's Paranormal Activity: The Marked Ones and her roles on The Flash, Shameless, 9-1-1, and The Vampire Diaries, Walsh voices Josh's logical, organized wife Emily. An assistant at processed-food conglomerate FoodCorp, Emily is a "strong working woman," who performs comedy-rock songs with her friend Bridgette in her scarce free time.

As Josh and Emily’s 5-year-old daughter Candice, DiCicco, who's had voice roles in Nickelodeon's The Loud House and Cartoon Network’s Adventure Time, is the heart of the family. "She loves being with everyone in the apartment, and thinks kids who live with only their mom and dad and not also a whole other divorced couple are really missing out," per the network.

The actor who's appeared in such TV shows as The League, The Good Place, Modern Family, Parks and Recreation, and Brooklyn Nine-Nine, plays Josh’s neurotic high school best friend Alex. The community college professor with dreams of being a famous author lives in the walk-in closet of the apartment he shares with Josh, Emily, Candice, and his ex-wife Bridgette, and enjoys proving everyone wrong.

The Orange Is the New Black and Spider-Man: Into the Spider-Verse alum lends her voice to aspiring social media influencer Bridgette, who views work as more of a hobby to squeeze in between partying. Her comedy-rock act with Emily hasn’t hit the big time yet, but she’s still got #swaggerfordays, per HBO Max's character description.

Glenn's OITNB costar Danielle Brooks plays Pearle, a retired LAPD officer and the owner of the apartment building that houses Close Enough's central characters. "She has a cop’s fondness for gallows humor, chuckling at violent memories most people would find disturbing," per the streaming service. "Despite her grandmotherly demeanor, Pearle is ready to kick ass at a moment’s notice."

A Top 10 finalist from NBC’s Last Comic Standing, Adomian voices Pearle’s "adopted, shirtless son" Randy, who acts as the property manager and lives above the garage. He's not very handy, however, and "beats himself up over every minor mistake because he’s so eager to prove himself to Pearle."

With so much combined comedy experience, the Close Enough cast is sure to bring big laughs to HBO Max.