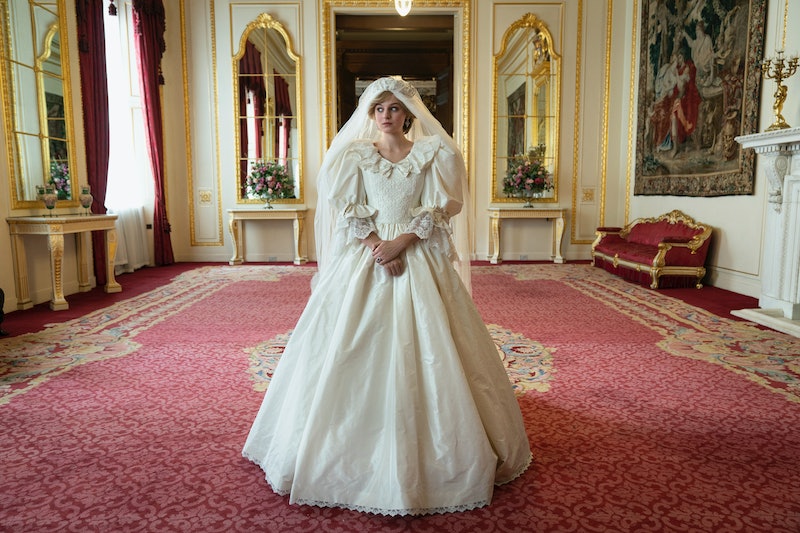 Princess Diana didn’t just become the People’s Princess when she married Prince Charles in 1981, she became a full blown fashion icon, too. That is one of the many reasons Emma Corrin was so excited to take on the role in the upcoming season of The Crown. But among all the classic looks of Princess Di's, there's the wedding dress, which Corrin has said was quite the experience.

Speaking to Radio Times, Corrin said recreating Princess Diana’s wedding dress for the screen was "mad", physically very heavy, but thoroughly enjoyable. "I loved the process of the fittings actually, weirdly, almost more than the wearing it on the day," she said.

Though the dress is only in the Netflix series for "a fraction of a moment", an incredible amount of effort went into its making. "I had so many fittings for it, I think about probably four or five, and each of one of those was several hours long,” she explained.

Princess Diana’s dress was designed and crafted by David and Elizabeth Emanuel in 1981. Though the dress itself is now kept as a "historical artefact", the Emanuels kindly shared the dress patterns with The Crown's costume designer Amy Roberts. According to the show’s Twitter account, Roberts wanted to “capture the same spirit and style” of the original “without creating a replica”.

“From the very moment of when they had the fake material and they were trying to measure me and get the shapes right, and then fitting it bit by bit – and it was all broken into different sections because it’s so chunky – it was incredible," said Corrin. "And I felt like I really got to know it very well because I spent so much time with it in fitting, and it was wonderful to be privy to that process."

To further add to the experience, Roberts suggested to Corrin that she should get her mum involved. “I was like, ‘I’m not actually getting married,’" said the actress, "but also completely knew what she meant and was like, ‘Yeah actually I really do want my mum here!'”

The fourth series of The Crown will air on Nov. 15.

More like this
Helena Bonham Carter Doesn't Think 'The Crown' “Should Carry On"
By Sam Ramsden
Kate Middleton Wore The Ultimate '90s Power Suit
By Sam Ramsden
'Love Island's Will Got A Farm Animal Manicure & It's *Adorable*
By Sam Ramsden
Armani Jackson Is Following In His Famous Actor Sister’s Footsteps
By Catharina Cheung
Get The Very Best Of Bustle/UK
Sign up for Bustle UK's twice-weekly newsletter, featuring the latest must-watch TV, moving personal stories, and expert advice on the hottest viral buys.