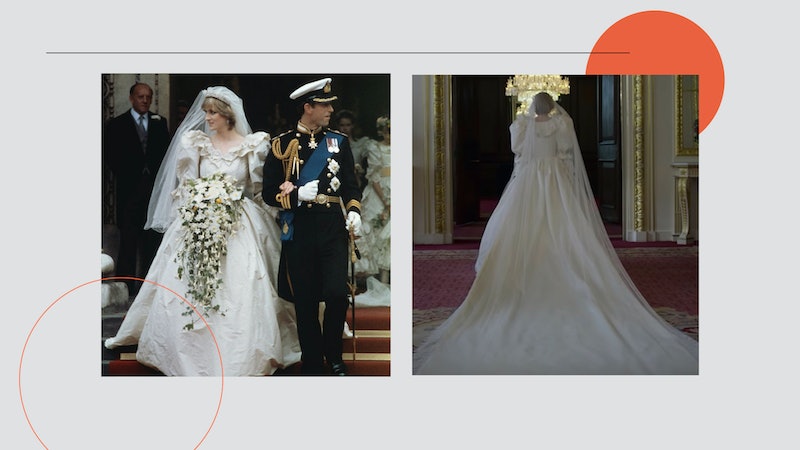 Netflix just released their first official trailer for “The Crown” Season 4 featuring Emma Corrin, who will play Princess Diana’s likeness. The season promises to feature Princess Diana largely, as it is set right around the time that she entered the Royal Family.

Fans are already anticipating the iconic outfits the show will recreate in the episodes to come. One particular look that has people talking? Princess Diana’s iconic wedding gown, which will be a major style moment on the show just like it was in real life.

Thanks to some photographers who frequented the set of the series while filming in London this past year, fans got a first glimpse at the looks that the late style icon wore that will soon be represented on screen.

Her sartorial legacy endures. Her looks are copied by fashion enthusiasts across the globe, including her daughter-in-laws Kate Middleton and Meghan Markle. And once Princess Diana's outfits and style hacks are introduced to a new generation of viewers on Netflix, her influence will only continue to grow.

Ahead, find 6 looks worn by Princess Diana and recreated for Corrin on The Crown.

More like this
Harry Styles’ Red Carpet Looks Have One Thing In Common
By El Hunt
Kaia Gerber’s Zara Collab Is This Autumn’s Minimal Chic Dream
By Darshita Goyal
How To Shop Your Favourite Celebrities’ Closets On Depop
By Darshita Goyal
Dr. Martens’ New Collab Reimagines A DM Classic
By Frances Stewart
Get Even More From Bustle — Sign Up For The Newsletter