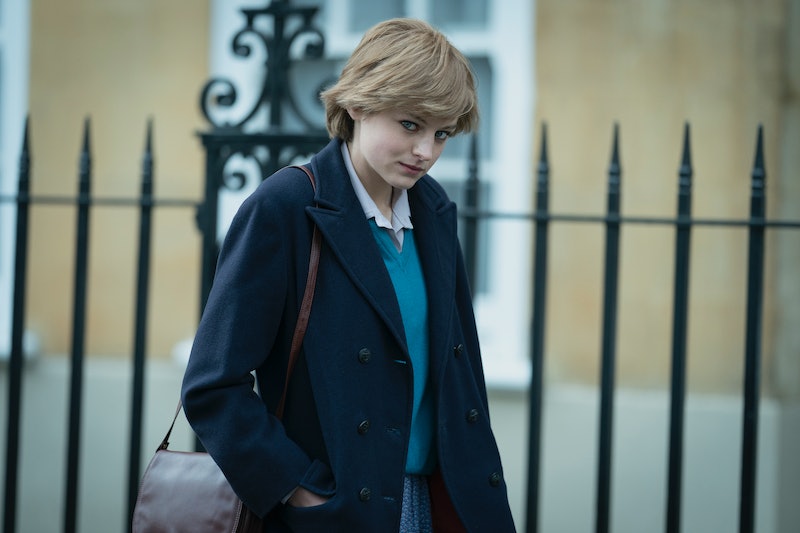 Fans were able to catch a glimpse of Emma Corrin donning Princess Diana's iconic wedding dress in The Crown Season 4 trailer, but the series intends to paint a much more intimate picture of the Princess of Wales' life and the various struggles she faced along the way. During an interview with The Sunday Times, Corrin revealed that The Crown will explore Princess Diana's mental health, particularly in regards to her battle with bulimia.

"I feel like I know her," Corrin told the outlet. "Drawing on my experience, not that I've experienced that kind of self-harm, but mental health in general, it can lead you down a very dark path when you're struggling to cope, when things feel out of control." The actor continued, saying she felt that the pressures of royal life and the spotlight became almost too much to bear for Diana — to the point where the Princess of Wales felt she needed to find an outlet for her growing anxiety.

"Diana very much doesn't have the love and comfort and attention she needs from the man she loves or the family, who aren't really acting as a family to her," Corrin explained. "There is a build-up of emotion she can't deal with, and making herself sick is a way of taking back control."

Back in 1995, Princess Diana addressed her eating disorder during a candid interview with BBC where she opened up about how her marriage (and subsequent divorce) to Prince Charles played a major role in diminishing her overall mental health. "I didn't like myself, I was ashamed because I couldn't cope with the pressures," she said at the time. "I had bulimia for a number of years, and that's like a secret disease...It's a repetitive pattern which is very destructive to yourself."

She added, "It was a symptom of what was going on in my marriage. I was crying out for help, but giving the wrong signals, and people were using my bulimia as a coat on a hanger: They decided that was the problem — Diana was unstable."

Bulimia and other mental health issues remain a somewhat taboo topic even today, despite the fact that "1.0% of young women and 0.1% of young men" meet the criteria for bulimia nervosa, according to the National Eating Disorders Association.

More like this
'The Queen’s Gambit' Season 2 Tweet Wasn’t From Anya Taylor-Joy
By Mary Kate McGrath, Jack Irvin and Grace Wehniainen
Netflix Shut Down 'Bridgerton' S3 Rumours About A “Very Dark” Storyline
By Bustle
'The Crown' Season 6 Has Suspended Filming "Out Of Respect" For The Queen's Death
By Bustle Staff
Ashton Kutcher Wants Danny Masterson “To Be Found Innocent” In Rape Retrial
By Jake Viswanath
Get Even More From Bustle — Sign Up For The Newsletter
From hair trends to relationship advice, our daily newsletter has everything you need to sound like a person who’s on TikTok, even if you aren’t.