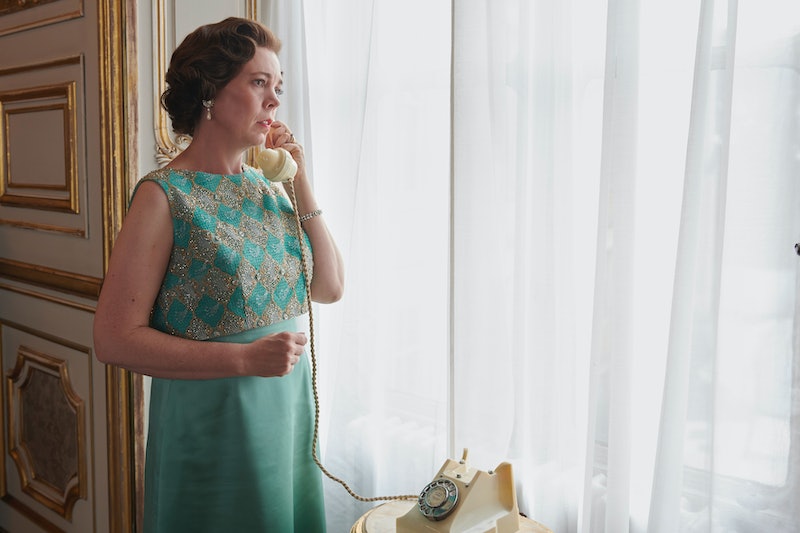 The Crown may be about the life and rule of Queen Elizabeth II, but another monarch appears to be taking center stage in the new season. On Thursday, August 20, Netflix released the teaser trailer for The Crown Season 4, which seems to be building up to one of the most iconic moments in the Royal Family's history: the 1981 wedding of Prince Charles and Diana Spencer. The streaming service also announced that new episodes of The Crown will premiere on November 15, 2020.

The clip — which was released on Twitter — teases Emma Corrin's debut as the late Princess Diana, showing glimpses of her (and her iconic haircut) only from behind or in shadow as she deals with paparazzi and the constant attention of becoming a royal. It all leads up to the dramatic reveal of Diana in her grand wedding gown, as she prepares to walk down the aisle on that fateful day. Season 3 of The Crown ended with Queen Elizabeth (Olivia Coleman)'s Silver Jubilee, which took place just a few months before Charles met Diana, so it seems likely that viewers will get to see the show's interpretation of their marriage from the very beginning.

Of course, Diana isn't the only formidable woman that Coleman's queen will come face-to-face with in the upcoming episodes. The Season 4 trailer also gives fans a glimpse of Gillian Anderson as Prime Minister Margaret Thatcher, as the series delves into the reportedly "complicated" relationship between the Iron Lady and Queen Elizabeth. Some kind of conflict between the pair is also touched on in the clip, with Coleman stating that "something as important as the monarchy cannot be allowed to fail," while shots of Thatcher's stiff suits and structured hairdo flash across the screen.

While it's unclear how much time Season 4 of The Crown will cover, it seems that the series will pick up at the very end of the 1970s, with Thatcher coming into power in 1979. In December 2018, Corrin and Josh O'Connor (who plays Prince Charles) were spotted filming Charles and Diana's 1983 royal tour of Australia alongside an infant actor as Prince William. Diana famously insisted on bringing a then-nine-month-old William on the trip with her, marking it as the young prince's first official royal engagement.

It also marked a marked a major change in royal protocol, as up until that trip, it was tradition for the Royal Family to travel abroad without their children, who would be left in the care of nannies and relatives. It seems likely that Diana's departures from protocol and struggles against the constraints of royalty will play a role in the upcoming season, and the conflict between her, Charles and Queen Elizabeth.

Diana will also likely have to contend with Charles' remaining feelings for Camilla Parker-Bowles (Emerald Fennell), after he was forced to end his relationship with her in the late 1970s." What’s interesting is it’s kind of echoing the same stuff that happened in Season 1 with Vanessa Kirby’s character, Margaret," O’Connor told Entertainment Tonight in November 2018, referencing the late princess' doomed romance with Peter Townsend while confirming that the Charles-Diana-Camilla love triangle will play a big role going forward. "Again, you know, you can kind of see the echoes of those series" in the upcoming episodes.

The Season 4 trailer comes just days after Netflix announced that Elizabeth Debicki will play Diana in the final two seasons of The Crown. Based on the casting, it seems likely that Season 5 and 6 will address Charles and Diana's highly-publicized divorce, and her tragic death in a car crash in 1997. "Princess Diana's spirit, her words, and her actions live in the hearts of so many," Debicki said in a statement about her casting. "It is my true privilege and honor to be joining this masterful series, which has had be absolutely hooked from episode one."