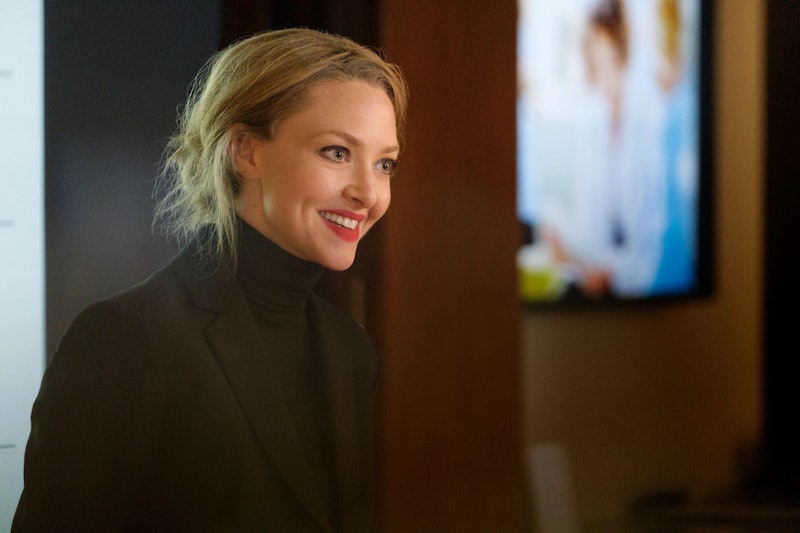 There are so many unusual parts to the story of Elizabeth Holmes, but there’s one you have to hear to believe: her voice. With Hulu’s new miniseries The Dropout following the Theranos founder’s journey from tech wunderkind to convicted criminal, star Amanda Seyfried had to recreate Holmes’ distinctive tenor. It was a challenge that initially left the actor’s throat sore, and it’s one that has again made Holmes’ voice a big topic of conversation. Since the show’s March 3 premiere, countless viewers have turned to Twitter to discuss Seyfried’s recreation of “the voice.”

“People are always talking about the voice,” Seyfried recently told the Los Angeles Times, explaining her determination to get it right. “It’s the first thing people mentioned. … The voice is the foundation. If you don’t, it’s like you’re missing the whole thing.”

Whether or not Holmes’ voice is even real has been much-discussed since her rise and fall, and in The Dropout, it is finally addressed in the third episode. The fact that it wasn’t there from the start was a point of confusion for some viewers. However, good Samaritans were kind enough to reassure other viewers that yes, the voice was indeed coming. “For those wondering, Elizabeth Holmes doesn't start to lower her voice until halfway through episode 3,” one person tweeted.

Seyfried impressed many viewers with her take on Holmes’ voice. There were tweets calling her version “perfection,” “so good,” and “next level.” At least one fan felt she was already “making a case to receive an Emmy nomination this year.” Hopefully that means the pain was worth it — as Seyfried told the LA Times, she was worried she was harming her vocal cords when she began talking like the Theranos founder because her throat would “get a little sore” from it.

Other viewers tweeted more negative descriptors of the voice, but considering the uniqueness of Holmes’ original version, they may actually have been complimenting Seyfried nonetheless. Some called it “insane,” “so distracting,” and “extremely annoying,” and one person even wanted a “JUMPSCARE triggering [sic] warning.”

Strange as most people seemed to find the voice, at least a few couldn’t help but try to mimic it themselves. “I’m 5 minutes into The Dropout, and all I’ll be thinking about and impersonating for weeks is Amanda Seyfried’s Elizabeth Holmes voice,” one fan wrote.

Thanks to the voice, there were Inventing Anna comparisons, as the Netflix miniseries has its own protagonist with a unique way of speaking.

It’s very apparent that the voice has been one of the lasting impressions of the miniseries.

The Dropout is now streaming on Hulu.

More like this
Pete Davidson Runs To Shower With Kim K In 'The Kardashians' Season 2 Trailer
By Jake Viswanath
Dr. Anna Pou Is Still Practicing Medicine After Facing Murder Charges
By Brad Witter
'Children of the Underground' Subject Faye Yager Now Runs A North Carolina B&B
By Brad Witter
The 'Black Bird' Stars Are Both Heading Back To Apple TV+
By Brad Witter
Get Even More From Bustle — Sign Up For The Newsletter