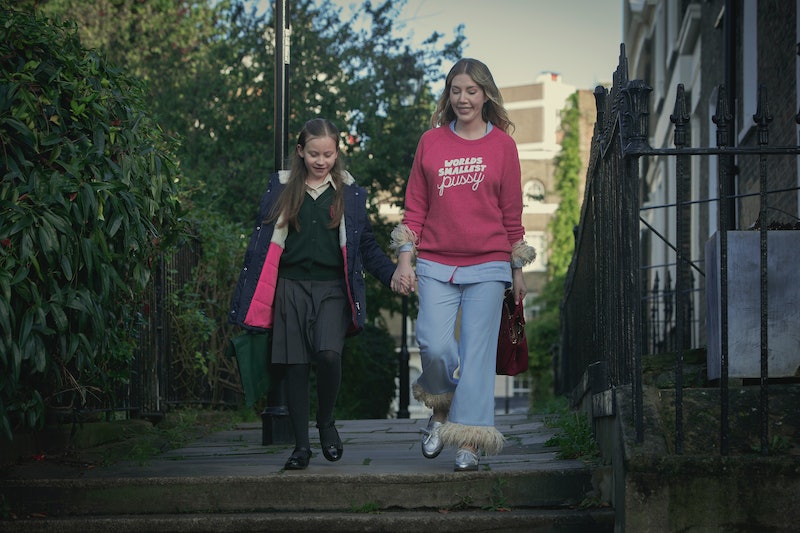 For her new Netflix series The Duchess, the Canada-born, London-based comedian Katherine Ryan wrote about a Canadian woman in her mid-30s living in London with a daughter, Olive, who is about the same age as Ryan’s own daughter Violet. Like Ryan, the character she plays is cynically hilarious, with a wry, playful sense of fashion that can vacillate between the dramatic and the inappropriate — in the series pilot, she drops her kid off at school in a “World's Smallest Pussy” sweatshirt thrown on over ostrich-cuffed pajamas. But even if the broad sketch of the character didn’t resemble Ryan’s own biography, it would be hard to resist claiming that The Duchess is based on the true story of Katherine Ryan's life. “[The character's] name is Katherine Ryan out of pure laziness,” Ryan recently said of her eponymous TV protagonist. “I always meant to change her name, and then I just thought, ‘Oh well.'”

Ryan’s stand-up routines have long been grounded in her personal experience. “I can play a heightened version of myself,” she once told The Guardian. “But I am no Judi Dench.” After a decade abroad, she considers herself a consummate Londoner, more familiar with the rhythms of life in the UK than in Ontario, where she grew up. “It’s a struggle to gig abroad sometimes because all my references are based on life here,” she confessed last year. On The Duchess, that liability is rendered a feature, especially in scenes set just outside the schoolyard, where mothers conspire to socially engineer their children's lives behind their backs. Ryan is writing the life that, until her civil partnership last year, she knew best: expat single mom to an exacting English daughter.

"Violet is very English and she pulls rank. She'll correct my Canadian accent all the time. She'll say 'I'm so sorry about my mummy: she's Canadian.' I just naturally defer to her,” Ryan told a BBC genealogy program. "It's the accent." Her on-screen daughter is similarly precocious, begging to be "excused" from her seat at the kitchen island and preferring the formality she sees on British television to her mother’s lax North American style. Which is not to say their relationship lacks affection. They crawl into the same warm bed together at night; 10-year-old Olive, in search of a sibling, tags along when her mother visits a fertility specialist.

Still, there’s a difference between comedy intimately inspired and a storyline that’s been ripped from real life. Ryan promises she’s less disruptive than her TV counterpart, and less narcissistic, too. Plus, glaring biographical liberties were taken, as Ryan reminded reporters at a recent media event: "In my real life though, I've not been pregnant by a boyband star, and I don't shout at the mums at the school gates.”