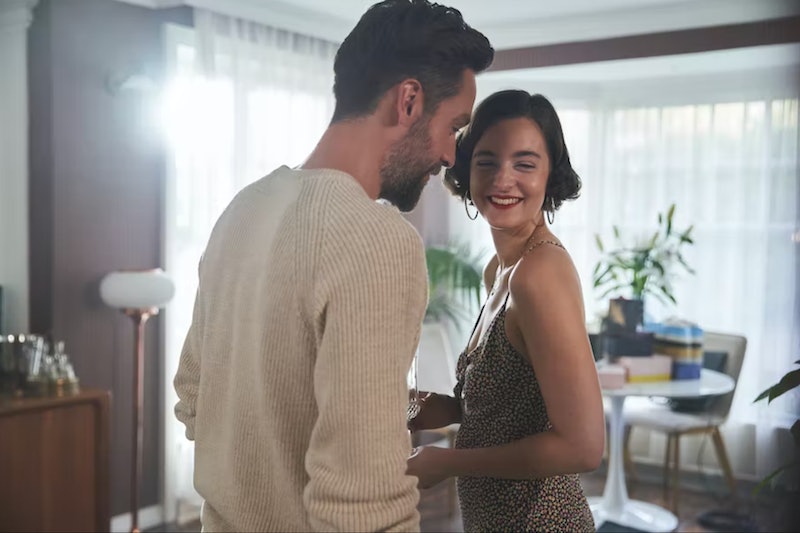 Spoiler alert: This article contains spoilers for The Ex-Wife book and TV show.

Adapted from the book of the same name by Jess Ryder, The Ex-Wife is proving to be a dramatic watch. Adapted for the screen by Downton Abbey’s Catherine Steadman, in her screenwriting debut for Paramount+, the series stars Showtrial’s Céline Buckens as Natasha, a newly married woman who returns home one day to find her husband and their daughter missing.

She reluctantly decides to get help from her husband’s ex-wife, the one he cheated on with her. As the story unravels, Natasha comes to learn her husband’s true motives, and what this will mean for their daughter. If you’ve yet to read the book and are eager to find out what happens, here’s what you need to know about The Ex-Wife book ending.

In the gripping story, Natasha returns home one day to find her husband, Nick (Jack in the show), and daughter missing, days after she discovers he was having an affair with his ex-wife, Jen. In an effort to find them, she gets in contact with Jen. Written from her perspective, Jen reveals that Nick told her he was in the wrong family and wanted her back, with Emily as their child.

Jen agrees to help find Nick and Emily, wanting revenge after his affair with Natasha. But it turns out she's in on Nick's plan to get rid of Natasha by luring her to a remote lake house to kill her so they can start a new life together. This doesn't go to plan, and Natasha ends up escaping and nearly killing Nick. At the same time, Jen hides with Emily in an undisclosed location.

Jen slowly realises that she's as much a victim of Nick as Natasha. So she decides to secretly contact her, revealing Nick's plans to fly the three of them to Canada and his attempts to get rid of Natasha again. Jen tells her where they're staying before they leave and to meet in the car park, where she'll hand over Emily.

On the way to the airport, Nick spots Natasha driving in the same direction as them and tries to take the wheel from Jen. They collide with a truck, causing a chain reaction and dozens of deaths, including Emily.

Well, that's at least what Jen thinks. In reality, Natasha returned to rescue Emily, which a partially conscious Nick saw. He barely survives the crash and is now suffering from locked-in syndrome. When (or if) he recovers, he plans on telling his sister Hayley everything so she can kill both Natasha and Jen.

Meanwhile, Natasha and Jen are in hiding, living completely different lives under their new aliases — Sarah and Anna. Meanwhile, Jen is wracked with guilt over Emily's death. Natasha decides it's time to tell her the truth and shows her that Emily is, in fact, alive.

More like this
Everything To Know About The 'Daisy Jones & The Six' TV Series
By Maxine Harrison and Brad Witter
'Magpie Murders' S2 Will Include A *Major* Shake-Up
By Sophie McEvoy
The Song At The End Of 'The Last Of Us' Ep 1 Has A Deeper Meaning
By Sophie McEvoy
'The Last Of Us' Has Officially Been Renewed For Season 2
By Darshita Goyal
Get The Very Best Of Bustle/UK
Sign up for Bustle UK's twice-weekly newsletter, featuring the latest must-watch TV, moving personal stories, and expert advice on the hottest viral buys.