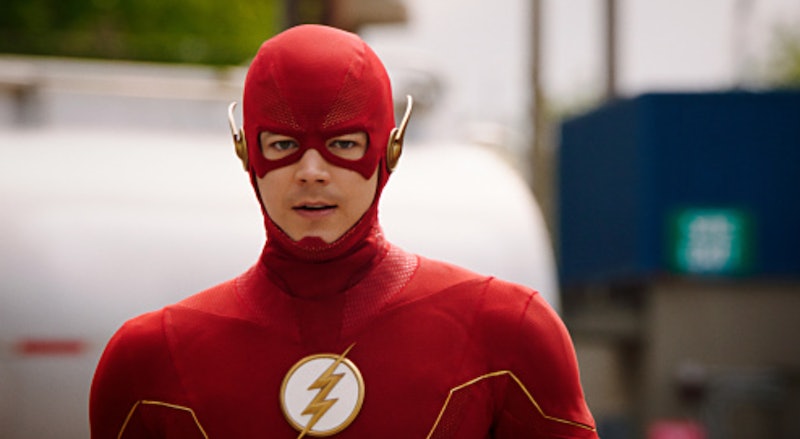 Since 2014, The Flash has followed Barry Allen (Grant Gustin) as he uses his superhero speed to battle villainous forces in Central City. The CW series’ seventh season saw him face off with evil tech founder Eva McCulloch (Efrat Dor) and attempt to end the escalating speedster war to take down Godspeed. Things will come to a head in the Season 7 finale, which will also introduce Barry and Iris’ future son, Bart Allen. But fans won’t have to wait long to dive back into the action: The Flash was renewed for Season 8 in February.

Here’s everything we know about the upcoming season.

Following its Season 7 finale on July 20, The Flash will return for Season 8 on Nov. 16, 2021 and continue to air on Tuesdays in its regular 8 p.m. ET time slot. The premiere will be the first of five crossover episodes that will open the season, putting The Flash alongside familiar faces from The Arrowverse. As in previous seasons, there are expected to be between 18 and 23 episodes, which will air through May 2022 on The CW.

Gustin will of course return as the titular Flash, as will Jesse L. Martin as Joe West, Danielle Panabaker as Caitlin Snow, and Candice Patton as Iris West-Allen. This is reassuring, given that Martin, Panabaker and Patton all had expiring contracts heading into Season 7. (Gustin’s contract is up at the end of Season 8, per Deadline).

However, two main actors have departed the show: Carlos Valdes, who played Cisco Ramon/Macha-Vibe, and Tom Cavanaugh, who played Eobard Thawne/Reverse-Flash as well as various versions of Harrison Wells. “The idea [of leaving] was always there, but I don't think I felt comfortable acting on it until much later,” Valdes told Entertainment Weekly of his exit. “I'm the child of an immigrant, so my whole ethos is ‘earn your place or card’ and I think that's what I did for a long time ... A lot of joy and satisfaction and career rewards and momentum have come from that. And I'm so appreciative of that, but at the end of the day, mental health is important ... For me to step away from the show, it's a way of me taking care of myself.”

Cavanaugh, for his part, shared a goodbye post on Instagram. “It has been a joy creating and playing the myriad Wells that make up ‘Wells st’ on #theFlash,” he wrote. “At times brusque, sunny, capricious, and perpetually shameless, they will always be linked by a single unbreakable thread of gratitude. My thanks to everyone on all sides of the screen that makes up this wee superhero show of ours.”

Not much is known about the plot of Season 8, but fans can expect the same Speed Force heroics, pathos, and drama that they’ve come to enjoy. The show’s team also hasn’t confirmed which Arrowverse characters will be in the five-episode crossover event, but Black Lightning star Cress Williams (Jefferson Pierce / Black Lightning) confirmed to Entertainment Weekly in May that he’d been in talks to appear. "I really enjoyed the crossover [in 2019]. Specifically, I think me and Grant [Gustin], we're just very like-minded in how we approach the work, and we had really great conversations,” Williams said. “One of my favorite scenes of doing this character was the scene between me and him in the library [on the Waverider in Crisis on Infinite Earths.] So the thought of being able to go back and do an episode here or an episode there? Oh yeah, no, I'm down for that."

A trailer for Season 8 has not yet been released, but this post will be updated as more information becomes available.