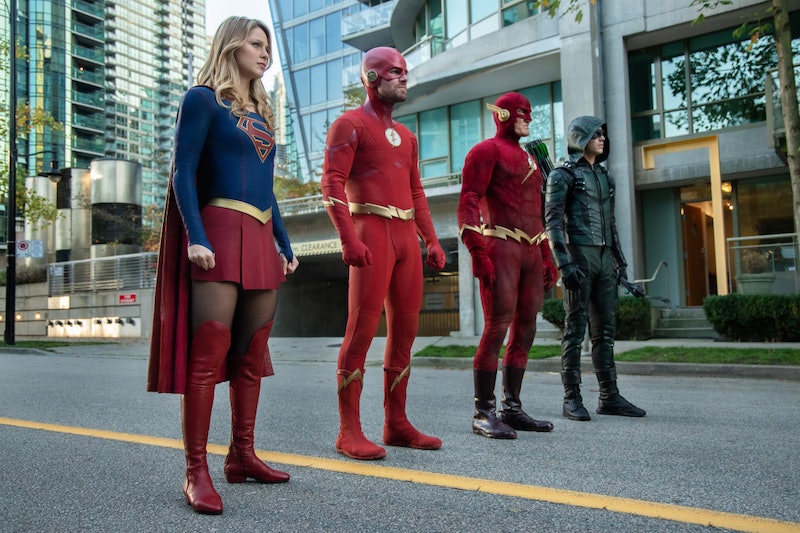 Spoilers ahead for the Arrowverse Elseworlds crossover. To say this year's Arrowverse crossover was a game changer would be an understatement. It not only left fans with some epic fights and cliffhangers, it also revealed that "Crisis On Infinite Earths" is coming to the Arrowverse in fall 2019. Any DC comic fan knows that this means certain doom for some major characters, and it might be the biggest crossover the TV heroes have seen yet.

On the "Elseworlds Part 3" episode, the final chapter in this year's crossover, Arrow, The Flash, and Supergirl seem to have come out on top of Dr. John Deegan and The Monitor. However, it's still not very clear what The Monitor's motives were; they seemed malicious, but there were also times he didn't strike when he definitely could have. Despite this "happy" ending, however, several things point to a major, catastrophic event happening in the Arrowverse.

For one, even though Deegan is locked up in Arkham Asylum, Kate Kane calls Kara up to alert her to the fact that he's made friends with another inmate. The camera pans to a prisoner seen earlier with a golden mask. Pulling from the comics, that man is Roger Hayden, aka Psycho-Pirate. Then the words "Crisis on Infinite Earths Fall 2019" emerged on-screen. All of this is basically a warning call that the comic book version of "Crisis" is going to go down next season, and fans need to buckle up.

The word "Crisis" has been thrown around a lot in the Arrowverse already — a few times being during this crossover, and even last crossover with "Crisis On Earth-X." However, fans of The Flash know that their favorite hero, Barry Allen, goes missing in a crisis that happens in the future, on April 25, 2024. Articles written by Iris — Barry's wife — were shown with the headlines "Flash Missing — Vanishes In Crisis" and "Red Skies Vanish." As was seen in Elseworlds, the red lighting skies were a harbinger for the Monitor and his scheming. So as the comics suggest, the Monitor will come back — which is of course to be expected, considering his storyline has to do with "Crisis On Infinite Earths" as well.

Twitter user @DT2ComicsChat also pointed out that the Monitor mentioned a "he" is coming, which is most likely the Anti-Monitor, the sinister one out of the two. In fact, the Monitor in the comics was created because the Anti-Monitor came into being; he's supposed to protect the Multiverse from his nefarious counterparty. As IGN reports, the Monitor uses the Book of Destiny to turn the existing superheroes into greater warriors and fight back against the Anti-Monitor. That last bit was already seen in this crossover, even if it wasn't super obvious if he was helping or hurting the heroes.

This announcement of the crossover a whole year in advance is unlike how it's gone in the past. Usually, the CW announces the crossover topic in the summer, or as was the case this year, not until September. Does this mean that it'll be more than a crossover, and drive the plots for all of the shows? The Flash showrunner Todd Helbing told ComicBook.com in November that executive producer Greg Berlanti has had "Crisis" planned out for quite a while. "Greg [Berlanti] really has a sort of master plan of things, and I'm really excited about how it's going to pay off," he said when asked about “Crisis On Infinite Earths.”

However, if you're familiar with how the comics end when it comes to this "Crisis," it' not good for some major players in the Arrowverse. One eagle-eyed Twitter user, @Katralax_, was able to grab a pretty good screenshot of that article, and you can read a little bit more, including the fact that Supergirl and the Atom go missing. And with that, you might be able to sort out what might happen in the Arrowverse’s version of "Crisis On Infinite Earths." The comics follow this pattern too, except in the comics it goes one step further with both Kara and Barry dying in their fight against the Anti-Monitor.

In the comics, "Crisis On Infinite Earths" also saw a major change to how the Multiverse works, in that it converged or shifted all of them together into a new existence. So with huge potential deaths that would leave fans heartbroken, and a new Arrowverse different than what was established six years ago, this "Crisis On Infinite Earths" has the capacity to change everything. Maybe fans should thank The CW for giving them a year in advance to gear up for what's to come, but also... maybe not.