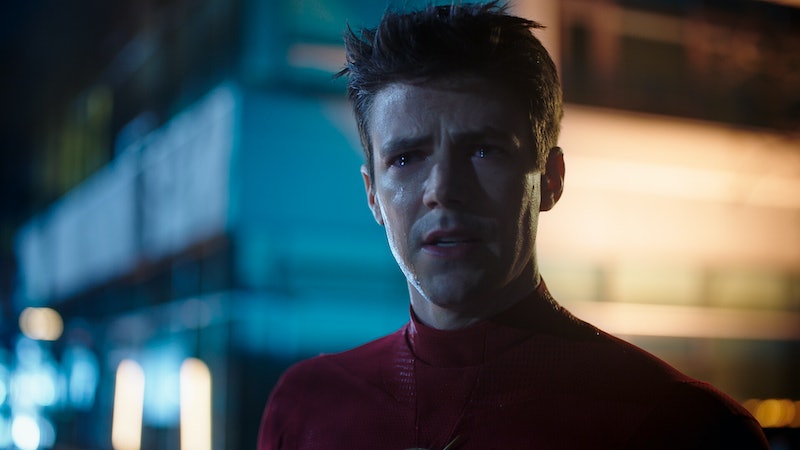 The Arrowverse’s longest-running series — The Flash — will return for Season 9, The CW announced in March. But just a few months later, the network confirmed that the DC show's ninth season will also be its last. On top of that, the final season will be shorter than expected with a 13-episode run. “Nine seasons! Nine years of saving Central City while taking audiences on an emotional journey full of heart, humor and spectacle,” Flash showrunner Eric Wallace said in a statement, also thanking the show’s “phenomenal” cast and crew for their work over the years.

Fans last saw The Flash in June 29’s “Negative, Part Two,” the Season 8 finale which found the team rallying to support The Flash (Grant Gustin) when he needs them the most. Following the many recent reveals — including Tom Cavanagh’s Eobard Thawne (aka Reverse-Flash) brutally shedding light on Iris’ tragic Time Sickness death — Wallace teased to TVLine that the episode answers several burning questions.

“You’ll hear it in the words of the people who are putting this all together, the masterminds behind everything that’s been happening in Season 8,” he said. “You will get an explanation from our “Big Bads,” the Negative Forces themselves [played by Christian Magby, Ennis Esmer and Sara Garcia], about why they’re doing what they’re doing, and why they did it now, which is pretty awesome.”

Don't expect all the answers though, as the superhero drama sets up its final chapter. Here’s everything to know about The Flash Season 9 so far.

The CW has yet to announce which actors are returning, but Gustin’s deal to reprise his Barry Allen/The Flash role in early 2022 reportedly paved the way for the Season 9 renewal. On June 28, TVLine reported that original cast member Candice Patton will also return as intrepid journalist Iris West-Allen for Season 9, though the actor previously indicated that her future on the show was uncertain. During an early April Instagram AMA, she told one fan that she was “not quite sure” if she’d be back and was taking it “one date at a time,” per TVLine. Later that month, she captioned a video “THAT’S A WRAP ON IRIS WEST-ALLEN,” further sowing doubt about her character's future on the show.

Meanwhile, Jesse L. Martin announced in April that he is exiting The Flash as a series regular after eight seasons of playing Detective Joe West to star in an NBC pilot, The Irrational. Other main cast members in The Flash Season 8 who could return include Danielle Panabaker (Caitlin Snow/Killer Frost), Danielle Nicolet (Cecile Horton), Kayla Compton (Allegra Garcia), and Brandon McKnight (Chester P. Runk), among others.

Season 9 plot details are being kept under wraps for now, with Wallace revealing the reason John Diggle’s (David Ramsey) Green Lantern-style arc ended ahead of the next chapter. The short version? The Flash wasn’t renewed for Season 9 until after the final script was written, and they wanted to ensure the character got a proper sendoff. “We were thinking, ‘Oh my goodness, we have to do this because maybe no one will get a chance to!'” he told TVLine. “I talked to David [Ramsey] myself, and told him, ‘I’d like to give this some closure,’ and he was all in favor of it. And when I told him what we had planned, he thought it sounded fantastic.”

Wallace further hinted that Diggle’s turning down his “cosmic” invitation “served a larger purpose” by further teasing a Blackest Night storyline from the comic books. As of now, he’s unsure if Season 9 will be The Flash’s last though, so the storyline still might not get there. “I’m a comic book nerd and I wanted to plant some Blackest Night seeds, and that Diggle moment helped me do that,” he shared. “But I don’t know if we’ll ever get to it.”

Fans are also predicting that the villainous Bloodwork, aka. Dr. Ramsey Rosso, (Sendhil Ramamurthy) — who last appeared during Season 6 — will return to wreak havoc in Season 9. DC's Arrowverse-set comic book series Earth-Prime reportedly included Bloodwork escaping his imprisonment, with a promise that the story was “To be continued in Season 9 of The Flash.”

The network hasn’t announced a return date but did reveal Season 9 will premiere midseason in 2023. This will be a schedule shift for the series, which has premiered seven of its eight previous seasons in the fall. (The Covid-delayed Season 7 landed in March 2021.) With Season 9 beginning production in September 2022, expect this final outing to premiere sometime around January 2023.

This post will be updated as more details about The Flash Season 9 become available.

This article was originally published on June 30, 2022