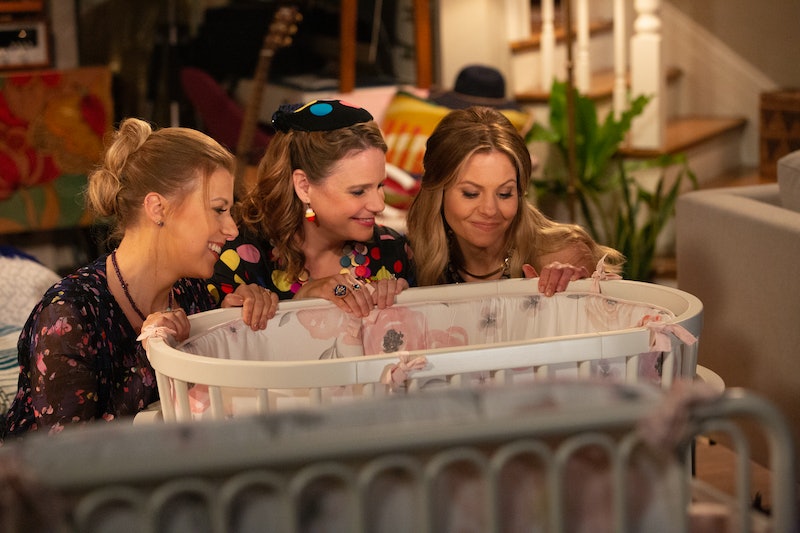 Spoilers for the Fuller House series finale. The Fuller House series finale may have felt like it was setting itself up for future episodes, with DJ even pointedly saying in the closing moments, "The door is always open." But it won't be opening back up any time soon: Netflix canceled Fuller House after five seasons, which means this is genuinely the end of the show...at least for the foreseeable future. The cast has been clear that they would reprise their roles, and the ambiguous finale allows for more stories to possibly be told down the road.

Originally, Kimmy's family and Stephanie's family were both going to move out of the Tanner house after their wedding. Kimmy's husband Fernando was set to manage the new location of their sandwich franchise in Palo Alto, so they were moving closer to the store. (Palo Alto is about a 30 minute drive from San Francisco.) Stephanie and her husband Jimmy, meanwhile, were going to get their own place now that they're married. But mere seconds after moving out, they all regretted it.

Not long after DJ locked the door behind Kimmy and Stephanie, they were knocking to ask if they could move back in. The women both recognized that they could move out if they wanted, but they didn't want to. The good news that they weren't leaving was quickly overshadowed by the even better news: Stephanie is expecting a baby after long thinking she wasn't able to get pregnant. "There's nowhere else I'd rather be, especially with a new baby on the way," Stephanie told her sister.

It's kind of a fake-out ending, but keeping the three families under one roof quite literally leaves the door open for the show to be picked up for another reboot. Andrea Barber and Candace Cameron Bure (who play Kimmy and DJ, respectively), told TV Insider that they both hope another reboot can happen someday.

"We talk about that all the time and put it out there so much. Who knows what will happen in 10 or 15 years. Never say never," Bure said. "If there is another opportunity, I know all of us would reprise these characters again."

Barber added that wrapping on Season 5 didn't feel like the last time she'd step into Kimmy's shoes. "I really want to play this character and see where she is and see her grow," Barber said. "We've seen Kimmy, DJ, and Stephanie since they were 5 and 10. Let's continue it into our 60s. Let's see them as the Golden Girls of the new generation. I'm ready."

If the show does return, it will be pretty cramped in the Tanner house. Kimmy and Fernando are in the attic, Ramona's in one bedroom, Max and Jackson are in another room, Tommy is in yet another room, DJ and Steve are in the master bedroom, and Stephanie, Jimmy, Danielle, and their new baby are in the basement. If Jackson and Ramona grow up and have their own kids and marriages and move back in for a 10-years-from-now reboot, it wouldn't be Fuller House. It would be the Fullest House.

More like this
Ashton Kutcher Wants Danny Masterson “To Be Found Innocent” In Rape Retrial
By Jake Viswanath
All The ’70s Easter Eggs You Missed In 'That ’90s Show'
By Grace Wehniainen
At 28, Debra Jo Rupp Was Living A Much Different '70s Show
By Grace Wehniainen
'That '90s Show' Is Officially Coming Back For Season 2
By Gretchen Smail and Grace Wehniainen
Get Even More From Bustle — Sign Up For The Newsletter
From hair trends to relationship advice, our daily newsletter has everything you need to sound like a person who’s on TikTok, even if you aren’t.