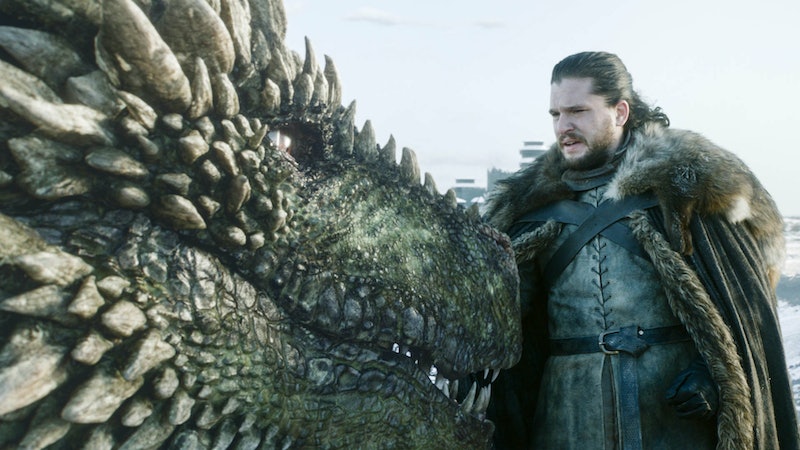 There's a new Game of Thrones prequel on the HBO horizon and it's all about Fire & Blood (the George R.R. Martin book, that is). HBO announced that the new Game of Thrones prequel House of the Dragon is happening via the official Twitter account of the main show in 2019, and provided an exciting update nearly two years later. As of April 26, 2021, the series is in production, confirmed by the numerous flame emojis and casting news the GoT Twitter account posted the morning after the 2021 Oscars.

Per the initial announcement two years ago, the prequel will be created by the original GoT books author Martin and Ryan Condal. Emmy-winning GoT director Miguel Sapochnik will join Condal as showrunners on House of the Dragon, with Condal penning the show. At the time, Entertainment Weekly's James Hibberd reported that 10 episodes were already ordered by HBO. As House of the Dragon's official art states below, the show will be based on Martin's book Fire & Blood, which chronicles roughly 150 years of history of the House Targaryen. Game of Thrones' Daenerys (played by Emilia Clarke) and Jon Snow (Kit Harington) both belonged to House Targaryen, and the series will look at their storied ancestors in the events leading up to the Dance of Dragons, as reported by EW.

Over on the official House of the Dragon Twitter account, HBO revealed Steve Toussaint (Small Axe) will star as The Sea Snake, Matt Smith (The Crown) will play Prince Daemon Targaryen, and Olivia Cooke (Sound of Metal) will portray Alicent Hightower. Rhys Ifans (The Amazing Spider-Man) will round out the cast as Otto Hightower along with Paddy Considine (Peaky Blinders), who will take on the role of King Viserys Targaryen, and Emma D’Arcy (Truth Seekers) as Princess Rhaenyra Targaryen.

This prequel may sound familiar. Back in September 2019, many media outlets reported that a prequel based on Fire & Blood was nearing a pilot order at HBO. (At the time, the network declined to comment on the reports.)

While this prequel has the go-head from HBO, another one was dropped from the network's development roster. Several media outlets, including EW, Deadline, and The Hollywood Reporter, reported that the GoT prequel starring Naomi Watts from Jane Goodman about the Age of Heroes is no longer going forward.

Several Game of Thrones prequels were rumored after the original series wrapped its eight-year run on HBO back in May 2019, but only one has so far made it to series. On May 4, Martin wrote on his blog that five GoT spinoffs and prequels were once in development at HBO and "three of them are still moving forward nicely." The author included a hint to fans to "pick up a copy of Fire & Blood." So far, House of the Dragon is the only GoT prequel to be officially announced and confirmed by HBO. The House of the Dragon prequel will reportedly release sometime next year.

More like this
Netflix Shut Down 'Bridgerton' S3 Rumours About A “Very Dark” Storyline
By Bustle
'The Last Of Us' Episode 4 Put Twitter Into An Emotional Spiral
By Alyssa Lapid
Bill & Frank’s 'The Last Of Us' Episode Has Twitter Emotionally Wrecked
By Alyssa Lapid
Here’s What Happens To Bill & Frank In 'The Last Of Us' Video Game
By Brad Witter
Get Even More From Bustle — Sign Up For The Newsletter
From hair trends to relationship advice, our daily newsletter has everything you need to sound like a person who’s on TikTok, even if you aren’t.