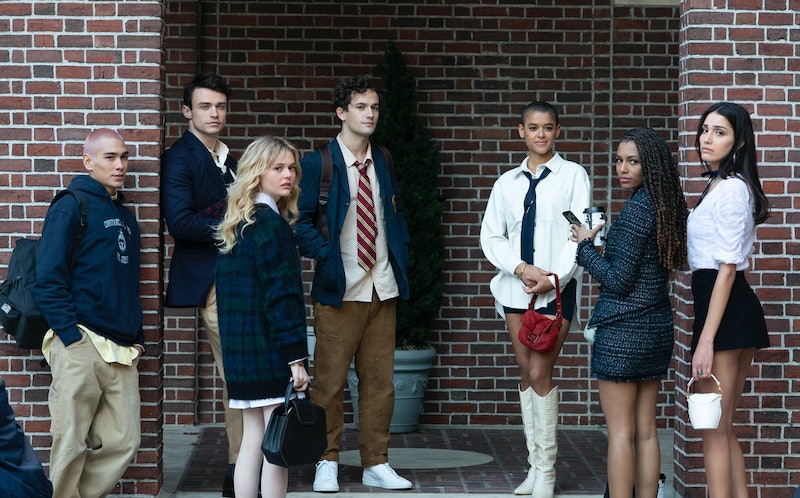 Joshua Safran has one regret about Gossip Girl. “[There wasn’t] representation for people of color and gay story lines,” the writer, who served as an executive producer on the original series and developed the upcoming HBO Max reboot, told Vulture in 2017. “Those are the two things I think we probably could have delved into more deeply.”

The new show corrects this. Whereas the original series had all white and heterosexual characters, Safran promised on Twitter that the reboot would be “very, very queer.” In addition, one of the actors is transgender, and there are several people of color in the main cast.

The series, which premieres on July 8, picks up nine years after Gossip Girl’s blog shuttered and follows a new group of wealthy Upper East Side students. At the start of the show, a Gossip Girl Instagram crops up and begins posting about their lives. According to a press release, the story will explore “just how much social media — and the landscape of New York itself — has changed” since Gossip Girl fans last peered inside the lives of Manhattan’s elite.

What better way, then, to get to know the new cast than delving into their Instagrams?

Social media influencer Julien is the queen of Constance Billard. But when a new student comes to town, her status is threatened. She’s played by Jordan Alexander, who identifies as queer, according to Nylon. Alexander previously acted in the TV show Sacred Lies and she’s also a musician. On her Instagram, you can see her impressive modeling photos as well as some videos of her musical talent.

Fans may recognize Peak from Chilling Adventures of Sabrina, on which she played Judith. Her Instagram is equal parts glam and down-to-earth. There are plenty of high-fashion photos, but also some pictures of her doing normal things like hanging out with friends or eating microwave noodles.

Her Gossip Girl character Zoya is the new kid at school: she transfers to Constance Billard and, like Dan Humphrey, sticks out because of her middle class background.

Doherty plays Aki’s crush Max, who’s pansexual. You might recognize from his roles in High Fidelity or Legacies, or because he dated Dove Cameron for four years after appearing in The Decedents Disney Channel franchise together. On his Instagram, you’ll see a lot of his shirtless modeling photos.

People are already calling Audrey the Blair Waldorf of the reboot, since both characters’ mothers are fashion designers and both are friends with the shows’ respective Queen Bees Julien and Serena. Before landing her role on Gossip Girl, Lind appeared in Revenge, Code Black, and Sacred Lies (alongside her co-star Alexander). Her Instagram page is a mix of glamorous photoshoots and things she loves, like pictures of cats and old Hollywood stars.

Brown previously appeared on the Pretty Little Liars spinoff The Perfectionists. On Gossip Girl, he plays Otto Bergmann IV, an ultra wealthy student who sounds like he comes from a long line of powerful, well-to-do men.

However, you won’t learn much about Brown from Instagram; the actor hardly ever posts and has a total of only 18 photos.

Moreno, a transgender model, previously appeared in Netflix’s Control Z and now plays the stylish Luna La. Like Brown, Moreno doesn’t use Instagram as much as some celebs, with only 71 posts thus far.

Smith went to theater school, and Gossip Girl marks her first time onscreen. The show’s Instagram account described her character with the word “power,” so look out for Monet to perhaps be secretly pulling some strings. On her real Instagram page, Smith loves to show off her #OOTDs and glam adventures in NYC.

Gevinson is a bit of a Gossip Girl herself, having risen to the internet’s attention at age 12 with her fashion blog Style Rookie. She uses her Instagram as a sort of blog, posting photos of herself alongside news stories and art. On Gossip Girl, she plays the ambitious Kate Keller.