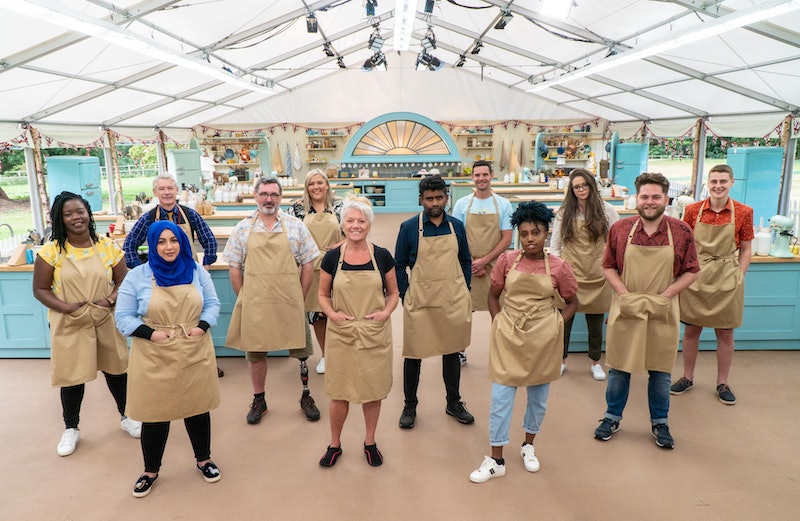 Set to begin next Tuesday (Sep. 22), 2020's Great British Bake Off contestants have finally been revealed. As enjoyable as it has been seeing the likes of Louis Theroux and James Blunt try their hand at baking in the celebrity spin off, it's always exciting to see the usual line-up of amateur bakers back in the tent hoping to wow the judges. So here's what to expect from this year's contestants, as well as new host Matt Lucas.

Due to the ongoing pandemic, a lot has changed on the set of GBBO. In a press statement sent to Bustle, Channel 4 writes that "the twelve new bakers entered a bubble for seven weeks in order to make the competition happen," with filming commencing over the summer rather than in April. A "biosphere" had to be created for the stars and production team, producer Kieran Smith told Radio Times, which led to some improvements in filming the series.

"Noel [Fielding] felt a lot happier in the bubble than he did in the real world. He'd pretty much been shielding in one location for several months, so the ability to walk in a green space and be able to talk to people face to face was liberating," Smith said. "It was the same with quite a few others. By the end, I was desperate to get out, but there was a freedom to it as well."

So who joined Fielding and the rest of the team in the tent? Say hello to the new bakers below.

Pharmacy dispenser Sura grew up surrounded by family "who offered food as a means to show affection, love and respect" and loves to improvise with her baking. She enjoys experimenting with flavours from around the world, especially from the "many Middle Eastern and Asian influences in her heritage."

Born and raised in Benin, West Africa, Hermine moved to London in 2001 for further education. When she was very young she loved helping her mum bake for family gatherings and first decided to go it alone in the kitchen at the age of eight. Hermine's baking has a distinct French influence, and she loves cooking marmalade and jams.

Digital Manager and Samaritans volunteer Laura started baking when she was eight years old, but only discovered her flair for cooking a few years ago. She loves putting modern twists on classics and specialises in decoration.

Linda's passion for baking stems from visiting her aunt's dairy farm as a child, where she learned to bake cakes topped with creamy icing made with milk from the farm. She loves to cultivate ingredients for her recipes from nature, whether that be in her garden or from the places around her home in East Sussex.

Makbul took on cooking and baking to support his mum at home, and his strengths lie in pastry and traditional Asian deserts like Nankhatai biscuits. He's recently started beekeeping and uses the honey his bees produce in his recipes.

Raised in Jamaica, diagnostic radiographer Loriea celebrates her Caribbean roots through baking. She started baking at five years old and moved to the UK when she was 15. Loriea never follows a recipe exactly and instead tries to find ways to tweak it to fit her own style.

As a young adult, Marc travelled the world, eventually settling back in the UK to become a landscape photographer. In 2016 he lost his leg in a motorbike accident which led him to bake as a form of therapy. Marc wanted to show his daughters "that even when life throws obstacles at you, you can rise to new challenges and develop new passions."

Lottie's great-grandmother was "a fervent cake-baker," so it's clear that baking is in her blood. Instead of playing with toys as a child, she'd rather watch cooking shows and make notes from cookery books. Lottie describes herself as a "perpetually frustrated perfectionist" when she bakes.

Armoured Guard Dave taught himself to cook once he moved out of his parents house and bakes at least once a week. He describes his baking style as "innovative and imaginative" and has strengths in making bread (pretzels, brioche rolls, and baguettes in particular) and in decoration.

A music teacher with an adoration for the Georgian era, Rowan loves to reinvent 18th-century recipes when he's baking. He has a passion for French Pâtissère and likes to decorate his bakes with flowers found in his garden.

Mark fell in love with baking after frequently visiting an Edinburgh pie shop while at uni. Since then, he's become quite the experimenter, "eventually taking on a multi-tiered wedding cake." He takes a lot of inspiration from his homeland of Northern Ireland, but also the credits he visits as a project manager for public health research programmes in Africa and Asia.

Accounting & finance student Peter cites Bake Off as his inspiration for baking. He's a big fan of the show and has watched every series since the first when he was 12 years old. He loves to celebrate his Scottish roots by using berries, whisky, oats, and honey in his recipes.