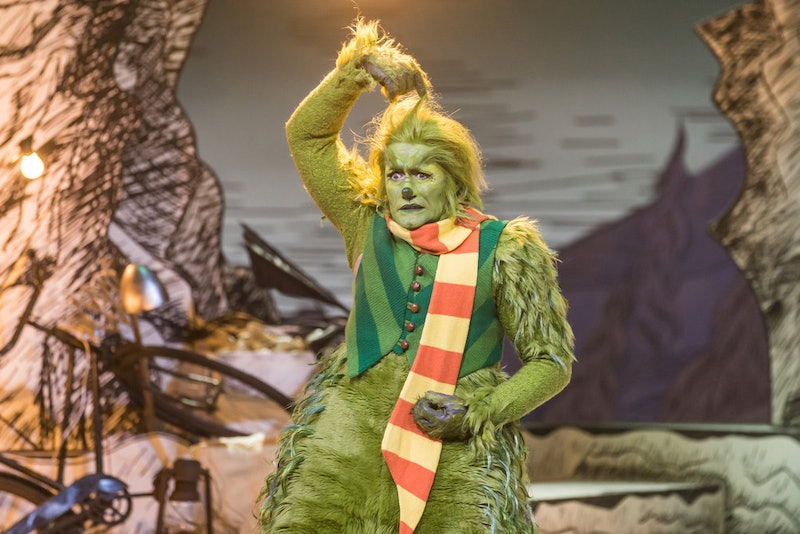 Dr. Seuss' the Grinch character has long been a holiday staple, but he's gained a different sort of notoriety since the announcement of NBC's The Grinch Musical! starring Matthew Morrison. Morrison has become somewhat of an amusingly reviled figure on TikTok, and seeing Morrison as the titular green grouch on Dec. 9 kicked off a wave of new Morrison Internet memes.

It's hard to really describe why Morrison inspires such loathing among Generation Z. While his role as the break-dancing Will Schuester in Glee plays a part, "Everything about him is kind of cringe, I think, to our generation," TikToker Nicole Ciravolo explained to Bustle.

Unsurprisingly, the Nov. 26 announcement of the musical was met with numerous jokes on Twitter. And it's not just because Morrison is the lead. Like many children's plays, the concept behind The Grinch Musical! has always been a little ridiculous. Similar to the Shrek the Musical and Spider-Man: Turn Off the Dark, there's something inherently comical about making an otherwise serious character the lead singer in a musical extravaganza. And of course in the wake of the Cats movie debacle, the Internet is now used to lampooning anthropomorphic singing characters.

Even the details around the musical felt like the set-up for a Saturday Night Live skit, with Morrison admitting his portrayal was partly inspired by a Batman villain. "I didn't want the Grinch to be a good dancer," Morrison told Entertainment Weekly. "I took a lot from Joaquin Phoenix's performance in Joker, just going down those steps, like loose and [reveling in] abandon and just carefree and raw."

All of this was just adding fuel to the fire, and of course the jokes began on Twitter as soon as the Grinch walked on stage and directly addressed the camera by saying, "We're not here to enjoy ourselves."

Other viewers couldn't help but joke about Booboo Stewart's role as the Grinch's dog Max.

The jokes continued when The Grinch walked out in a cowboy outfit, hoping to infiltrate Whoville. He briefly imitated Trump and then sang a twangy country song.

Eventually the Grinch donned his Santa outfit and attempted to steal all the Whoville presents and ruin Christmas.

Of course, the Grinch was eventually won over by the townspeople, and he realized he loved Christmas after all. While the Grinch had a change of heart, many of the viewers still found humor in the production.

Regardless of what everyone was saying though, Morrison took all the jokes in stride. He even live-tweeted a meme of his own during the broadcast.