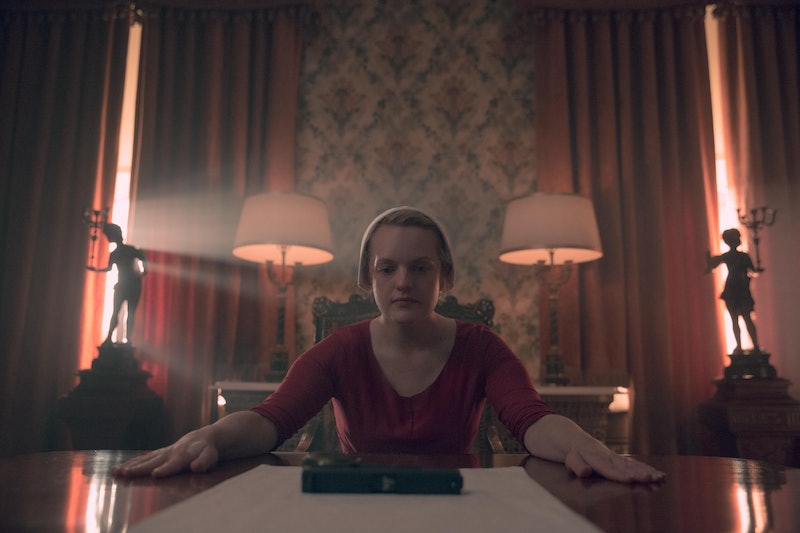 It’s been a little over a year and a half since we were last in The Handamid’s Tale’s Gilead, where conditions were always bad yet somehow getting worse. By the end of Season 3, June had grown from a troublemaker causing havoc in the Waterford house to a genuine hero: in the finale, she was left bleeding from at least one bullet wound while the Canadian government made hasty arrangements for the dozens of children she’d helped liberate. But to earn that moment of catharsis, we were first subjected to various kinds of agony. If, out of self-preservation, you promptly forgot everything that happened, that’s understandable. Ahead of the Season 4 premiere, here’s everything you need to remember about The Handmaid’s Tale Season 3.

Until she successfully got Nichole and Emily to Canada at the end of Season 2, June was content to nip at the ankles of power — making a little trouble around the Waterford house but never a big splash. That changes in Season 3. Freed from the immediate burden of worrying about her baby, she focuses her energy on getting back Hannah, her biological daughter from the Before Times. She visits Hannah in secret, but a tip-off about their rendezvous from another handmaid, Ofmatthew, leads to Hannah’s new family leaving Boston. June is rightly incensed, but it’s ultimately her relationship with Ofmatthew that pushes her toward activism. Forced to sit vigil by a vegetative Ofmatthew’s bed after the pregnant handmaid stole a guardian’s gun and got shot (long story), June considers pulling the plug on her life support but instead vows to free the children of this place, like she did for Nichole.

It turns out that June on a mission is ruthless. She ostracizes Ofmatthew before her death and later lets her new Commander’s wife, Eleanor, die of an intentional overdose because she was worried she’d expose her plan to free Gilead’s kids. June also murders Commander Winslow, but he was a violent rapist so it’s honestly hard to care.

When the season ends, June and the other handmaids involved in the Mayday rescue operation are making their way out of the woods with June slipping in and out of consciousness, her mind fluttering back to memories of Luke and Hannah. There’s a sense that June isn’t physically able to leave Gilead without Hannah, though she’s also unlikely to live if she stays.

In Season 3, there’s finally a bit of comeuppance for the cunning Serena Joy and her guileless husband Fred. After consenting to Nichole’s removal to Canada, a heartbroken Serena eventually reunites with Fred, and the two launch an international campaign to get “their” (read: June’s) daughter back. On a goodwill trip to see Nichole, an increasingly prominent Canadian diplomat named Mark offers to reunite Serena with Nichole permanently in exchange for delivering Fred onto Canadian soil, where he can be charged with international crimes. Serena does it, but Fred quickly and unexpectedly bites back. He tells Mark that Serena compelled June to have sex with Nick, and by the end of the season both are behind bars at a very zen-garden inspired detention facility.

Throughout June’s tenure at the Waterford household, her lover Nick Blaine remained enigmatically quiet. In Season 3, it’s revealed that there’s more evil to him than meets the eye. After the state executes his child-bride, Nick leaves Boston to take up a military position. But it’s hardly the new Commander’s first skirmish. As June attempts some international diplomacy on behalf of Nichole, she learns Nick played some vital (but unspecified) role in Gilead’s hostile takeover of America. So does he regret his participation in the overthrow of liberal democracy, or does he just have a soft spot for June? Stay tuned.

Most of the season’s back half follows Mayday’s quest to transport 86 children safely over the U.S. border, where they immediately crash into The Handmaid’s Tale’s “Meanwhile In Canada” storylines. Emily is still struggling to reconnect with her family since her own escape from Gilead, but they are taking it slow. Luke and Moira, who does NGO work now, have been raising Nichole, and they’re also on the frontlines of the refugee intake for some reason. In one of the season’s few tender moments, Luke meets Rita, who tells him that it’s June who made this rescue possible.

Can June pull off the same feat for Hannah, who is thriving with the only family she can really remember? And if not, can June ever make the brutal choice to leave Gilead without her? The answers feel like no and no, which means the most compassionate end for June might be a hero’s death.

More like this
Pamela Anderson's Sons Brandon & Dylan Have Their Own Hollywood Careers
By Arya Roshanian
Wait, Is Barney Stinson Related To Sophie On 'HIMYF'?
By Gretchen Smail
Pamela Anderson’s Dating & Marriage History Could Be Its Own TV Series
By Jake Viswanath
'The Crown' Season 6 Has Suspended Filming "Out Of Respect" For The Queen's Death
By Bustle Staff
Get Even More From Bustle — Sign Up For The Newsletter
From hair trends to relationship advice, our daily newsletter has everything you need to sound like a person who’s on TikTok, even if you aren’t.