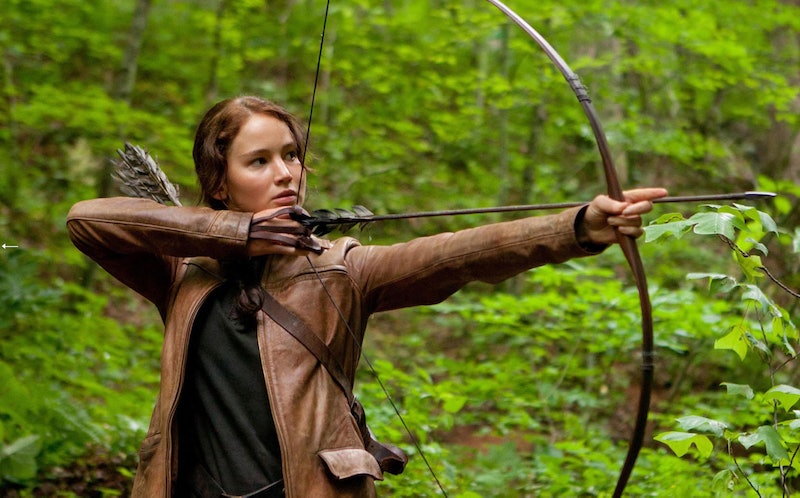 Spoilers ahead for the new Hunger Games book, The Ballad of Songbirds and Snakes, which takes place 64 years before Katniss Everdeen first heads into the Hunger Games arena. The prequel is almost entirely made up of new characters, excluding a young president Snow and his cousin Tigris who show up in the later books. And one of those newly introduced characters is Maude Ivory, who could be Katniss' grandma — if the fan theories are correct.

Readers meet Maude when young Coriolanus Snow becomes a peacekeeper in District 12. There, Maude is in a band with recent Hunger Games winner Lucy Gray Baird. There are several similarities between Maude, Katniss, and Katniss' father, besides the fact that they all lived in District 12 . And as fans started finishing the book, many flocked to Reddit to discuss the theory that Maude could be Katniss' grandma.

Among the major evidence that fans pointed to is that they share a knack for singing. Lucy Gray specifically mentioned in The Ballad of Songbirds and Snakes that "one hearing [of a song is] all my cousin Maude Ivory needs. That child never forgets anything with a tune." Flash forward to Mockingjay, when Katniss says, "I could memorize almost anything set to music after a round or two."

Then there's the fact that the Mockingjay birds only listen to and pick up songs from some people — Maude being one of them. Katniss says in the first Hunger Games book that they also loved to listen to her father, who would have been Maude's son if the theory is accurate. "My father was particularly fond of mockingjays. When we went hunting, he would whistle or sing complicated songs to them and, after a polite pause, they'd always sing back. Not everyone is treated with such respect," she said.

Katniss also knows at least two of the same songs that Maude knows. "The Hanging Tree" and "Deep in the Meadow," both of which Maude hears Lucy sing. Since the end of the prequel reveals that music was outlawed in District 12, the only way Katniss' dad would have known those songs to pass down to Katniss is if one of the original singers secretly kept the lyrics alive. Who better to do that than young Maude, who could remember whole songs after hearing them only once?

Aside from the musical similarities, Katniss and her father both also knew about the secret lake and cabin in the woods that Maude visits in the prequel, where they pick Katniss plants to eat, the plant Katniss is eventually named after. The math also adds up to allow for Maude to be Katniss' grandma. The prequel takes place about 48 years before Katniss was born, and Maude was eight or nine at the time, according to the book. So if she had Katniss' dad sometime between ages 18 and 28, Katniss' dad would have been able to have his own daughter when he was around 28 to 38 years old.

Author Suzanne Collins has yet to issue a statement on theory — but with evidence this strong, it's looking more and more likely that readers got to meet Katniss' highly talented grandmother in The Ballad of Songbirds and Snakes.

More like this
5 Wild Theories About Miley Cyrus’ “Flowers” Music Video
By Jake Viswanath
'Mayfair Witches' Already Changed 2 Major Characters From The Books
By Grace Wehniainen
Prince Harry Incorrectly Recites Christina Aguilera’s “Genie In A Bottle” Lyrics
By Jake Viswanath
I Read Prince Harry's 'Spare' So You Don’t Have To: 11 Highlights To Know
By Marina Watts
Get Even More From Bustle — Sign Up For The Newsletter
From hair trends to relationship advice, our daily newsletter has everything you need to sound like a person who’s on TikTok, even if you aren’t.