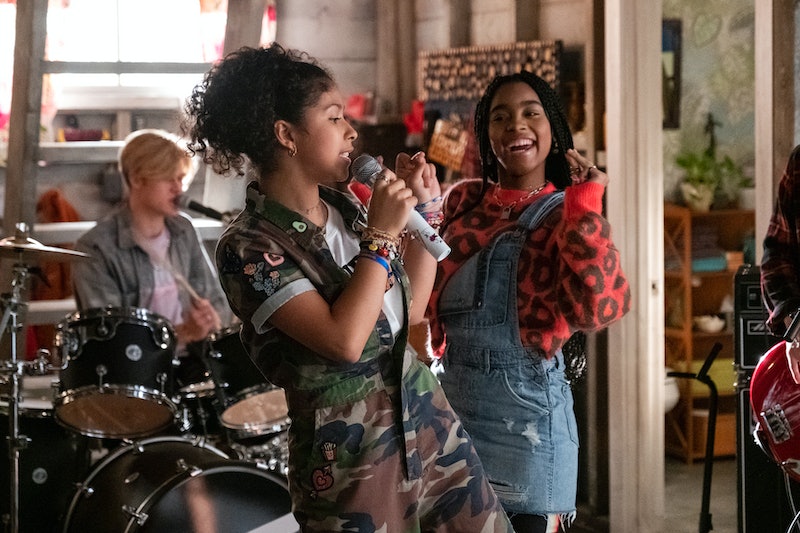 Troy Bolton had his basketballs and, now, Julie has her ghosts. The Julie and the Phantoms trailer dropped on Wednesday, Aug. 26, and it's giving off major High School Musical vibes. The first season of the musical series is coming to Netflix with nine 30-minute episodes in September, and fans of musical DCOMs are definitely going to want to check it out.

The series stars Madison Reyes in the lead role of Julie, who loses her passion for music after the death of her mom. But, she starts singing again thanks to three ghost musicians from 1995 (played by Charlie Gillespie, Owen Patrick Joyner, and Jeremy Shada) who magically appear out of nowhere, because, duh, they're ghosts. Then, their band, Julie and the Phantoms is born. The plot might sound unconventional, but Julie and the Phantoms fits right in with Disney Channel Original Movies like Camp Rock and Lemonade Mouth. Plus, the series comes from Kenny Ortega, who is known for his many Disney projects, including HSM.

The Netflix dramedy is based on Brazil's children TV series Julie e os Fantasmas that was produced by Rede Bandeirantes and also made in partnership with Nickelodeon Brazil. That said, Ortega noted during the virtual CTAM tour in August (via Deadline) that his adaptation will be somewhat different. "We were given complete license to explore through the boundaries of what it was and to begin anew," he said. "That's what excited me. This was really a completely new exploration of the idea."

But, just because this is an American version of the series doesn't mean it's entirely whitewashed. The show's star, 16-year-old Reyes is Puerto Rican and originally from Brooklyn, New York. And, according to Deadline, she's excited about Julie and the Phantoms' representation, pointing out that she's especially happy to playing a character her little sister could relate to. "I wanted her to have someone she could look up to that looked like her and that she could have a connection with, whether it be my ethnicity or curly hair," she said.

More like this
'The Queen’s Gambit' Season 2 Tweet Wasn’t From Anya Taylor-Joy
By Mary Kate McGrath, Jack Irvin and Grace Wehniainen
Ashton Kutcher Wants Danny Masterson “To Be Found Innocent” In Rape Retrial
By Jake Viswanath
At 28, Debra Jo Rupp Was Living A Much Different '70s Show
By Grace Wehniainen
Netflix Shut Down 'Bridgerton' S3 Rumours About A “Very Dark” Storyline
By Bustle
Get Even More From Bustle — Sign Up For The Newsletter
From hair trends to relationship advice, our daily newsletter has everything you need to sound like a person who’s on TikTok, even if you aren’t.