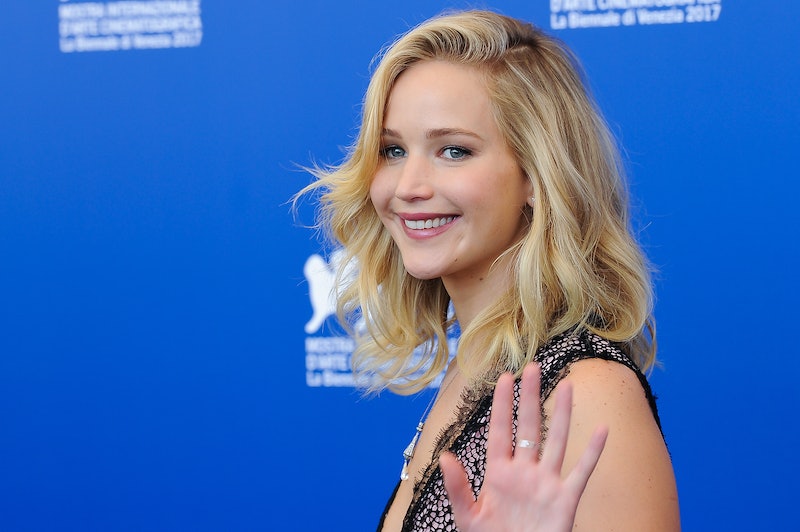 Imagine answering a FaceTime call only to see all of the Kardashian-Jenner women staring at you without saying a word. Well, their celebrity friends now know exactly what that feels like. On Dec. 3, the Kardashians shared TikTok videos of them pranking their pals via FaceTime, and Jennifer Lawrence's reaction to seeing all six women on her iPhone screen at once is absolutely golden.

The prank is relatively simple: Kourtney Kardashian, Kim Kardashian, Khloé Kardashian, Kendall Jenner, and Kylie Jenner all crowd around matriarch Kris Jenner to FaceTime people, give their best power poses, and stay totally silent. This either confuses, amuses, or terrifies their friends. Lawrence, who is a noted fan of Keeping Up With the Kardashians, answered their call almost immediately. "First I had to make sure it was real," the Oscar-winning actor said while holding back laughter and tears of joy. "What is happening?"

Other celebrity victims included Justin and Hailey Bieber, Jaden Smith, Dave Chappelle, James Charles, Addison Rae, Tyler, the Creator, and more. Tyler had arguably had the most wholesome reaction, asking the famous reality stars if they could see him. They also targeted some of the men in their lives, including Tristan Thompson and rapper Travis Scott.

"What's going on?" Scott asked, clearly confused by the expressionless women on his screen. Bieber had a similar reaction and also asked the women what exactly they were doing. Of course, these are all very valid questions, especially when you are on the receiving end of a FaceTime with the KarJenner crew. Addison, for her part, was in the middle of getting her makeup done when she answered the call. "Hi," she said, unable to hide the perplexed reaction on her face.

As fans know, this prank series is just one of the ways the famous reality TV family has been staying active on TikTok. Last week, Kylie uploaded a video to the platform of her and Kendall revealing bits about their personal lives as part of a viral challenge set to Run DMC's "It's Tricky." Together, they walked toward the camera and attempted to separate themselves into one of two categories; the options included "supermodel vs. Instagram model," "mom's fav vs. dad's fav," "hoopers vs. rappers," and many more.

Unfortunately, Kendall and Kylie didn't always agree with each other's selections. At one point, Kylie gave Kendall a piggyback ride to the "staying in" column before sneaking over to the "going out" side. And later, Kendall pulled Kylie over to the "sloppy drunk" side after the Kylie Cosmetics founder tried to label herself a "funny drunk."

Given all of the high-quality TikTok content that the reality stars have given us lately, it's hard to pick a favorite. But after watching Lawrence shocked yet confused response to that unexpected FaceTime call, we're seriously hoping for another installment sometime in the near future.