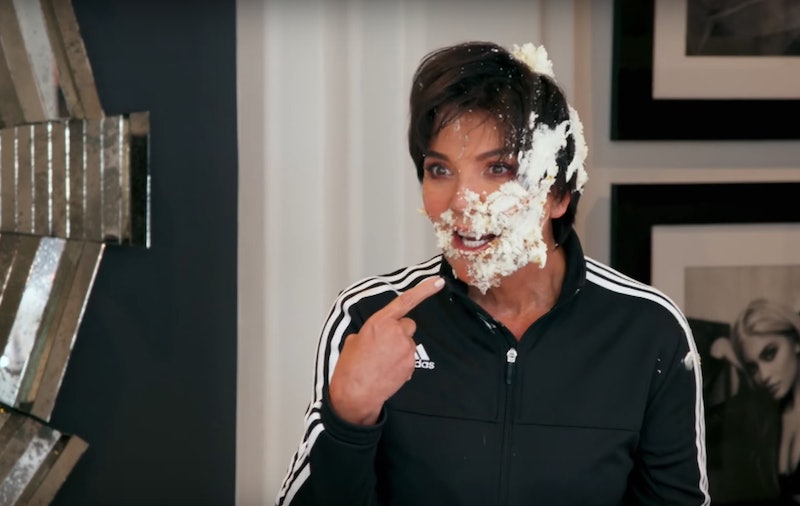 For a reality show that's really just about a famous family being famous, Keeping Up with the Kardashians has involved a lot of pranks over the years. Some of them have seemed natural. Some of them have seemed totally contrived because the episode was missing a C-plot. And some of them aren't what most people would describe as pranks. I mean, two teen girls pretending to go missing while on a family trip abroad? That's just hilarious.

Fifteen seasons of Keeping Up with the Kardashians has aired over the past 12 years, and the frequency of pranks has increased as the show's gone on. I guess you just run low on material at some point. Plus, the episodes went from 30 minutes to an hour after the sixth season, so you've gotta do something to fill the time. It also seems that the Kardashian-Jenners — and Scott Disick who has participated in quite of few of these — do genuinely enjoy pranks and caught on to fan enjoyment of them as well. Is it still contrived if pulling pranks because the show necessitated it actually turned into a real love of pranks that are still part of the lifeblood of KUWTK? Perhaps life imitated art imitated life? Or something like that.

Anyway... some of the pranks are better (and more original) than others. Let's take a walk down memory lane with this ranking of 21 pranks (and "pranks") Keeping Up with the Kardashians has gifted us (and "gifted us") over the past 12 years.

In Season 12, Khloé, Kendall, and Kylie decided get professional prosthetics on their faces so they could go on a Hollywood bus tour without being recognized. They used what sounded like attempts at southern accents, but told everyone they were "from Albuquerque." The whole thing was so cringe-y that it was hard to enjoy.

This was more just straight up revenge meant to annoy Kourtney than a prank. When she was on her way to meet Khloé and Kris for lunch, they kept saying they were changing their minds about the location to get back at her for being indecisive.

This was a prank on Kris' talk show, Kris, which didn't make it past its trial. But, since the filming of the talk show also aired on KUWTK it counts. In the clip, Kris tries to trick her audience into thinking she's debuting baby North, which is awkward and really embarrasses Khloé and Kourtney, who don't want the talk show to be all about their family.

Kendall and Kylie decided to go do their own thing during the family's vacation in Thailand, basically because their parents were annoying them. Obviously, this freaked everyone out — Although, someone on staff must have known they were safe, right? So not really a prank — but the girls were fine and just hanging out on the beach.

This prank didn't make it into an episode, and it's easy to see why. Rob and Scott hid a bunch of alarm clocks in Khloé's home, set to go off one right after the other. "I just don't get what the purpose of this is," Khloé said as if she, as you'll see, hasn't been a part of a million pranks herself.

In Season 14, Khloé hired a mime to be handcuffed to Kris to... make her lighten up? In return, Kris dressed up as a mime to... show she'd lightened up? This one ranks low 'cause mimes are annoying, although Kris' take was kinda cute.

After they dissed the idea of eating one's placenta for alleged health benefits, Kourtney invited her family over for dinner, and after they were done told them they'd eaten human placenta. She let them think this for a while, before later revealing that it was just brisket.

14. Brody Surprises Kim With a Leaf

After Brody walked in on Kim doing a photoshoot with her assistant while wearing a see-through dress, he decided to prank her by waiting on her bed wearing only a banana leaf.

This was a very short-lived one, but when Kris wasn't feeling well, Kim and Kylie decided to tell her it was because Kourtney was poisoning her. Apparently, she very easily believed that her daughter might be tampering with her water, which Kim thought was hilarious.

When Kim started picking on them too much for their outfits and everything else, Khloé and Kourtney decided to refer to her as "Nancy" so they could talk about Kim right in front of her. This lead to them wearing tacky outfits to see if Kim could resist hating on them.

After Khloé wouldn't stop teasing Rob and Malika for being flirty, her brother and best friend decided to take things way over-the-top and pretend they were dating just to piss her off.

This one is a large prank followed by a small revenge prank. Kris kept telling Khloé and Kim that Kylie was giving her presents, which, naturally, made them start competing with each other to buy her better gifts. In the end, they found out and smashed a giant cake on their mom's head.

During the family's trip to Bora Bora, Kendall and Kylie stole Rob's beer to trick Caitlyn into thinking Rob gave it to them. "He said, 'Throw a party!'"

Scott and Kourtney decided to prank Caitlyn and Kris by making a fake sex tape and telling them that it was their own sex tape that they found. Just a really chill thing to do with your family.

Kris used to be a casual smoker, which her family hated, so during this Season 5 episode, Kendall pretended to smoke cigarettes to prove that her mom was a bad influence. Also, as shown in the clip above, Kris' daughters dumped a bunch of water on her head.

Simple, but effective: Kris drank a bunch of wine and made prank calls. (She even brought up the pie controversy.)

Does a flash mob really count as a prank? If you're filming a reality show and don't know your sister is about to join one.

Khloé really puts in work for this show when nothing else is going on. During this episode, she and Kris went out and got drunk, then decided to TP Kim's house.

Even though this one was unsuccessful, it's still funnier and more natural than most. When Kendall fell asleep before them, Khloé and Kourtney asked for prank suggestions on Twitter and decided to go with putting chocolate in her pants so she would think she pooped herself when she woke up. Fortunately or unfortunately, Kendall woke up before it happened.

This prank from the most recent season involved Khloé and Scott tricking Kris into thinking some dude was an up-and-coming artist named Art Vandelay. (They took their name inspiration from Seinfeld and, thankfully, mentioned that on the show.) This prank spanned multiple episodes and also had Khloé making art herself that they claimed was from Art. In the words of one Ms. Kris Jenner, "Your name is Art? And you're in an art gallery? ... And you're an artist?"

And finally, we have the best KUWTK prank of all time. Scott Disick decided to pretend to be Kardashian family friend Todd Kraines and place random calls to Kris. This one went on for so long, with Kourtney and other family members requesting he do it all the time. Like a prank anyone would pull, this one felt organic and really brought everyone involved joy. (Plus, here's what the real Todd Kraines thought of it.)

There you go. Keep your eyes peeled for more good and lame pranks when KUWTK Season 30 airs.