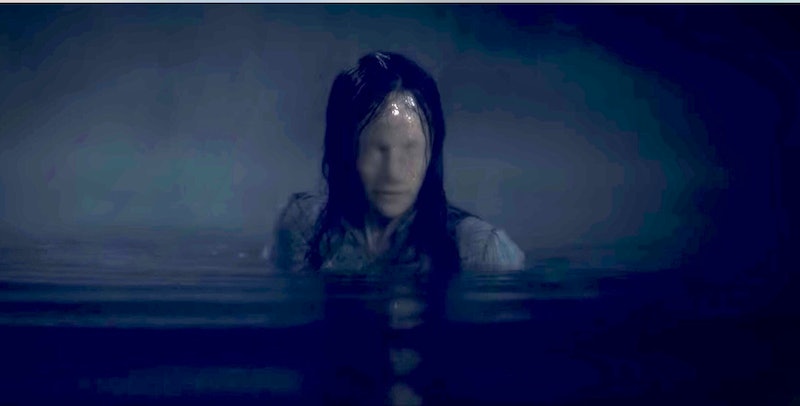 Though Henry James' 1898 horror novella The Turn of the Screw served as the primary inspiration for The Haunting of Bly Manor, the Lady in the Lake comes from another of the author's works. Viola Lloyd, the faceless terror who dwells in the bottom of Bly's lake, originally appeared in James' 1868 short story, The Romance of Certain Old Clothes. But the Netflix series makes a few changes.

"I think of [The Turn of the Screw] as the backbone of this season — the through line that carries us from beginning to end," Bly Manor creator Mike Flanagan explained to GamesRadar+ in 2019. "But we get to go off into The Jolly Corner and The Romance of Certain Old Clothes, and so many other of these wonderful ghost stories that people haven't seen adapted before. It's all wrapped up in what seems to be familiar, but that familiarity goes away really early in the first episode."

Indeed, Bly Manor's Viola Lloyd (played by Kate Siegel) diverges from the literary character. During a 17th century flashback in the show's penultimate episode, we learn that sisters Perdita and Viola used to rule Bly. After marrying a man named Arthur Lloyd, Viola falls ill, and — fed up with tending to her sister for so many years — Perdita eventually murders her. Perdita then remarries Arthur herself, but the two lose their fortune, and one day she breaks into the chest of clothing and jewels Viola left behind for her daughter. Viola's spirit awakens, and she kills Perdita as vengeance. This is where the The Romance of Certain Old Clothes ends — except that it's Perdita, not Viola, who first marries Arthur and meets her demise.

Bly Manor builds on their story. After Arthur dumps the chest of jewels into Bly's lake, Viola takes up residence there. She begins haunting the grounds in search of her daughter, but as her memory (and features) fade, she forgets who she was looking for. Instead, she kills anyone in her path and drags them into the lake, leaving their spirits trapped on the grounds for eternity.

More like this
‘Squid Game’ Creator Hwang Dong-Hyuk Just Dropped A Major Season 2 Tease
By Brian Anthony Hernandez and Bustle Editors
The ‘Emily In Paris’ Season 3 Release Date Is Here, Plus The First Footage
By Bustle Staff
The ‘You’ Season 4 First Look Shows Joe’s New Identity And Potential Victims
By Bustle Editors
New ‘Lupin’ Part 3 Teaser Hints That Assane Will “Go Out In Style”
By Brad Witter
Get Even More From Bustle — Sign Up For The Newsletter