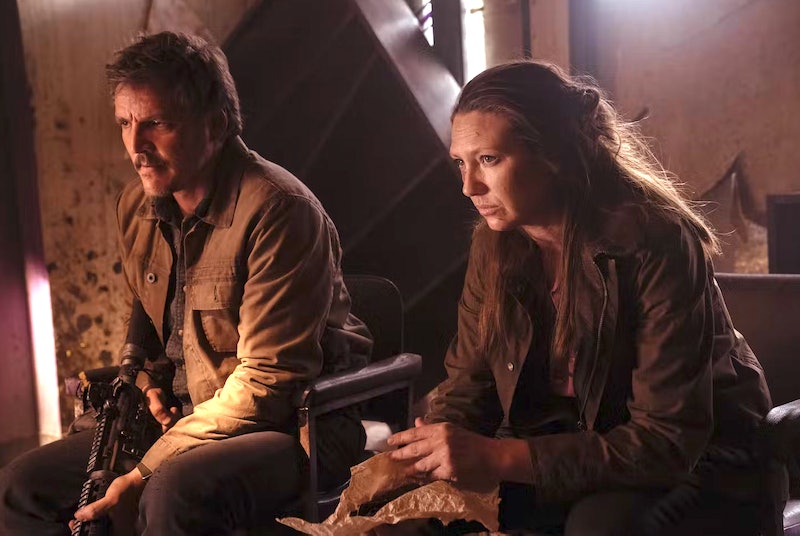 A lot happens in the premiere episode of The Last Of Us, which documents life before and after the Cordyceps infection takes hold of humanity. Now a smuggler inside a quarantine zone in Boston, Joel (Pedro Pascal) works with his partner Tess (Anna Torv) to escort Ellie (Bella Ramsey), a 14-year-old girl immune to the infection, with hopes that she is the key to a cure. The episode ends on a cryptic note, with Depeche Mode’s “Never Let Me Down Again” playing as the trio enters Boston’s contaminated area to transport Ellie in exchange for a truck to find Joel’s brother, Tommy (Gabriel Luna). But what’s the song’s significance, and how does it foreshadow the rest of the series?

Before their journey across an infected Boston, the trio rests in an apartment. Ellie flicks through The Billboard Book of Number 1 Hits, finding a note stuffed between the pages with a code. It reads 60 – Nothing In, 70 – New Stock, and 8 – X, with B/F above them referring to Bill and Frank, characters Joel has been smuggling necessities like food, ammunition, and medicine to and from in the game.

To bide time while Joel sleeps, Ellie deciphers the code to mean that when songs from specific decades play on the radio, it tells Joel and Tess whether there’s stock to retrieve. But if music from the 80s plays, Bill and Frank are in trouble and need help. So Ellie tests her theory by teasing Joel that Wham’s “Wake Me Up Before You Go-Go” played while he was sleeping, confirming the smuggler’s code with his distressed reaction.

At the end of the episode, Joel, Tess, and Ellie are making their way out of Boston’s quarantine zone in a thunderstorm. As they do, the radio in the apartment turns on and plays “Never Let Me Down Again.” Bill and Frank are in trouble, but Joel and Tess aren’t there to receive the message.

Aside from its function as a code, the lyrics also foreshadow events to come. The line “He knows where he’s taking me / Taking me where I want to be” describes the mission to smuggle Ellie, while “Promises me I’m safe as houses / As long as I remember who’s wearing the trousers” foreshadows Joel and Ellie finding safe havens during their journey, and Joel telling Ellie she has to “do what I say when I say it.”

More like this
Everything To Know About The 'Daisy Jones & The Six' TV Series
By Maxine Harrison and Brad Witter
Twitter Is Burning As Phoebe Dynevor Reveals Daphne’s 'Bridgerton' Exit
By Sophie McEvoy
These 5 Words In 'The Last Of Us' Ep 2 Have A *Major* Impact In The Future
By Sophie McEvoy
Alan Carr's 'Changing Ends' Is A Witty Sitcom Based On His Own Life
By Darshita Goyal
Get The Very Best Of Bustle/UK
Sign up for Bustle UK's twice-weekly newsletter, featuring the latest must-watch TV, moving personal stories, and expert advice on the hottest viral buys.