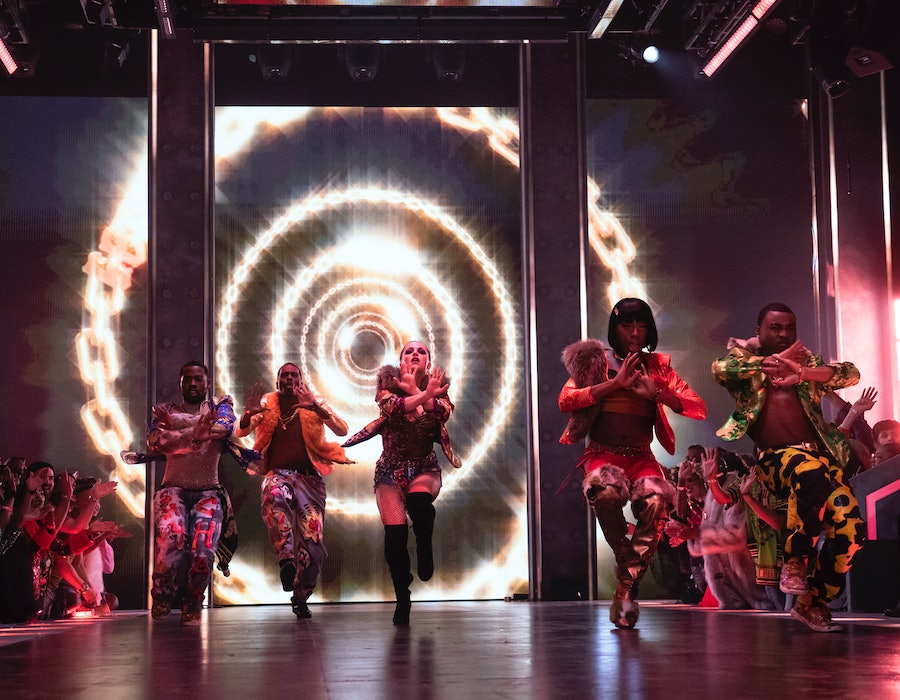 HBO Max launched with a bang on Wednesday, May 27 with the premiere of their ballroom competition show, Legendary. The eight houses depicted in the series will compete in front of a live audience and four judges for a chance to win the ultimate $100,000 prize. But in order to get there, they have to successfully compete in nine different balls, each with a different theme.

The houses in question include more established ballroom communities like the Houses of Ninja and St. Laurent, in addition to newcomers such as Gucci and West. But only one can be crowned the winner, and the competition is steep. These balls will be judged by Law Roach, Megan Thee Stallion, Leiomy Maldonado, and most controversially, The Good Place actor Jameela Jamil, whose inclusion sparked backlash when it was announced in February 2020. Despite the blowback, however, Jamil still appears in the show, while DaShaun Wesley serves as MC and commentator.

"We're looking for an all-around incredible house, the kind of house that just brings the screen alive, that brings the room alive," Jamil told ET Online. "We're looking for technique, but we're also looking for passion and beauty and creativity." Get to know all eight Legendary houses below and decide for yourself which one has what it takes.

The House of Escada

The "iconic" House of Escada, as they call themselves, includes house mother London, Yyoyo, Jazzul, Twilight, and their "secret weapon," Shyanne. "These people matter," London says in their introduction video. "They give me self-worth."

The House of Ebony

Shy, Shorty, Machante, and Xa'Pariis are House of Ebony members, which mother Isla explained in Episode 1 "is historically a black house, named after Ebony Magazine." She continued, saying that as a white woman in a leadership position, she has to "protect a legacy that [she wasn't] born into," and she considers that a "huge honor."

The House of Ninja

Ninja was founded in 1982 by Willi Ninja, and current members include Chise, Jamie, Sharron, Sattva, and house mother Dolores. It remains to be seen how audiences will respond to this group, but Maldonado was quick to welcome these women into the scene. "It is very important for the world to see that the ballroom community is for everyone," she told the House of Ninja after their first performance. "This is a group of cisgender women who are not only dedicated to the community and walking, they come from different places around the world. And it's very important that you guys are here."

The Gorgeous House of Gucci

The House of West

King James founded the House of West when he was 27. "That's something that people say you can't do," he says in Episode 1. "But we literally took the scene by storm." Maurice, Destiny, Wilma, and Buffy round out the crew.

The House of St. Laurent

This house was depicted in the iconic ballroom documentary Paris is Burning, and current members include Mikoko, Champ, Christian, and Pretty. "We are a boutique house," house mother Miss Shalae says in Legendary. "We are very elite."

The House of Lanvin

Makaylah, Packrat, Carlos, Zay Zay, and mother Eyricka are very fashionable members of the House of Lanvin, who decked themselves out in bright red for their debut performance.

The House of Balmain

"When I became house father, I felt like I needed to care for and to uplift," Jamari Balmain says in Episode 1. Cali, Gravity, Calypso, and Torie are all members of the House of Balmain, who chose a cyberpunk theme for their first ball.