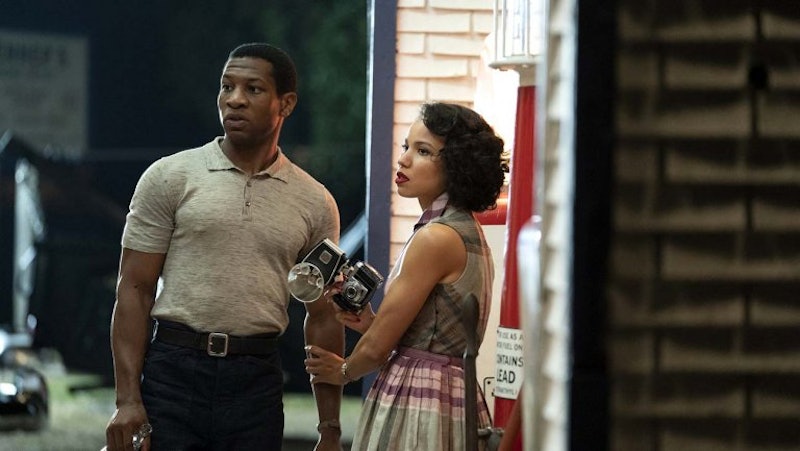 Matt Ruff's Lovecraft Country premieres on HBO this Sunday, Aug. 16, as part of a joint effort between Misha Green, Jordan Peele, and J.J. Abrams. If you're already wondering how Atticus Turner's story will end, look to the 2016 novel for answers. The Lovecraft Country book ending is full of drama, but will ultimately leave you feeling hopeful. Major spoilers for Lovecraft Country ahead.

Lovecraft Country centers on Atticus Turner, a young, Black veteran who returns home to Chicago after the Korean War to find that his father, Montrose, has gone to Ardham, Massachusetts in search of answers about Atticus' mother's heritage. With his uncle George — the publisher of a popular travel guide similar to the Green Book — and his childhood friend Letitia, Atticus heads out for the titular locale, so named because of its frequent use in H.P. Lovecraft's work.

In Massachusetts, Atticus, George, and Letitia find Montrose held captive near an old lodge, owned by the Braithwhite family. As it turns out, Atticus is the great-great-great-great-grandson of the lodge's original owner, Titus Braithwhite, who raped and impregnated Hannah, an enslaved woman in his household. The lodge is now in the care of Samuel Braithwhite and his cocksure son, Caleb, who are descended from Titus' cousin.

Because Atticus is Titus' only living direct descendant, Samuel and Caleb have manipulated him into coming to Ardham to conduct a blood-magic ritual with the Braithwhite-founded cult, the Order of the Ancient Dawn. That ritual will theoretically restore order to the world, as Samuel explains:

"At the dawn of time, just for a moment, everything is where and as it should be, from God to man to woman down to the lowliest wriggling creature.... And then entropy sets to work as it will. Paradise is lost; Babel and the Flood bring confusion and disorder; what was an elegant hierarchy becomes a mess of tribes and nations."

It doesn't take much to understand that Samuel Braithwhite means to summon an eldritch evil to return the United States to the days of nationwide slavery. Ironically, he needs the help of a Black man to do it.

Caleb and his father don't quite see eye-to-eye, so he slips Atticus a secret that will turn the tide. Instead of summoning evil and destroying Atticus' mind, the ritual incinerates Samuel and the other members of his lodge, leaving nothing but ash behind. The Chicagoans return home, hoping to put Ardham and the rest of Lovecraft Country far behind them... but fate has other plans.

Over the next several months, Atticus, George, Letitia, and Montrose continue to run into Caleb, who is making moves to unite the Order of the Ancient Dawn under his own banner. Tired of Braithwhite's evil ways, they hatch a plan to keep Caleb from continuing to use sorcery against them.

After helping Caleb kill the leader of another lodge, Atticus uses his own magical powers to alter Braithwhite's Mark of Cain: a magical tattoo, written in blood, that prevents him from being harmed. Under the new mark, Caleb can't exercise or add to his magical abilities, is no longer immune to harm, and — most importantly — is barred from entering any majority-Black areas of the United States. The Turners and their compatriots abandon him in Indiana, with only a red-lined map to show him where he can and cannot tread.

Rid of the Braithwhite clan for good, the cast return home to Chicago to start a new chapter — one that begins with Atticus, Montrose, and George's 12-year-old son, Horace, lighting out for "Jim Crow country" to write a new edition of The Safe Negro Travel Guide.