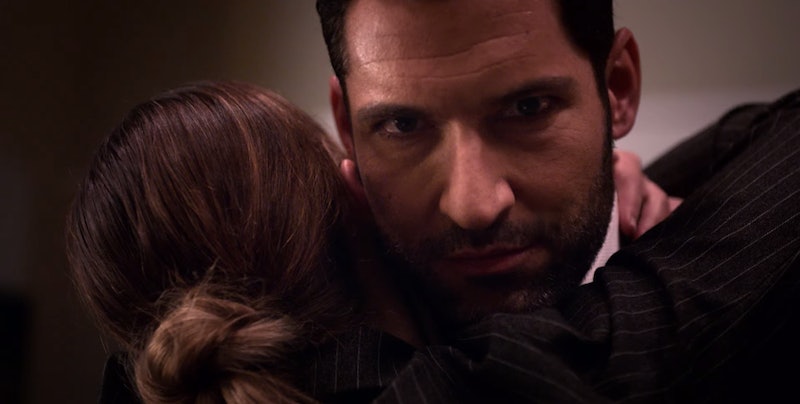 There's a saying that goes, "Better the devil you know than the devil you don't," and, based on the unexpected twist found in the Lucifer Season 5 trailer released by Netflix on Monday, July 13, it couldn't be more true. The trailer features Lucifer's return from hell, and while his absence has been somewhat brief here on Earth, time works a little differently down in Hell, meaning, for him, he's actually been away for thousands of years. At least, that's the excuse he gives for why he's acting a bit differently around everyone, particularly Chloe. But as the footage progresses, the truth behind his behavior is ultimately revealed — he isn't the real Lucifer, but rather his twin brother, Michael.

As for what exactly it is that Michael wants, it appears he's grown quite jealous of his brother's Earthly life and has every intention of taking it away from Lucifer — not to destroy it, but rather to claim it for himself. The only question is, who will become aware of this identity swap and how will it change Lucifer's relationships before he can return (for real) and set everything right. Part of the official description for the season reads: "In the stunning and satisfying fifth season of Lucifer, the stakes are higher than ever. Secrets will be revealed, beloved characters will die, and we’ll finally get an answer to the question, 'will they or won’t they?'"

Many fans have waited patiently to see Lucifer and Chloe finally, um, seal the deal, but now the Season 5 trailer presents fans with a new, agonizing conundrum: if/when it happens... will it be with the wrong man?!?!

As previously reported, Season 5 will consist of a total of 16 episodes, but will be split into the two parts — the first of which will debut on Friday, August 21. As of now, Season 5B has yet to be given an official premiere date. However, with Michael being brought into the picture, viewers will be getting a double dose of Tom Ellis' charm throughout the first installment, which should more than make up for the show's absence over the last 15 months.

But in a Lucifer vs. Michael showdown, who will prove to be victorious? That's one thing fans will have to wait to find out, though based on the real Lucifer's reaction to his brother's antics, he's not a huge fan of being impersonated, which means you better believe there will be hell to pay.