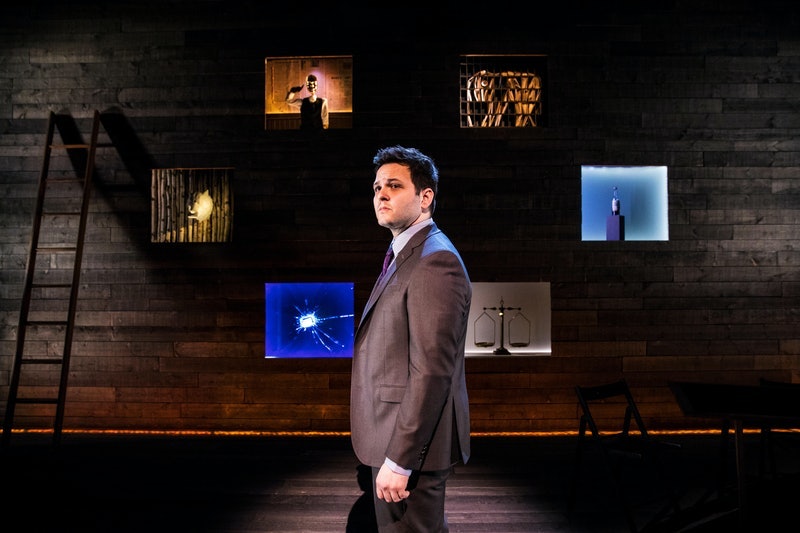 It's exceedingly difficult to describe Derek DelGaudio's In & Of Itself, which is now streaming on Hulu. At its most basic, it's a film of a stage show that is part magic act, part one-man monologue, part performance art, part audience interaction theater experience.

The premise of the show, officially, "tells the story of a man fighting to see through the illusion of his own identity, only to discover that identity itself is an illusion." Honestly, the less you know about it, the better, it simply has to been seen and experienced in order to understand what any of that may mean.

But before going into it, at least know that it's not just about magic tricks. Rather, In & Of Itself is going to have you asking the tough questions about yourself just as they are of the man on stage. Once you've seen it, however, you're probably going to want to know just how he pulled off all of the amazing magic tricks featured in the special. Here's everything we know.

Who Is Derek DelGaudio?

Derek DelGaudio is a magician, just don't call him one. Despite being one of the technical masters of modern magic, he's been trying to extrapolate himself from that label for years. In a 2017 New York Times Magazine profile he was described as the "magician who wants to break magic."

"As soon as you say the word 'magic' or 'magician,' vivid imagery pops into people's minds and their expectations are instantly of what that means to them,” DelGaudio tells Fast Company. "It might be positive, but even the positive version gets in the way of what I'm trying to show them."

DelGaudio has been in the magic and entertainment biz for years and he's incredibly skilled, but, as GQ writes, "Somewhere along the way, he realized he wanted to do something different — weirder, harder, not quite so provincial as card tricks."

What Is In & Of Itself About?

Created by DelGaudio and directed by Frank Oz, In & Of Itself premiered in Los Angeles in 2016 before making its way to an intimate off-Broadway theater in New York City. Once there, the show sold out all 150 seats night after night, and became an off-Broadway phenomenon, running for 72 weeks, 560 performances, and grossing $7 million.

The show is set up as a series of vignettes, all of which have a corresponding diorama embedded in the stage's set. As DelGaudio tells stories about his life, his childhood, and his history learning magic and card skills, he accompanies each story with a mind-blowing "trick."

But jaw-dropping illusions aren't the real goal of this performance. In the film's press notes, DelGaudio details that in the creation of In & Of Itself he, "wanted to explore the illusory nature of identity; how we rely on labels and definitions to identify one another; and how, paradoxically and inevitably, those labels obscure who we really are. It was a theme that had emerged in various ways throughout my life."

These themes of identity and labeling repeat throughout his stories and magical conjurations and come to end at an emotionally overwhelming finale involving the audience and labels that they chose for themselves before entering the theater, the specifics of which are best left unspoiled. Even witnessed through the medium of film, it's a truly unbelievable and mesmerizing experience.

What Magic Tricks Does He Do?

Here's where we get into a bit of spoiler territory, so be warned. DelGaudio does a series of impressive card shuffling tricks as well as other fun card maneuvers. He makes a brick disappear, he puts a paper ship inside a bottle already filled with liquid, and at the end of the show, all of the dioramas that he was previously interacting with suddenly turn into photographs and fall from the wall.

The more impressive tricks come towards the end. In one, Delgaudio has an audience member choose a letter from a pile and read it out loud to the audience. The letter turns out to be from a member of the reader's family, shocking both the reader and the audience in an emotional sequence.

DelGaudio's apotheosis comes at the end. Before the show began, each audience member chose a card off a wall in the lobby. each card had some kind of identifier, such as "I am a doctor," "I am a leader," or more melancholy identities like, "I am nobody," or "I am a failure." DelGaudio goes through the audience one by one, looks them in the eyes, and tells them what they chose.

What?! How Does He Do Any Of This?

Naturally, DelGaudio has kept quiet and refuses to reveal how he does these tricks, and why would he? Some on Reddit have come up with theories, mostly involving mentalism, sleight of hand, hidden earpieces, and other standard magic skills. But anyone who's asking how he pulls off the tricks is asking the wrong questions.

DelGaudio understands that everyone wants to know his secrets. "It's natural. Experiencing a mystery is like being washed out away from shore, like having the tide pull you away. And the first thing you want to do is just swim back to shore as hard as you can. You want solid ground. You want to get back to the thing that you know and understand. And it's really scary to be pulled out into a dark sea," he told The Daily Beast.

But really, knowing how he does the tricks isn't the point. In & Of Itself uses magic more to get us to look at ourselves, look at each other, and understanding that, is the whole point of the show itself.

"That moment of watching people be and feel really, genuinely seen is the magic of the show," DelGaudio tells GQ. "It's all leading up to that single moment of another person looking at another person and just going, 'I see you, man. I see you standing there. I know who you are. I totally get you. In this moment, I see all of you.' And that is like a f*cking gift that we struggle to receive every single day. And because we're all struggling to receive it, we forget to give it."

What's His Next Trick?

With the live performance world still upended these days, it's unclear when we'll next see DelGaudio on stage or what his next performance will be, but maybe that uncertainty is all a part of the act. As he says in the film, "I'm not defined by what you see, I'm also all of the things you will never see."

More like this
Pamela Anderson’s Dating & Marriage History Could Be Its Own TV Series
By Jake Viswanath
Wait, Is Barney Stinson Related To Sophie On 'HIMYF'?
By Gretchen Smail
Pamela Anderson's Sons Brandon & Dylan Have Their Own Hollywood Careers
By Arya Roshanian
Here’s Everything Coming To & Leaving Netflix In February
By Jake Viswanath
Get Even More From Bustle — Sign Up For The Newsletter
From hair trends to relationship advice, our daily newsletter has everything you need to sound like a person who’s on TikTok, even if you aren’t.