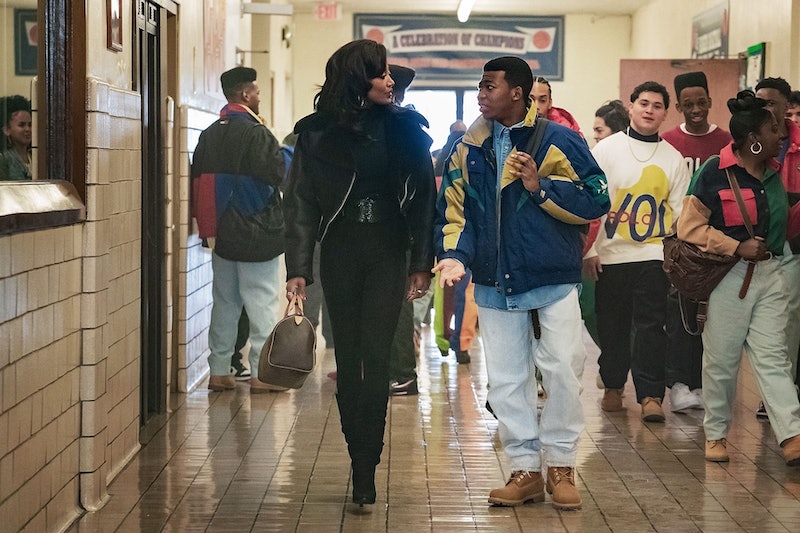 Though Starz's Power ended after Season 6, that doesn't mean viewers have to say goodbye to the world Ghost first introduced us to. Per Deadline, at TCA on Jan. 14, Starz President and CEO Jeffrey Hirsch told journalists that there are currently a total of four Power spinoffs in development and that "some titles are prequels, some sequels, some spinoffs.”

“There’s a lot of rich characters that we can choose to pull out,” Hirsch explained. At the time, he was tightlipped about which characters would feature in each project because then “you’d know who does and who doesn’t die” in the finale, which aired on Feb. 9. Hirsch was quick to assure journalists that the spinoff scripts are "good, if not better, than what [Power creator] Courtney Kemp put together” for the original show, though.

This all sounds very vague, but we know at least none of the sequels will be about Ghost. In a Jan. 5 interview with Entertainment Weekly, Kemp confirmed that after Ghost was shot in the November midseason finale, "Ghost is definitely dead." It's still not clear yet if Ghost will figure in any prequel titles, though.

There's clearly a lot of moving parts to this, but let's go over what we know so far about the numerous projects.

This was the first sequel to debut in the summer (with 50 Cent telling Ryan Seacrest in an interview that it would air in June 2020). 50 Cent told USA Today that Ghost takes place just 48 hours after the Power series finale.

Per Entertainment Weekly, Kemp confirmed that Ghost will star Mary J. Blige as Monet, a successful Queens businesswoman who runs her dealings "with an iron fist." Method Man will also feature as an "ethically challenged lawyer."

“For Mary’s character, we use all the power and presence of the actress to communicate how this is a woman who is remarkable and unique in her abilities," explained Kemp. "She’s as smart, savvy, and strategic as Ghost ever was, but her learning doesn’t come from books. We always said Ghost was a bookish kid who read all the time. This woman’s acumen comes from the street.”

That's not to say the sequel is only new characters, though. Ghost will “continue the journey” of some of Power's “most controversial characters,” Kemp promised at TCA.

In 2021, Season 2 of the sequel was greenlit and is expected to air come September.

On April 26, 2021, Starz announced that this prequel is set to premiere on July 18 on the platform. Originally played by 50 Cent, the series will focus on a younger Kanan Stark, played by 20-year-old actor Mekai Curtis. Per Starz, also set to appear in the series are Patina Miller (The Hunger Games), Omar Epps (House), London Brown (Ballers), Malcolm Mays (Them), Hailey Kilgore (Respect), rapper Joey Bada$$, Toby Sandeman (The Royals), Shanley Caswell (The Conjuring), Lovie Simone (The Craft: Legacy), and Quincy Brown (Dope). Serving as its showrunner is Sascha Penn, who will also executive produce the series alongside 50 Cent and Power creator Courtney A. Kemp.

Set in South Jamaica Queens in the early ’90s, the drama series will focus on Stark as he comes of age. Fans know that the character was tragically murdered at the end of Power, though Raising Kanan finds him at age 15, living as the only child of Raquel “Raq” Thomas (Miller). According to Starz, it centers on “themes of identity, violence, and legacy” with a focus on learning to navigate complicated family dynamics.

In a 2018 Instagram post, 50 Cent wrote that his Power prequel would show "the Golden Age Era" influencing the Southside, beginning in 1988.

"I created new music specifically for Power Book III," 50 Cent told USA Today. "I've been producing and writing stuff for it because it's hard to find things that feel authentic to that time period. You've got to make this stuff feel like it was produced in the '90s."

As for Power Book IV: Force, it “centers around Tommy Egan, played by Joseph Sikora, after he cuts ties and puts New York in his rearview mirror for good,” according to Deadline. Rounding out the main cast are actors Lili Simmons (Ray Donovan), Gabrielle Ryan (The Haves and the Have Nots), Isaac Keys (Get Shorty), Shane Harper (Hightown), Kris D. Lofton (Empire), Anthony Fleming III (Prison Break), Lucien Cambric (The Chi), and Tommy Flanagan (Guardians of the Galaxy Vol. 2).

When it comes to the completely untitled fourth project that Kemp hinted at during TCA, we don't yet have any details, but it could be called Power Book V: Influence after the Power Book IV title was changed to Force.

Samuel Spencer at Newsweek surmises that these mysterious Power spinoffs can center on any number of characters. One option would be a political story centered around Ramona and Tate, who became the Democratic nominee for the Governor of New York after betraying Ramona. Still, other options include a show about Ghost's son Tariq, or a prequel show featuring a young Ghost.

It's clear Starz sees endless potential with Power, and it's likely only a matter of time before they hammer out the details about the other titles. Ultimately, fans can take comfort in the fact that while present-day Ghost may be gone, it's not really goodbye.

More like this
The First Trailer For 'That '90s Show' Includes So Many Nods To The Original Series
By Jack Irvin, Alyssa Lapid and Grace Wehniainen
'Bridgerton' S3 Teases Exciting Social Season For Penelope Featherington
By Bustle
What Jen Shah's Delayed Sentencing Could Mean For The 'RHOSLC' Season 3 Reunion
By Brad Witter and Jake Viswanath
What To Know About Simon Guobadia’s 3 Ex-Wives & Children
By Brad Witter
Get Even More From Bustle — Sign Up For The Newsletter

This article was originally published on Feb. 8, 2020