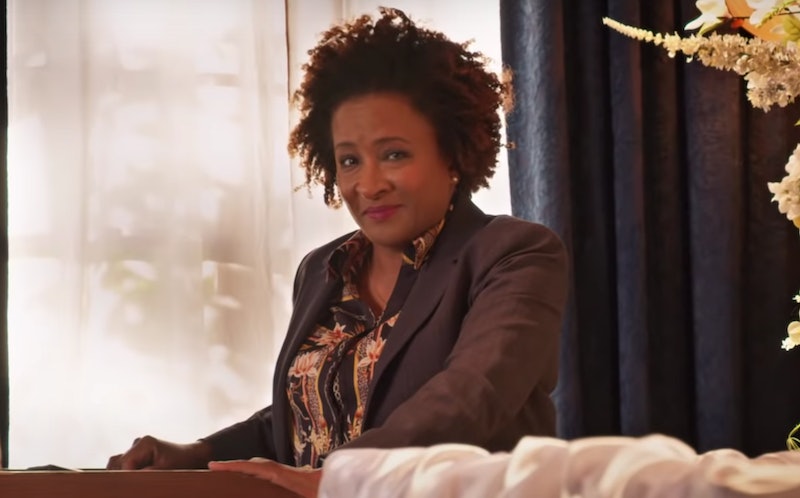 Quibi shows may be short, but they manage to pack a lot of celebrities into the few minutes they last. Case in point: the Mapleworth Murders cast is absolutely filled with big names who even some streaming giants would have a hard time landing. Or, at the very least, bagging all in one show.

The extensive cameo list can be credited to good timing and good connections. As Newsweek reported, the series taped in November and December of last year, when the holiday season meant that there weren't many other work conflicts for the actors. Co-creators and stars Paula Pell and John Lutz also have a ton of famous friends thanks to their time as writers on Saturday Night Live, which undoubtedly made it easier to get people onboard.

The constants throughout the episodes are the four main cast members, who work to solve murder mysteries together in a town that keeps getting struck with homicide after homicide. (Seriously, why do we not talk more about how dangerous the towns in crime procedurals seem to be? A murder every week?)

Here are all of the celebs you can expect to pop up throughout the show — hopefully not on the wrong end of a case.

According to Deadline, the SNL writer plays lead character Abigail, a murder mystery author who helps to solve every local homicide.

Per Screenrant, the 30 Rock alum plays a bumbling detective who can't ever seem to solve the murders that Mapleworth can.

The Last O.G. and Curb Your Enthusiasm actor plays Chief Bills, who works with Pewntz to crack cases but is just as blundering as his co-worker, per Screenrant.

As Newsweek reported, Heidi is Mapleworth's niece. She's a total millennial who constantly takes selfies at crime scenes, much to her aunt's chagrin.

As for Magnus, she's acting for a decade in projects like The Dressmaker, Cake, The Wrong Girl, and more.

The Guest Stars To Watch Out For

A lot of the cameos on Mapleworth Murders come courtesy of the SNL connections that Pell, Lutz, and executive producers Lorne Michaels and Seth Meyers have. According to Deadline, Fred Armisen, Maya Rudolph, Tina Fey, and Andy Samberg are all set to guest star in episodes. Also showing up this season are The Mindy Project's Ike Barinholtz, 30 Rock's Jack McBrayer, Patton Oswalt, Terry Crews, Wanda Sykes, and Nicole Byer.

Basically, come for the comedic take on the murder mystery genre, stay for the reunion of a bunch of SNL stars and other A-list actors.